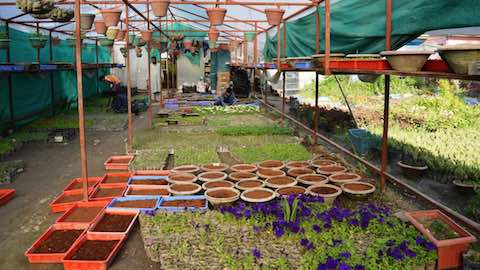 As the Himalayan region struggles with unemployment and the loss of large swathes of its agricultural land to construction, local farmers are being won over to floriculture

As soon as his son graduated from college, Ghulam Mohi-u-Din Dar asked him to take care of the family flower business in Kral Sangri, near Srinagar, the largest city in Indian-administered Kashmir.

"I knew it would be a waste of time for him to search for a job in the government or private sector," Dar said, referring to the dearth of local employment opportunities.

Years of running his small business had given Dar, who left school after 10th grade around age 16, a sense of how his son's higher education level could help him make a success of things.

Since Fayaz Ahmad started managing the business five years ago, it has flourished, said Dar.

As the Himalayan region struggles with unemployment and the loss of large swathes of its agricultural land to construction, local farmers are being won over to floriculture.

Most Kashmiris have traditionally earned their living from farming, but rising numbers are selling their land, complaining they earn too little from growing traditional crops such as rice and maize, due to small plot sizes and low yields.

While directing labourers in one of his polyhouses, Ahmad said he was enjoying life as an entrepreneur.

Previously, the family grew flowers on a tiny patch of land, but that has now expanded to a quarter of an acre. 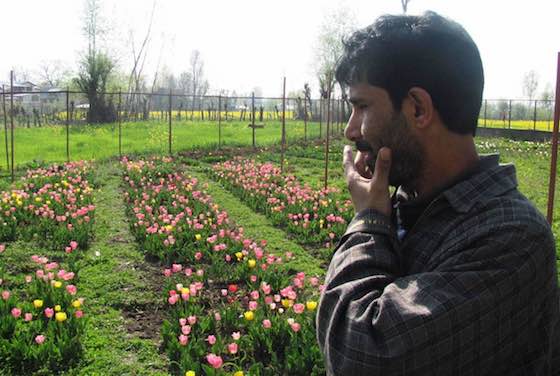 Fayaz Ahmad, an agricultural entrepreneur in Harwan in Indian-administered Kashmir, looks at the tulips growing on his farm. Thomson Reuters Foundation/Athar Parvaiz

Rubeena Begam, a flower grower in central Kashmir's Budgam district who once dreamed of a government job, now has more than 60 people working for her.

She has 15 polyhouses where she cultivates flowers like lilium, gladiolus, gerberas and carnations, and has recently leased 50 acres to plant Bulgarian roses and lavender.

Cut flowers from her farm are picked up by distributors who take them to major urban centres like New Delhi, Mumbai and Hyderabad, where flowers for religious festivals, marriage ceremonies and temple offerings are in high demand.

Weddings in Kashmir and demand from hundreds of hotels across the region provide a local market for flower growers.

With the start of the marriage season in early May, Fayaz Mir, a flower grower in Harwan, 15 km northeast of Srinagar, was a busy man. "I have got orders for flower decorations for three weddings," he said, before Ramadan began late in the month.

"Today, if I have a good house in Srinagar, a house in Jammu and a flat in New Delhi, it is all because of my flower business," he told the Thomson Reuters Foundation in a quieter moment.

Ali Mohammad, a farmer in Khanda-Budgam, said he had been able to educate his four sons thanks to the money he earned from growing flowers.

According to Kashmir's floriculture director, Mohammad Hussain, around 2,000 farmers are cultivating flowers in the region, many as successfully as Mir and Mohammad.

An average farmer can earn an additional annual income of $3,000 growing flowers alongside other activities such as rice and apple production, said Hussain.

His department is now setting up flower cultivation clusters in various parts of Kashmir to offer support, including expert guidance, cold storage and marketing advice.

Officials said growers are reporting interest from buyers in other Asian countries such as Singapore, Malaysia and Japan. 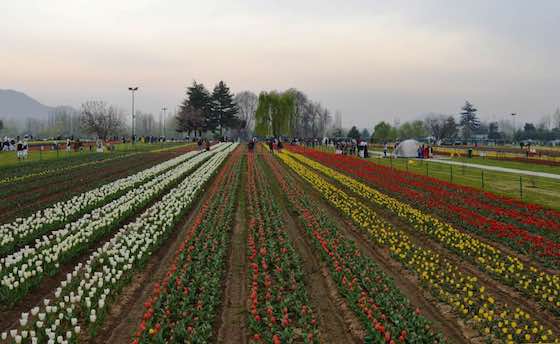 Nazki said Kashmir's flower market is expected to touch 100 crore rupees (about $15 million) in the next three years.

"More than cut flowers, our main strength is bulbs or seeds," he said. "We have both dry and rainy seasons here - which is much better than in countries like the Netherlands where flower cultivation is done on a massive scale."

But Kashmir farmers need large subsidies to cultivate flower bulbs, as they must spend a lot upfront on equipment and importing bulbs.

Ever since Kashmir's Tourism Department set up the 33-hectare Indira Gandhi Memorial Tulip Garden in Srinagar near the Dal Lake in the Zabarwan foothills in 2008, Kashmir has been able to attract tourists earlier in the year.

The garden was created with the help of Dutch agricultural experts who, after visiting the region, said its climate was suitable for growing the spring flowers.

Nazir Ahmad Reshi, who is in charge of the garden, said more than 2 million tulips of different varieties and colours draw hundreds of thousands of tourists to Kashmir from as early as the end of March, compared with the traditional start to the season in mid-May.