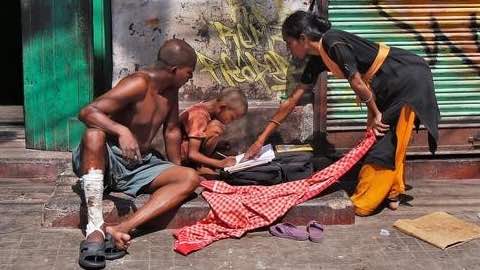 The Indian government is doling out incentives to people to buy affordable homes as officials race to meet a 2022 deadline of providing housing for all, but campaigners say the measures won't fix the problem of homelessness.

Prime Minister Narendra Modi recently extended subsidised loans for building or expanding homes in rural areas, as well as for the urban poor. The federal budget, due on Feb. 1, may have even more perks for the sector, analysts say.

"There is every reason to expect a significant boost for affordable housing in the upcoming budget," said Anuj Puri, country head of real estate consultancy Jones Lang LaSalle.

The government plan, to provide housing for all by 2022, is meant to create 20 million new urban housing units and 30 million rural homes.

The federal scheme initially offered lower interest rates for loans up to 600,000 rupees. Modi last month extended subsidies for loans up to 1.2 million rupees, seen as benefiting young couples who are first-time homebuyers.

Yet the pace of implementation of the housing scheme has been slow, with only 2,776 houses built in urban areas from June 2015 to August 2016, according to advocacy group Housing and Land Rights Network (HLRN).

In rural areas, more than 1 million homes were built.

"The slow rate of implementation of the policy, coupled with the destruction of homes makes the housing for all target seem improbable at this stage," said Shivani Chaudhry, executive director at HLRN.

"Just giving cheaper loans is not going to solve the problem. What we also need is increased allocations for homeless shelters and social rental housing in urban areas for migrant workers and the poor," she told the Thomson Reuters Foundation.

Up to 37 million households - a quarter of India's urban population - live in informal housing including slums, according to social consultancy FSG.

Many of them lack steady incomes and documents essential to secure bank loans, even as a growing population and rapid urbanisation are expected to exacerbate the housing shortage.

It may also help burnish India's credentials in social sector spending, which lags even other developing nations, HSBC said in a report.

"Given the mismatch with the election cycles ... India's quantity and quality of social sector spending is inadequate by global and other emerging market standards," HSBC India said.

"This is the tragedy of the social sector."