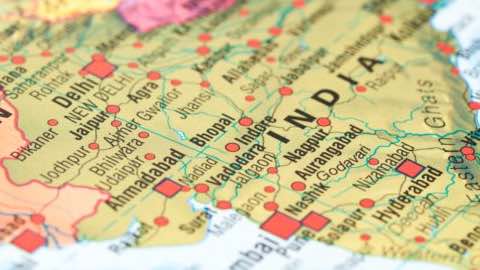 What should India's foreign policy focus on in the years ahead? The answer, according to Manish Tewari, is twofold. India should work to contain Chinese expansionism in the South China Sea; and leverage its unique experience to help the West respond to radical Islamism.

India’s strategic and foreign-policy choices over the coming decades will require it to revisit its central principles. What is India today and what version of India should its policies serve? Should territorial limits alone define India’s foreign policy, or should it include its hydrocarbon interests in Africa, Latin America, Russia, and the Middle East? Should it extend to the defence of the Indian diaspora (including its wealth and resources), and the transnational corporate empires of Indian oligarchs? Would India be prepared to leverage its hard power to protect and preserve these interests? Who should India engage with in the world, given that it is not only nations that affect India’s interests, but also non-state actors, rogue states, and private interests?

Is it time to open either formal talks or backchannels with these actors – for instance, with the Afghan Taliban or with the Somali tribes that have elevated piracy to statecraft? A separate question is whether India should engage in full diplomatic relations with Taiwan, either within or outside the “One China” architecture. Another uncertainty is the relationship with Iran: until recently, the United States and its allies wanted India to reduce imports of Iranian oil to less than 10 percent of its total imports, but following the nuclear deal India may seek enhanced engagement with Iran to offset Chinese power in the region. Do its bridges with Iran still exist?

Does India have the institutional and intellectual nimbleness to adapt to these shifting sands of realpolitik? There are multiple answers to these dilemmas, and no “one-size-fits-all” response. Unfortunately, the Indian establishment has not even begun to ask itself these questions, and no substantive debate has begun, either inside or outside government.

A t the same time, global debates filter into India’s thinking on international affairs. These exchanges include (but are not restricted to): the efficacy of the neoliberal economic order in addressing poverty and deprivation, and the human impact of the doctrines of regime change and the responsibility to protect. They also include balancing the principle of climate justice with the impact of climate change around the world, restructuring the institutions of global governance to reflect the geopolitical realities of the twenty-first century, balancing the fight against terrorism with the preservation of civil liberties, and campaigning for defined rules of engagement in cyberspace. Notwithstanding the challenges that need to be surmounted in the arena of strategic conceptual thinking, India has the capacity to play a key role on two issues of global import. The first is containing Chinese aggression in the South China Sea, and the second involves leveraging its unique experience to help the West respond to the spectre of radical Islamism.

There are medium-term strategic opportunities for India to both east and west. The first such prospect lies in the fallout from the China–Pakistan Economic Corridor (CPEC), which will affect Chinese territorial claims in the South China Sea. China funded a $34 billion network of highways, railways, and pipelines across the length of Pakistan to transport oil and gas from the Pakistani port of Gwadar to the Chinese city of Kashgar, in order to resolve the “Malacca dilemma” – China’s dependency on the Malacca Straits, which connect the Pacific and Indian Oceans, for oil and gas imports. Resolving this issue via the Pakistan corridor could diminish the ability of other states to use Malacca as leverage and lead to increased Chinese pugnacity in the South China Sea, as it would seek to act on its historical claims in the region. The question would then be: how to restrain China?

That is where India becomes relevant to the countries of east and even north Asia, as it sits on the head of the Indian Ocean straddling the sea lanes of commerce from the choke points of the Straits of Hormuz right up to the Malacca Straits. Its airbase in Campbell Bay (Nicobar Islands) is just 240km from the mouth of the Malacca Straits. Even with the Pakistan economic corridor in place, a bulk of the equity minerals and other resources extracted by the Chinese would still have to traverse the Indian Ocean, Andaman Sea, and the Bay of Bengal right below India’s perch, providing it with a unique opportunity to act as a balancer against Chinese brazenness in the South China Sea.

Collective security cooperation could then provide the necessary thrust for India and the southeast, east, and north Asian countries to move towards a closer strategic embrace, notwithstanding their individual economic links with China. From the Indian perspective, it could transform the concept of the “Indo-Pacific” – a definition of the region that includes both oceans – into a strategic and economic reality. It may eventually pave the way for a loose coalition between India, the US, Indonesia, Malaysia, Vietnam, the Philippines, Taiwan, South Korea, Japan, and even Australia, which could ultimately be the only option for keeping the global commons open across the Indian and Pacific Oceans in the decades ahead. Because the South China Sea is at the conjunction of these two oceans, keeping it stable and protected from Chinese belligerence would become India’s primary strategic task in the decades ahead. An obvious spin-off from closer security cooperation would be a further deepening of trade and commerce with these countries. Enhanced economic and cultural interaction would not only add to India’s prosperity, but also provide additional avenues for the exercise of soft power.

As India turns its gaze west it sees the forces of religious bigotry and unabashed brutality galloping across the region, erasing territorial boundaries. The attempt to reorder the Middle East once again following the dismemberment of the Ottoman Empire has miscarried miserably as civil wars rage across the region. Europe, at the same time, is overwhelmed with the blowback of refugees as millions flee the war zones.

However, in this tragedy lies another opportunity for India. As al-Qaeda, Islamic State (IS), the Taliban, and numerous other militant Islamist groups prepare for the final push from Turkey to Pakistan in Asia, it would leave the countries of Europe and the few democracies of west Asia with no option but to cooperate more closely with each other.

Not only would closer security cooperation become an imperative, but also, at a syncretic level, India can offer its unique experience, having been for centuries the interface between an aggressive Islam and multi-religiosity. India is perhaps the only country which, from 1000 AD onwards, has synthesised Islamic influence by assimilating it into its culture without allowing it to fundamentally alter its social ethos. Despite the sword, India did not allow Islam to substantially alter the demographics or even the cultural moorings of the subcontinent. It created, through assimilation as opposed to a clash of civilisations, an enlightened version of Indian Islam which has existed cheekby- jowl alongside other faiths for hundreds of years.

India offered its experience to the US after 9/11 as a means to find an honourable accommodation with Islam in the long run, but the binary mindset of the Bush administration failed to grasp the lesson. The Pentagon’s Office of Net Assessment and the then-Indian government’s foreign-policy strategists engaged with each other, but the US officials did not have the patience to wade through the subtleties and complexities.1

Without learning from India’s experience, the challenge of reining in revivalism and its brutal manifestations will continue to bedevil the liberal compact. On a different level, since the US remains the power balancer, despite its disastrous policies in the Middle East, and since Israel has an existential stake in the stability of the region, a trilateral axis between the three powers may become a necessity, despite India’s position in favour of a Palestinian state. This again would translate into enhanced cooperation across a wide spectrum that could benefit India in more ways than one.

What are the internal constraints that inhibit India from taking on these issues and occupying its natural place in the global order? They include non-traditional security challenges. For example, on World Population Day – 16 July 2015 – India officially reached the 1.27 billion mark. The socio-economic data, as benchmarked by the deprivation index, tells an alarming tale: notwithstanding ten years of robust state intervention, large sections of the population remain very vulnerable. Providing quality education, generating 12 million jobs annually, and dealing with the growing frustration among large sections of overqualified young people doing below-par jobs remains a challenge.

Large areas of central and eastern India are still in the grip of leftwing extremism, while the Indian state has a limited footprint. The northeast as well as the northwest periphery continues to simmer. What India requires at the moment is two decades of “internal consolidation”, and for that it requires peace on its borders, which remains elusive.

India would have to develop its own version of “exceptionalism” to engage with the world as it consolidates internally. Therein lies the dilemma for the Indian policymaker. Strategic opportunities do not remain open indefinitely, but the Indian state lacks the institutional capacity to deal with the world and its country simultaneously.

1 Based on the author’s conversations with the late RK Mishra, member of India’s parliament and former editor of the Patriot. He was Prime Minister Vajpayee’s backchannel to Prime Minister Nawaz Sharif in the early years of Vajpayee’s administration.