India's Choice in the Maldives 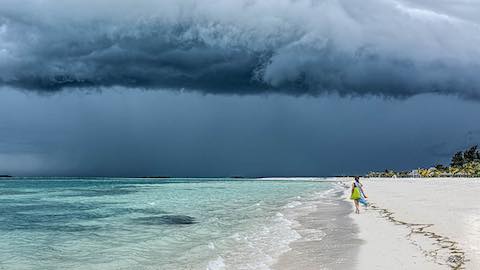 India's Choice in the Maldives

The Maldives -- that beautiful Indian Ocean country comprising more than 1,000 coral islands -- is known the world over as a tranquil and luxurious travel destination. But the country is now being roiled by a political crisis so severe that international advisories are cautioning against travel there.

The rule of law in the Maldives has been steadily deteriorating ever since President Abdulla Yameen came to power in 2013. The situation escalated sharply earlier this month, when Yameen refused to comply with the Supreme Court's unanimous order quashing the convictions, which he had engineered, of nine opposition figures -- including the exiled former president, Mohamed Nasheed -- on terrorism charges. Instead of freeing those whose sentences were nullified, Yameen declared a state of emergency and jailed two of the Supreme Court's five judges, including the chief justice.

To be sure, authoritarianism is not new to the Maldives. Indeed, Nasheed is the only democratically elected, non-autocratic president the country has had since it gained independence from Britain in 1965. His tenure lasted just over three years, until, in 2012, he was forced at gunpoint to resign.

But the Maldives' sordid politics is having an increasingly far-reaching impact, not least because it is closely linked to radical Islam. On the day Nasheed was overthrown, Islamists ransacked the Maldives' main museum, smashing priceless Buddhist and Hindu statues and erasing all evidence of the country's pre-Islamic roots. On a per capita basis, the Maldives has sent the highest number of foreign fighters to support terrorist groups in Syria and Iraq.

Moreover, the Maldives sits astride critical shipping lanes in the Indian Ocean, making it vital to security in the region. As a result, the country's deteriorating political conditions are increasingly capturing the international community's attention. Democratic powers, from the United States to India, are calling upon the United Nations to intervene in the crisis, while China, seeking to advance its own interests in the Indian Ocean, is defending the graft-tainted Yameen.

The increasingly close relationship between China and the Maldives represents a significant shift from the past, when India was the country's primary regional partner. Maldivians are mainly of Indian and Sri Lankan origin, and have strong cultural and economic ties to those countries. Their country has traditionally been viewed as part of India's sphere of influence.

But, in recent years, China has been eroding India's influence in the Maldives, as part of its effort to build its 'string of pearls': a chain of military installations and economic projects aimed at projecting Chinese power in the Indian Ocean. Just as China recently secured the Sri Lankan port of Hambantota on a 99-year lease, it has, according to Nasheed, quietly acquired 17 islands in the heavily indebted Maldives for investment purposes.

But, betraying its strategic objectives, China has also sent warships to visit the Maldives. If China, which has stepped up military pressure on India along their Himalayan frontier, turned one of the Maldivian islands into a naval base, it would effectively open a maritime front against India -- a milestone in China's strategic encirclement of its neighbour.

The Maldivian crisis thus is a defining moment for India. Will India intervene militarily, as Nasheed and other Maldivian opposition leaders have requested, or will it allow Yameen to continue to enable China to pursue its strategic objectives in the region?

There is some precedent for an Indian military intervention in the Maldives. In 1988, India snuffed out a coup attempt against the autocratic Maumoon Abdul Gayoom engineered by a Maldivian businessman with the aid of armed mercenaries, especially Sri Lankan Tamil separatists. Thanks to India's swift military action, Gayoom would hold onto power for another two decades.

Yet when the country's first and only democratically elected president beseeched India in 2012 to rescue him from the Islamist forces laying siege to his office, India looked the other way. India's government felt betrayed by Nasheed's own burgeoning relationship with China. Not only had Nasheed awarded China its first infrastructure contracts; just three months before his ouster, he had inaugurated the new Chinese embassy in the capital, Malé, on the same day that India's then-prime minister, Manmohan Singh, arrived for a regional summit.

Today, an Indian intervention could be dicey, not least because no legitimate authority is inviting India to send in forces. Indian paratroopers could gain effective control of Malé within a few hours. But what would the endgame be? Amid rising Islamist influence and shifting political allegiances among the handful of powerful families that dominate the Maldives' economy and politics, finding reliable allies committed to -- much less capable of -- protecting democratic freedoms would prove a daunting challenge.

Moreover, even if Yameen were ousted and the country held a democratic election, it is unlikely that China's influence could be contained. As the experiences of Bangladesh, Myanmar, Nepal and Sri Lanka illustrate, China has outmaneuvered India diplomatically, even when dealing with democratically elected governments. Indeed, it did so in the Maldives itself, with Nasheed. Because the country's debt will continue to rise, regardless of its leadership, China will retain its favourite source of leverage.

India, with its proximity and historical ties to the Maldives, may seem to hold a strong hand. But it has a lot to lose if it aggravates an already volatile political situation in its maritime backyard by intervening militarily.

India's best option is to hold out a credible threat of military action, while imposing, together with other democratic powers, economic sanctions that undercut support for Yameen among the Maldivian elite, many of whom own the luxury resorts that now have far too many empty rooms. With them on side, perhaps the international community would be able to ensure that the presidential election scheduled for later this year is fair and inclusive -- and supervised by the UN. That is the only way to end the crisis, and restore peace to an Indian Ocean paradise.

Brahma Chellaney, professor of strategic studies at the New Delhi-based Center for Policy Research and fellow at the Robert Bosch Academy in Berlin, is the author of nine books, , including Asian juggernaut, Water: Asia's new battleground and Water, peace, and war: confronting the global water crisis. This article is presented in partnership with Project Syndicate © 2018. Image courtesy of Roberto Saltori.

"India's Choice in the Maldives"