India Builds Up Its Northeast 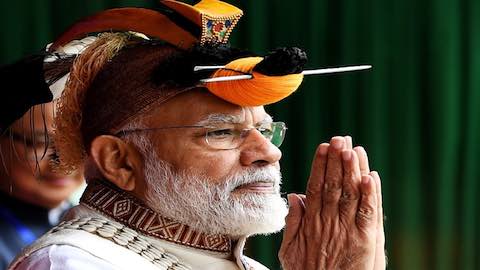 The Indian government is ploughing ahead with its plans to develop the country's northeast, including the state of Arunachal Pradesh, which China claims as its own territory.

Prime Minister Narendra Modi laid the foundation stone for an important airport in a remote part of the state and announced development plans worth almost $800 million. Those moves provoked an angry response from Beijing. The Chinese government issued a sharp statement, saying it was ‘firmly opposed to the Indian leader's visit to the eastern section of the Sino-Indian border'. New Delhi dismissed the criticism, affirming that the state is ‘an integral and inalienable part of India'. It's worth noting that this is nothing new; China routinely protests visits by Indian leaders to Arunachal Pradesh, as it did with Modi's visit last year.

Despite the ‘reset' in the Sino-Indian relationship said to be in place since the 2018 Wuhan summit between Modi and Chinese President Xi Jinping, and the fact that India is careful to avoid trampling Chinese sensitivities elsewhere, such as on its position on the Quadrilateral Security Dialogue, New Delhi isn't refraining from behaving assertively where its core interests are concerned. In other words, the reset hasn't brought a fundamental change in the relationship and is better viewed as an attempt at buying temporary peace.

Reflecting on the Modi--Xi summit, Indian Minister of State for External Affairs V.K. Singh recently said that while the two leaders discussed the ‘red lines' in the relationship, they left boundary disputes aside, to be decided by the mechanisms already in place. He added that ‘it was a conscious decision to develop the relationship in different areas and focus on people-to-people contacts, economics, commerce [and] investments' in order to de-escalate ‘those fixations and hard stances that exist'. India is the only country with which China still has a major and ongoing land border dispute.

Chinese claims over Arunachal Pradesh have grown substantially over the past couple of decades. In the mid-1980s, Beijing only laid claims over a region called Tawang, but in the 2000s it started claiming all of Arunachal Pradesh as ‘South Tibet'. India has recognised China's use of ‘salami-slicing' tactics to increase its territorial claims, which over time change the status quo in an area. But New Delhi has assessed that Beijing doesn't want to escalate tensions over Arunachal Pradesh and will likely limit its response to the latest Indian initiatives to lodging routine diplomatic protests and perhaps engaging in minor skirmishes along the boundary (like the stone-pelting incident between Indian and Chinese soldiers on the border with Chinese-occupied Kashmir in August 2017). Last year, a Chinese civilian road-building team entered Arunachal Pradesh and was forced to return after a minor faceoff with Indian army personnel. It appears that India has calculated that China wouldn't risk an active confrontation over Arunachal Pradesh, given the difficulty in navigating the mountainous terrain in the region and, more significantly, the priority China places on its interests in Taiwan and the South and East China seas.

China is testing India's vulnerabilities and political will. It has an interest in keeping New Delhi occupied along its borders, perhaps because it recognises India as a potential threat to realising ‘Chinese supremacy in Asia', as Mohan Malik has argued. Beijing's other motivation derives from using its claim over ‘South Tibet' to challenge Tibetan identity and curb Tibetan nationalism, which it believes is being fanned and enabled by India. Moreover, Arunachal Pradesh is strategically located at the confluence of four international borders—between India, China, Bhutan and Myanmar—and is prized territory both for India and for China.

Referring to Arunachal Pradesh as ‘India's pride' and hailing the patriotism of its 1.25 million residents, Modi's speech at the airport inauguration was directed more to his domestic constituency than to China. Modi's Hindu nationalist Bharatiya Janata Party attaches a lot of symbolic pride to the motherland and prioritises Indian assertion of sovereign control of border states such as Arunachal Pradesh. It blames the Congress Party and former prime minister Jawaharlal Nehru's indecisiveness and weakness for India's loss in the 1962 war against China, a defeat that remains a source of shame in the Hindu nationalist psyche. Modi's pitch for preserving India's sovereignty and territorial integrity as an election looms is thus mostly about declaring his strength to his party and the nation.

To New Delhi, India's northeast forms a gateway to Southeast Asia and is an integral part of Modi's ‘Act East' policy to develop closer links with the countries of the Indo-Pacific. India's northeastern states have historically been hotbeds of insurgent movements since independence, and infrastructure development and connectivity are fundamental to internal security and stability for the Indian nation. Most importantly for Modi, his infrastructure push in the northeast has so far resulted in unprecedented success for the Bharatiya Janata Party in state elections in a region far removed from the party's traditional ‘Hindi heartland' base.

Whether India is miscalculating Beijing's resolve on Arunachal Pradesh is hard to tell. India's most recent defence budget has been assessed as inadequate to address the country's growing strategic challenges, and both quantitatively and qualitatively, India is falling behind China in its defence spending. Analysts believe that India wouldn't be able to sustain a two-front land-border war with Pakistan in the west and China in the east, should such a situation arise. Nevertheless, India's emphasis on infrastructure and development in the northeast will help strengthen New Delhi's position.

The Sino-Indian land boundary dispute is likely to remain a source of low-level friction and antagonism between the two Asian giants. Negotiations and confidence-building measures have yielded little in over the past several years. China is likely to continue testing India's will and vulnerabilities and gain an advantage where it can. As we see with Modi's visit to Arunachal Pradesh, India is likely to continue to assert its sovereignty and protect its land borders while managing tensions in other areas of the relationship with China. The danger lies in either side miscalculating the other's motivation, resolve and patience.

Aakriti Bachhawat is a researcher with ASPI's defence and strategy program.

"India Builds Up Its Northeast"