In North Korea, It's Nukes Over Food 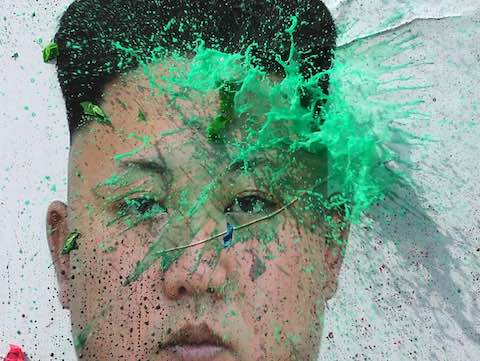 In North Korea, It's Nukes Over Food

Why does North Korea dedicate time and energy to its nuclear program while its people suffer? InsideGov explores potential motivations behind the actions of the Hermit Kingdom.

In Pyongyang, citizens are lucky if their side of the street gets electricity in the evening. North Korean families, in the capital and in rural areas, are fortunate if they manage to secure some white rice, freeing themselves from hunger pangs for the day. Dissenters are sent to prison camps where people are tortured and executed. This is all part of everyday life for the nearly 25 million people who live in the Hermit Kingdom.

But while its people go without the most basic day-to-day needs, the North Korean government continues to invest 25 percent of its GDP on military spending.

North Korea's recent actions suggest that nuclear aspirations supersede the immediate needs of its citizens. So far, North Korea has begun 2016 with significant posturing of its military might, which was met with increased economic sanctions. In the midst of its nuclear detonations and missile tests, North Korea offered to stop only if other nations agreed to end joint military exercises in the Korean Peninsula, which threaten North Korea's self-image of military and financial superiority. The U.S. declined the proposal -- the official U.S. policy goal is not only to put a stop to nuclear tests, but to force North Korea to relinquish its nuclear program.

Although North Korea's observed policy to choose its military over food might seem illogical, the rationale for this stance lies in its history. A look at North Korea's struggle for sovereignty provides context as to why it is the only country to engage in nuclear detonations in the 21st century, despite mounting international pressure. Nuclear weapons are a core pillar of the reclusive country's culture and protection against foreign interests. North Korea holds nuclear weapons as its trump card in international affairs.

For a country with a long history of suffering under imperialism, nuclear weapons are seen as the deterrent that ensures its independence. Kim Il Sung, the first president of the Democratic People's Republic of Korea, pursued the prestige of nuclear power and its potential to preserve the country's independence. North Korea's nuclear program began in the 1970s, when the Soviet Union provided a nuclear research reactor and training for scientists. In the context of the Cold War, countries hit by economic sanctions were partially stabilized by the Soviet bloc. After the fall of the Soviet Union, however, North Korea continued to pour its resources into nuclear technologies. Kim Jong Il, Il Sung's son and successor, turned these nuclear dreams into a reality, with the first successful detonation in 2006.

Under Kim Jong Un, North Korea's current supreme leader, the desire for nuclear weapons continues to take priority over the people's well-being. Although people are starving throughout the country, North Korea's National Defence Commission continues to boast about its capabilities:"If we push the buttons to annihilate the enemies even right now, all bases of provocations will be reduced to seas in flames and ashes in a moment." This sentiment does not only exist among the leadership. One North Korean told NK News,"Our nation may still be poor. But we can be one of the most powerful and influential nations in the sense of national defense."

This mindset takes its toll on the country as it alienates itself from groups that could give desperately needed aid. North Korea has been plagued by a persistent food deficit, and even during the widespread starvation of the 1990s, North Korea refused to give up its nuclear program. As seen below, the calorie deficit only continues to climb amid the modern weapon testing.

As sanctions continue, the isolated North Korean economy suffers. The country currently earns money through its tourism business, exporting labor abroad and various illicit activities, including the production of methamphetamines. Although it participates in limited trade with China and South Korea, international sanctions force the country into illegal partnerships and enterprises. In 2014, North Korea landed in hot water as a North Korean container ship that left Russia was intercepted in Panama and caught smuggling Cuban weapons.

Actions by the Hermit Kingdom suggest that sanctions do not influence its nuclear aspirations. Some academics argue that economic sanctions only hurt the poor and fail to limit the nation's nuclear capabilities. North Korea blatantly ignores restrictions on its nuclear program, conspicuously firing missiles after sanction announcements by the United Nations Security Council. North Korean Foreign Minister Ri Su Yong in April 2016 explained his country's mindset on how continued sanctions will be useless because"the more pressure you put on to something, the more emotionally you react to stand up against it." The detonations continue despite the loss of needed U.S. foreign aid. This bold move indicates that North Korea no longer wants the help the U.S. increasingly refuses to give.

Unsurprisingly, North Korea's nuclear dreams create a humanitarian nightmare for its citizens. However, these aspirations are rooted deep within the North Korean psyche. South Korean President Park Geun-hye recently predicted that"the North Korean government can no longer survive while pursuing nuclear weapons. Such moves will only lead to their collapse." As the food deficits grow and the aid disappears, North Korea experiences an existential crisis. It must decide on this ultimatum at some point -- nuclear weapons or its people.

"In North Korea, It's Nukes Over Food"