The Implications of the Xi-Ma Meeting for China-Taiwan Relations 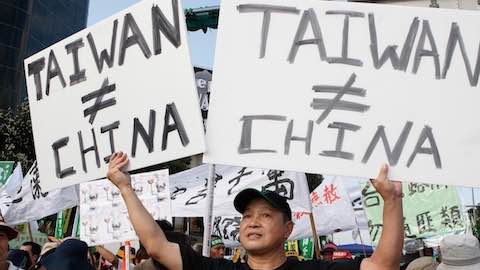 The Implications of the Xi-Ma Meeting for China-Taiwan Relations

Cross-Strait relations are merely one factor in the voting calculus of the Taiwanese electorate, and Beijing still does not formally recognise the existence of Taiwan.

On 7 November 2015, Chinese President Xi Jinping and Taiwanese President Ma Ying-jeou met in Singapore -- the first meeting between the leaders of the two countries since 1949. With the Taiwanese presidential and legislative elections scheduled for 16 January 2016 -- with every indication that President Ma's China-friendly Kuomintang (KMT) will lose to the pro-independence Democratic Progressive Party (DPP) led by Tsai Ing-wen -- three key perspectives have emerged regarding the implications of the meeting for the Taiwanese election and the future dynamic of cross-Strait relations.

Some observers argue that the meeting served as a distraction unlikely to alter the outcome of the election. No political breakthroughs were achieved and it did not fundamentally shift in China-Taiwan relations as the meeting did nothing to stop Taiwan's political isolation by Beijing. Rather, as Ma and the China-friendly KMT is already a lame duck in the elections, the Xi-Ma meting served as simply a photo opportunity for the CCP and KMT, and a farewell dinner for Ma. It remains that cross-Strait relations are merely one factor in the voting calculus of the Taiwanese electorate, and Beijing still does not formally recognise the existence of Taiwan.

Counter to this, it is argued by other commentators that the meeting was a symbolic political manoeuvre by Beijing to influence Taiwan's electoral results. That is, by holding the meeting President Xi signalled to the Taiwanese electorate that only the China-friendly KMT knows how to do business with China. Since the election of Ma in 2008 (and re-election in 2012), China has used preferential economic deals -- for instance the Economic Co-operation Framework Agreement and Pingtan special economic zone -- to normalise relations between the two countries, as well as stepping stones towards political integration and unification. This is significant as Taiwan's worsening economy needs China -- not only for its export-driven market to benefit from cuts in tariffs, but more importantly to end its political isolation as it currently unable to sign other bilateral agreements or participate in international organisations without offending China. Taiwan's annual GDP growth for 2015-2019 is predicted to be just 2 percent, and both the KMT and DPP are aware of the challenges of its weakening external demand and domestic market.

However, increasing dependence upon China for Taiwan's economic livelihood has led to the increased negative perception that the Kuomintang and President Ma has 'sold Taiwan to China'. Contrary to the argument that furthering economic interdependence creates interstate peace, cross-Strait relations is emblematic of Albert O. Hirschmann's argument: asymmetries in economically integrated dyads are likely to create incentives for the less dependent actor (China) to exploit its bargaining leverage to manipulate the more dependent actor (Taiwan). And in such a case, the cost for the Taiwanese is the future of its independent status, and the coercion of its political and national identity to suit the CCP's objective of 'one China'.

Indeed, the KMT's presidential candidate, Hung Hsiu-chu was dumped two months out from the election due to her unpopular campaign stances promoting closer ties to the mainland. Ms. Hung was the ideal candidate for Beijing -- she remarked that the KMT principle of"one China, different interpretations" should be revised to"one China, same interpretation", and she advocated for the need to reach a peace accord with China that is, unification as opposed to maintaining the status quo.

The changing approach of the CCP

This leads to the final perspective: the meeting was highly significant as it reflects a changing approach on behalf of the Chinese Communist Party (CCP) towards managing cross-Strait relations. For Beijing, there is now tacit recognition that it cannot control Taiwan's electorate, and cross-Strait cooperation must continue despite changes in political parties. Previously, Beijing has been hostile to the idea of meeting a leader of Taiwan -- whether KMT or DPP -- as this would imply recognition of Taiwan as an independent sovereign state. Although there were efforts to not infer legitimacy at the Xi-Ma meeting -- such as using 'mister' and not 'President' and saying 'leader of the Mainland' and 'leader of Taiwan' -- even the latter use of 'Taiwan' signifies a change in approach as previously China has always demanded the use of 'Chinese Taipei' so as not to legitimise the"renegade province" and"pro-independence forces of Taiwan".

This regional flashpoint is overwhelmingly influenced by second image concerns: the economic well-being and independent status of Taiwan's domestic political system, and the contest between the national identities of Taiwan and China. For China, the Taiwan issue remains one of national prestige and is linked to the legitimacy of the CCP regime in the context of its 'one China' policy and the 'one country, two systems' framework. Taiwan is so intimately tied to the political survival of the CCP regime, that it is believed by Chinese leaders that if they were to let Taiwan become independent, the nationalist public would overthrow the regime (See Susan China: Fragile Superpower, p. 187).

However, all the domestic indicators in Taiwan are trending against the CCP's objective of unification. In recent polls, 34.6 percent of Taiwanese desire to maintain the status quo and decide at a later date and 24.9 percent desire to maintain the status quo indefinitely, as compared to 7.4 who desire to move toward unification and 1.7 who want unification as soon as possible. In a related poll, an overwhelming 60 percent identify as solely Taiwanese, 33.7 as both Taiwanese and Chinese identity and only 3.5 percent as solely Chinese. As J. Michael Cole rightly argues"the underlying fundamentals -- the identity issues and incompatible political systems -- remain unchanged".

Significantly, political party preference for the DPP has risen to 29.7 percent, with the KMT lowering to 21.6 percent, and the majority 43.4 percent are swing voters. The tight contest in numbers and the large percentage of swing voters indicate the consolidation of Taiwan's democracy. In Beijing's calculations, such trends are significant particularly when placed alongside the US security guarantee for Taiwan, the 1979 Taiwan Relations Act. China cannot unilaterally use force on Taiwan to achieve its objective of unification without the involvement of the US. The CCP knows that time is not on their side, and given the increasing contrast in life and politics between Taiwan and the mainland, of course it is not in the Taiwanese electorates' interest to unify.

Xi's meeting with Ma signalled that the CCP is preparing for a new dynamic in cross-Strait relations post the 2016 election. Like Taiwan cannot afford to lose its economic investment in China, China cannot afford to lose its political investment in Taiwan. The idea of unifying Taiwan with the mainland is intimately tied to national prestige and regime survival, and Beijing has to now balance this with the need to work pragmatically with the incoming DPP government.

About The Author (Sheryn Lee):

Sheryn Lee is an Associate Lecturer in Security Studies at the Department of Policing, Intelligence and Counter Terrorism (PICT) at Macquarie University.

"The Implications of the Xi-Ma Meeting for China-Taiwan Relations"