I Gave Korea Too Much Credit 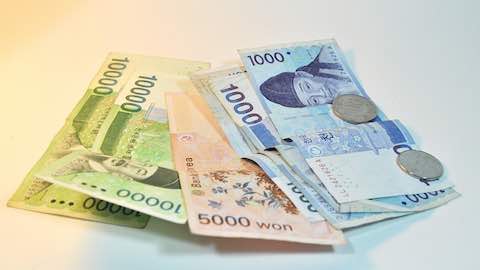 I Gave Korea Too Much Credit

Back in December, Taiwan's central bank didn't like my comparison between the movement in the Korean won in November and the lack of movement of the Taiwanese dollar.

Call me a bit suspicious. Something certainly seems to have kept the New Taiwan Dollar from appreciating (by too much) when Taiwan's current account surplus soared back above 15 percent of Taiwan's GDP in the second half of 2017.

I though am more worried that I gave Korea more credit than its behavior in the market really warrants than that I criticized Taiwan unfairly late last year.

The Koreans did let the won appreciate through 1090 won to the dollar late last year -- 1090 was the informal "ceiling" that they have maintained on the won ever since the 2014 fall in the yen and the 2015 depreciation of the yuan.

But it turns out the Koreans were intervening back in November and December to "smooth" this move -- the Bank of Korea's forward book jumped by about $4 billion in November and then rose a bit more in December.

And in early January Korea unambiguously intervened (and apparently intervened fairly heavily) when the Korean won rose (briefly) toward 1050. The intervention at 1050 was designed to be noticed -- and to signal to the market that Korea's tolerance for appreciation has limits.* It effectively established a new informal ceiling on the won. 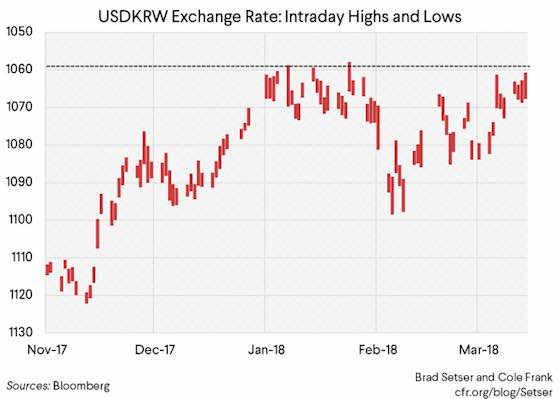 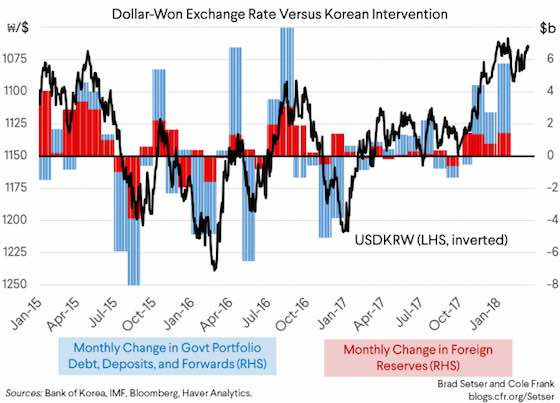 The choice to intervene before the won reached 1050 was not a complete surprise. 1050 was the level Korea generally defended through intervention from 2011 to 2015 (apart from a brief period in early 2014, when the Koreans allowed the won to rise toward 1000 before stepping in to block further appreciation). 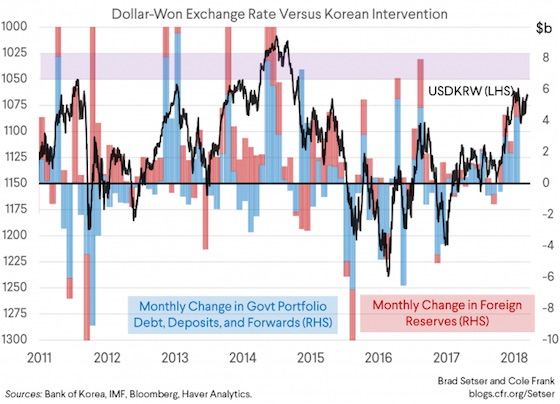 So while Korea deserves credit for allowing the won's trading range to be reset ever so slightly, they do not seem to have abandoned the idea of managing the won to keep it within an (evolving) undeclared target zone.

And if the Koreans are determined to keep the won below 1050, they are still -- in my view -- targeting a weak won: 1050 versus the dollar is roughly 10 percent weaker than the level of the won that was typical before the global crisis (Korea stepped back from the market in 05 and let the won appreciate at a time when some other Asian economies continued to resist; Korea effectively regressed after the global crisis).

And 1050 is still far too weak a won to drive a sustained adjustment in Korea's 6 percent of GDP current account surplus (higher oil prices will pull the surplus down, but better relations with China would pull it up -- the boycott of Chinese tourists over THAAD may have knocked a bit over half a percentage point off Korea's overall surplus).**

Korea's intervention is particularly galling because Korea clearly has relied on exports and a weak won to offset a tight fiscal policy and other domestic policies that restrain internal demand. Korea clearly has scope to, for example, raise its basic pension benefit.

The IMF puts Korea's general government fiscal surplus at 1.4 percent of GDP in 2017, and it is expected to remain around that level in 2018. The "expansionary" 2018 budget isn't really all that expansionary -- look at the fine print: revenues and expenditures are rising at the same pace.

Korea should be taking a bit of heat for its intervention in the current KORUS reset discussions. I for one would strongly support a U.S. effort to create a global norm that a country with a large (over 3 percent of GDP?) current account surplus shouldn't intervene in the market to block an appreciation of its currency. ***

* The BoP shows reserve purchases in January, and a rise in government purchases of long-term debt. This line item in the balance of payments has jumped during previous periods of intervention too (there is a line item in the government's budget for foreign currency market intervention as well). Korea also has explored a range of options for limiting the won's strength without overtly intervening (changing hedging ratios at the national pension service for example), as Korea both wants to limit the won's strength and avoid any formal designation for manipulation.

** Korea's tourism "exports" (meaning the spending of foreign tourists in Korea) fell by about $4 billion in 2017.

*** To my knowledge, the U.S. also never has really made Korea's overly tight fiscal policy a major bilateral issue. Germany was the focus of U.S. criticism on the fiscal side, not Korea -- when in practice their fiscal policies are quite similar. The IMF recently stepped up its criticism of Korea's overly tight fiscal stance. The U.S. Treasury should follow suit. Korea clearly has substantial scope, as the IMF notes, to support consumption growth through an increase in social spending.

"I Gave Korea Too Much Credit"