Human Rights and the 'ASEAN Way': Barriers to Progress 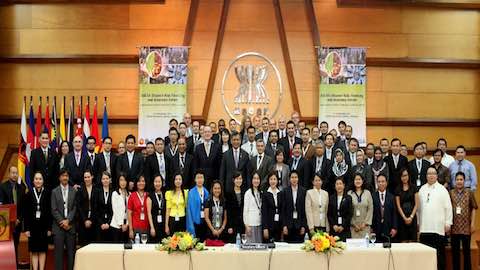 Little progress has been made towards the realisation of human rights amongst the ASEAN nations in Southeast Asia, and attempts will continue to perform poorly.

The Association of South-East Asian Nations (ASEAN) was founded on the 8th of August 1967 by the foreign leaders of Indonesia, Malaysia, the Philippines, Singapore, and Thailand, later expanded to include Cambodia, Vietnam, Myanmar/Burma, Lao PDR, and Brunei Darussalam (ASEAN 2016). ASEAN's initial purposes and aims were to promote economic cooperation and security in a time of colonial exodus and a fear of communist uprising (Aguirre and Pietropaoli 2012, 278). The development of these aims was later extended to include explicit social development, with a focus on the promotion of human rights through the last decade, borrowing heavily from similar initiatives by the United Nations (UN).

By the establishment of the ASEAN Charter in 2007, ASEAN member states were already engaged somewhat with a number of UN human rights treaties[1], although this was to widely varying degrees, with numerous caveats and generally poor performance (Davies 2014, 417-420). An explicit and centrally directed human rights project was officially begun by the association through the establishment of the ASEAN Charter, with specific references to human rights considerations in articles 1.7, 2.2i, and 14 (ASEAN 2015). The ASEAN Intergovernmental Commission on Human Rights (AICHR) was subsequently established in 2009 as a directing body to protect and promote human rights within ASEAN, tasked with developing the key ASEAN human rights document: The ASEAN Human Rights Declaration (ASEAN 2013).

The ASEAN Human Rights Declaration (AHRD) is an adaptation of the Universal Declaration of Human Rights (UDHR), declaring a commitment to"all the economic, social and cultural rights in the Universal Declaration" (ASEAN 2013, Article 10). Further explicit rights not included in the UDHR were also added, including"the right to a safe, clean and sustainable environment" (Article 28f) and the"right to development … so as to meet equitably the developmental and environmental needs of present and future generations" (Article 35). The AHRD has been criticised however by multiple civil society and international human rights organisations including Amnesty International (Amnesty International 2012), Human Rights Watch (Human Rights Watch 2012), and the UN High Commissioner for Human Rights (UN News Centre 2012). The primary criticisms of the AHRD are summed up by the United States' Department of State response which criticises"the use of the concept of 'cultural relativism' to suggest that rights in the UDHR do not apply everywhere; stipulating that domestic laws can trump universal human rights; incomplete descriptions of rights that are memorialized elsewhere; introducing novel limits to rights; and language that could be read to suggest that individual rights are subject to group veto" (The United States Department of State 2012).

It is difficult to quantify the successes, if any, of the AICHR and the AHRD in regards to an improved human rights environment within ASEAN states. Acts of social reform such as the introduction of pro-human rights legislation are one way to measure the progress, however this approach fails to account for adequate and all-inclusive enforcement measures, as well as actual compliance with such reforms. As signatories to at least one or more UN human rights treaties, all ASEAN states are subject to Universal Periodic Reviews (UPR's) which provide an authoritative analysis of the state of human rights within a nation state.

Myanmar/Burma, an ASEAN member state on the lower end of the developmental scale, continues to demonstrate little improvement in the development of human rights within its borders. The UN Human Rights Council (UNHRC) resolution on the Situation of human rights in Myanmar (UNHRC 2013) recognises preliminary advancements in human rights via slightly increased freedoms to political speech, commitments to open media reform, and the continued release of prisoners of conscience (item 3, 6). These improvements are rendered insignificant however by a barrage of concerns over persistent discrimination, violence, displacement and economic deprivation of ethnic and religious minorities (item 8). Coupled with this are concerns over continued armed conflict, desecration of places of worship, and sexual violence and torture in the Kachin region (item 10), as well as numerous other human rights violations. These include"arbitrary detention, forced displacement, land confiscations, rape and other forms of sexual violence, torture and cruel [sic], inhuman and degrading treatment, as well as violations of international humanitarian law" (item 4). By all accounts, the realisation of human rights in Myanmar/Burma has so far been a failed effort and egregious violations of human life and liberty continue to plague the nation.

At the opposite end of the developmental scale, the democratic republic of Singapore has managed to achieve overall improvements in human rights conditions, although only to an extent, since its independence in 1965. The last completed UPR in 2011[2] reports that"while there was still room for improvement, substantial progress has been made in the relatively short history of Singapore" (UNHRC 2011, Article I-A6). Despite improvements, Singapore rejects any further development of its human rights by refusing to abolish the death penalty, introduce legislation to criminalise"marital rape", repeal defamation laws which restrict freedom of expression and peaceful demonstration, and repeal legislation which criminalises homosexuality (Article II-97). Even though Singapore has been able to achieve a somewhat acceptable level of human rights in comparison to its ASEAN neighbours, it still fails to uphold global expectations in regards to human rights responsibilities (UNHRC 2015, Article I-B3).

This disparity in human rights progress between the arguably least-progressed Myanmar/Burma, and the arguably most-progressed Singapore, highlights the failure of initiatives such as the AICHR and the AHRD to produce"the full realization of human dignity and the attainment of a higher quality of life for [all] ASEAN peoples" (ASEAN 2013, 13). For the majority of lesser developed and more autocratic ASEAN member states such as Myanmar/Burma, Cambodia, Vietnam and Lao PDR, human rights abuses continue in spite of bureaucratic decrees and signed UN treaties. The reason for this lack of progress, I argue, goes further than the 'cultural relativism', incomplete descriptions, and limitations placed upon human rights within the AHRD itself. The lack of real progress towards a realisation of human rights within ASEAN can be attributed to a lack of fundamental coercive or intervention mechanisms which ensure states implement and abide by their human rights obligations. Compounded with this is a lack of homogeneity between state political configurations which make such an ambitious ASEAN project difficult to adequately implement within all member states.

ASEAN is often seen as an outlier in terms of multilateral cooperatives due to its consensus decision-making process and aversion to interference with member states' domestic actions. This lack of interference or coercion of individual members' domestic affairs has become colloquially known as the 'ASEAN Way' and has been criticised as fundamentally incompatible with initiatives such as the AICHR, the AHRD, and the ASEAN human rights project in general (Emmerson 2008; Aguirre and Pietropaoli 2012; Naldi and Magliveras 2014). As Aguirre and Pietropaoli argue,"[while] Indonesia, Thailand and the Philippines push for a more centralised ASEAN that includes human rights, the principle of non-interference empowers Cambodia, Laos, Vietnam and Myanmar to impede such institutional initiatives" (2012, 282). By continuing an approach of non-interference, ASEAN is conceding the future of its human rights project to the political will of each member states' government, some of which have proven to be unwilling or unable to engage with their human rights obligations.

During the ASEAN forty-year anniversary celebrations and launch of the Charter in 2007, Myanmar/Burma was in the midst of political protests, with reports of government directed human rights abuses including the use of automatic weapons against unarmed civilians (Cody 2007). Although a firm denouncement of such activities was eventually given on behalf of ASEAN (Embassy of the Republic of Singapore 2007), no intervention occurred and no subsequent action was taken to ensure such crimes are not committed again. Similarly in 2010, the AICHR refused to intervene or even investigate allegations of journalists having been massacred in the Philippines the previous year (Ginbar 2010, 516-518), failing in their mandate to"obtain information from ASEAN member states on the … protection of human rights" (ASEAN 2009, Article 4.10). For all of ASEAN's"commitment to the promotion and protection of human rights" (ASEAN 2013, 13), lack of intervention when such human rights atrocities occur and little more than a carefully worded suggestions that human rights abusers desist and"work towards a peaceful transition to democracy" (Embassy of the Republic of Singapore 2007), have led to states such as Myanmar/Burma to continue to ignore their human rights obligations with few repercussions.

Mathew Davies cautions against pressuring ASEAN to adopt European Union style hard compliance practices, arguing that ASEAN can address the issue of pariah states"without the radical overhaul of its political and procedural structures that are incompatible with its purpose" (2012, 16-17). In the four years since Davies' made this argument however, ASEAN has so far been unable to curb the human rights abuses occurring within many of its member states. Failure to ensure compliance, either through rhetorical coercion or interference mechanisms, has meant human rights initiatives in ASEAN such as the AICHR and AHRD have largely failed in their aims of achieving"human dignity and the attainment of a higher quality of life for [all] ASEAN peoples" (ASEAN 2013, 13). There remain legitimate questions as to the appropriateness of non-interference measures in the context of ongoing human rights abuses.

Underlying the failure of ASEAN human rights initiatives to bring about meaningful progress within the region, is a lack of homogeneity between member states' political configurations. Building on the work of Eric Neumayer (2005), Mathew Davies suggests the democratic status of individual countries have a strong impact on the extent with which human rights treaties are adopted and successfully ratified, while more autocratic states tend to reject such initiatives, resulting in deteriorating human rights environments (2014, 427-428). Taken in context with the difficulties that ASEAN has had in bringing its pariah states 'into the fold', I argue that ASEAN ought to focus on democratising efforts before continuing to attempt socialisation efforts on its more autocratic member states. By focussing their efforts on establishing stable, accountable and democratic governments within its outliers, efforts to establish a successful human rights agenda will prove far easier and more effective.

While it is important to give such ambitious projects adequate time to develop and grow, ASEAN has made little progress in the past decade towards the realisation of human rights. Other than bringing the rhetoric of human rights to the forefront of political discussions, little has been achieved with the AICHR or AHRD, and any progress that has been made has been done so solely in democratic member states such as Singapore, in the absence of ASEAN driven initiatives and instead through internal political developments. By continuing to allow some member states such as Myanmar/Burma to ignore its human rights obligations, ASEAN is earning its reputation as a 'talk-fest', unable to bring about real social change due to self-imposed rules of non-interference. While one may hope ASEAN is successful in bringing about significant and lasting change through its rhetorical coercion efforts, it is doubtful such human rights initiatives will be successful in their aims until ASEAN first addresses the underlying issue of political disparity between its democratic and non-democratic members.

The Association of South-East Asian Nations. 2016."History" Accessed May 2015. http://www.asean.org/asean/about-asean/history/

"Human Rights and the 'ASEAN Way': Barriers to Progress"