A Global Nuclear Winter: Avoiding the Unthinkable in India and Pakistan 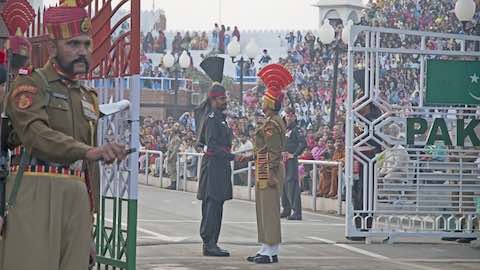 A Global Nuclear Winter: Avoiding the Unthinkable in India and Pakistan

As Donald Trump ascends to the White House, he's wading into the most dangerous conflict on the globe.

President-elect Donald Trump's off the cuff, chaotic approach to foreign policy had at least one thing going for it, even though it was more the feel of a blind pig rooting for acorns than a thought-out international initiative. In speaking with Pakistani Prime Minister Nawaz Sharif, the New York Times reported, Trump said he wanted “to address and find solutions” to Pakistan’s problems.

And what big problems they are.

Whether Trump understands exactly how dangerous the current tensions between Pakistan and India are, or if anything will come from the November 30 exchange between the two leaders, is anyone's guess. But it’s more than the Obama administration has done over the past eight years, in spite of the outgoing president’s 2008 election promise to address the on-going crisis in Kashmir.

Right now that troubled land is the single most dangerous spot on the globe.

India and Pakistan have fought three wars over the disputed province in the past six decades and came within a hair's breadth of a nuclear exchange in 1999. Both countries are on a crash program to produce nuclear weapons, and between them they have enough explosive power to not only kill more than 20 million of their own people, but also to devastate the world's ozone layer and throw the Northern Hemisphere into a nuclear winter -- with a catastrophic impact on agriculture worldwide.

According to studies done at Rutgers, the University of Colorado-Boulder, and the University of California-Los Angeles, if both countries detonated 100 Hiroshima-sized bombs, it would generate between 1 and 5 million tons of smoke. Within 10 days, that would drive temperatures in the Northern Hemisphere down to levels too cold for wheat production in much of Canada and Russia. The resulting 10 percent drop in rainfall -- especially in Asian locales that rely monsoons -- would exhaust worldwide food supplies, leading to the starvation of up to 100 million or more people.

Aside from the food crisis, a nuclear war in South Asia would destroy between 25 to 70 percent of the Northern Hemisphere's ozone layer, resulting in a massive increase in dangerous ultraviolent radiation.

Lest anyone think that the chances of such a war are slight, consider two recent developments.

One, a decision by Pakistan to deploy low-yield tactical or battlefield nuclear weapons and to give permission for local commanders to decide when to use them.

In an interview with the German newspaper Deutsche Welle, Gregory Koblentz of the Council on Foreign Relations warned that if a “commander of a forward-deployed nuclear armed unit finds himself in a 'use it or lose it' situation and about to be overrun, he might decided to launch his weapons.”

Pakistan's current defense minister, Muhammad Asif, told Geo TV, “If anyone steps on our soil and if anyone's designs are a threat to our security, we will not hesitate to use those [nuclear] weapons for our defense.”

Every few years the Pentagon “war games” a clash between Pakistan and India over Kashmir. Every game ends in a nuclear war.

The second dangerous development is the “Cold Start” strategy by India that would send Indian troops across the border to a depth of 30 kilometers in the advent of a terrorist attack like the 1999 Kargill incident in Kashmir, the 2001 terrorist attack on the Indian parliament, or the 2008 attack on Mumbai that killed 166 people.

Since the Indian army is more than twice the size of Pakistan's, there would be little that Pakistanis could do to stop such an invasion other than using battlefield nukes. India would then be faced with either accepting defeat or responding.

India doesn’t currently have any tactical nukes, only high yield strategic weapons -- many aimed at China -- whose primary value is to destroy cities. Hence a decision by a Pakistani commander to use a tactical warhead would almost surely lead to a strategic response by India, setting off a full-scale nuclear exchange and the nightmare that would follow in its wake.

With so much at stake, why is no one but a Twitter-addicted foreign policy apprentice saying anything? What happened to President Obama's follow through to his 2008 statement that the tensions over Kashmir “won't be easy” to solve, but that doing so “is important”?

A strategy of pulling India into an alliance against China was dreamed up during the administration of George W. Bush, but it was Obama's “Asia Pivot” that signed and sealed the deal. With it went a quid pro quo: If India would abandon its traditional neutrality, the Americans would turn a blind eye to Kashmir.

As a sweetener, the U.S. agreed to bypass the global nuclear Non-Proliferation Treaty and allow India to buy uranium on the world market, something New Delhi had been banned from doing since it detonated a nuclear bomb in 1974 using fuel it had cribbed from U.S.-supplied nuclear reactors. In any case, because neither India nor Pakistan is a party to the treaty, both should be barred from buying uranium. In India's case, the U.S. has waived that restriction.

The so-called 1-2-3 Agreement requires India to use any nuclear fuel it purchases in its civilian reactors, but frees it up to use its meager domestic supplies on its nuclear weapons program. India has since built two enormous nuclear production sites at Challakere and near Mysore, where, rumor has it, it is producing a hydrogen bomb. Both sites are off limits to international inspectors.

In 2008, when the Obama administration indicated it was interested in pursuing the 1-2-3 Agreement, then Pakistani Foreign minister Khurshid Kusuni warned that the deal would undermine the Non-Proliferation Treaty and lead to a nuclear arms race in Asia. That is exactly what has come to pass. The only countries currently adding to their nuclear arsenals are Pakistan, India, China, and North Korea.

While Pakistan is still frozen out of buying uranium on the world market, it has sufficient domestic supplies to fuel an accelerated program to raise its warhead production. Pakistan is estimated to have between 110 and 130 warheads already, and it’s projected to have developed 200 by 2020, surpassing the United Kingdom.

India has between 110 and 120 nuclear weapons. Both countries have short, medium, and long-range missiles, submarine ballistic missiles, and cruise missiles, plus nuclear-capable aircraft that can target each other's major urban areas.

A New Uprising in Kashmir

One problem in the current crisis is that both countries are essentially talking past one another.

Pakistan does have legitimate security concerns. It has fought and lost three wars with India over Kashmir since 1947, and it’s deeply paranoid about the size of the Indian army.

But India has been the victim of several major terrorist attacks that have Pakistan's fingerprints all over them. The 1999 Kargill invasion lasted a month and killed hundreds of soldiers on both sides. Reportedly the Pakistanis were considering arming their missiles with nuclear warheads until the Clinton administration convinced them to stand down.

Pakistan's military has long denied that it has any control over terrorist organizations based in Pakistan, but virtually all intelligence agencies agree that, with the exception of the country's home-grown Taliban, that is not the case. The Pakistani army certainly knew about a recent attack on an Indian army base in Kashmir that killed 19 soldiers.

In the past, India responded to such attacks with quiet counterattacks of its own, but this time around the right-wing nationalist government of Narendra Modi announced that the Indian military had crossed the border and killed more than 30 militants. It was the first time that India publicly acknowledged a cross-border assault.

Meanwhile the Indian press has whipped up a nationalist fervor that has seen sports events between the two countries cancelled and a ban on using Pakistani actors in Indian films. The Pakistani press has been no less jingoistic.

In the meantime, the situation in Kashmir has gone from bad to worse. Early in the summer Indian security forces killed Burhan Wani, a popular leader of the Kashmir independence movement. Since then the province has essentially been paralyzed, with schools closed and massive demonstrations. Thousands of residents have been arrested, close to 100 killed, and hundreds of demonstrators wounded and blinded by the widespread use of birdshot by Indian security forces.

Indian rule in Kashmir has been singularly brutal. Between 50,000 and 80,000 people have died over the past six decades, and thousands of others have been “disappeared” by security forces. While in the past the Pakistani army aided the infiltration of terrorist groups to attack the Indian army, this time around the uprising is homegrown. Kashmiris are simply tired of military rule and a law which gives Indian security forces essentially carte blanche to terrorize the population.

Called the Special Powers Act -- modeled after a British provision to suppress of Catholics in Northern Ireland and mirroring practices widely used by the Israelis in the Occupied Territories -- the law allows Indian authorities to arrest and imprison people without charge and gives immunity to Indian security forces.

As complex as the situation in Kashmir is, there are avenues to resolve it. A good start would be to suspend the Special Powers Act and send the Indian Army back to the barracks.

The crisis in Kashmir began when the Hindu ruler of the mostly Muslim region opted to join India when the countries were divided in 1947. At the time, the residents were promised that a UN-sponsored referendum would allow residents to choose India, Pakistan, or independence. That referendum has never been held.

Certainly the current situation cannot continue. Kashmir has almost 12 million people, and no army or security force -- even one as large as India's -- can maintain a permanent occupation if the residents don't want it. Instead of resorting to force, India should ratchet down its security forces and negotiate with Kashmiris for an interim increase in local autonomy.

But in the long run, the Kashmiris should have their referendum -- and both India and Pakistan will have to accept the results.

What the world cannot afford is for the current tensions to spiral down into a military confrontation that could easily get out of hand. The U.S., through its aid to Pakistan -- $860 million this year -- has some leverage, but it cannot play a role if its ultimate goal is an alliance to contain China, a close ally of Pakistan.

Neither country would survive a nuclear war, and neither country should be spending its money on an arms race. Almost 30 percent of Indians live below the poverty line, as do 22 percent of Pakistanis. The $51 billion Indian defense budget and the $7 billion Pakistan spends could be put to far better use.

"A Global Nuclear Winter: Avoiding the Unthinkable in India and Pakistan"