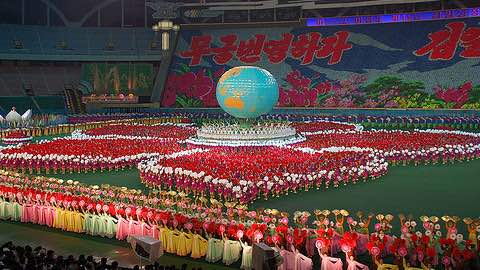 Governments, such as that of North Korea, based on terror against their own people, have a planned obsolescence. Pictured: the Arirang mass games. (Photo: Stephan / Flickr Commons )

At the National Interest, Jamie Metzl, who has served on the National Security Council, writes of North Korea:

&ellips those predicting its imminent collapse have continually been proven wrong. But today, the North Korean madness may well be nearing its endgame. I predict it will be gone within a decade.

Metzl writes that North Korea's continued existence is contingent upon exercising a reign of terror over its own people, its possession of nuclear weapons, and improving its economy. He doesn't actually spell out how subjugating its people will lead to its destruction except to note that

Economic reform … cannot work in North Korea without political reform. Greater access to information and freer movement of people and goods are essential underpinnings of a reforming economy. These same reforms would also undermine the legitimacy of the regime.

As for how its nuclear-weapons program will work against it, Metzl writes:

The further development of North Korea's nuclear weapons program, however, will ultimately put it at odds with China, its essential benefactor. &ellips China will rightly come to perceive the North's nuclear program as being designed primarily to limit Beijing's influence over Pyongyang. This will likely prove unacceptable to the Chinese, who will be forced to increase economic pressure on North Korea by reducing aid.

Meanwhile, the reforms required for a healthy economy would

&ellips force it to choose between shutting down economic reform to maintain totalitarian control or allowing the spark of political change to ignite that will, over time, become inextinguishable.

… With no logical path forward, the DPRK government will collapse under the weight of its own contradictions, as we may already be seeing in the recent wave of high-level executions.

No one wishes the chaos that accompanies a change in political systems on North Korea. We will leave it to someone with more knowledge of the region to make the case that said chaos is preferable to the status quo.