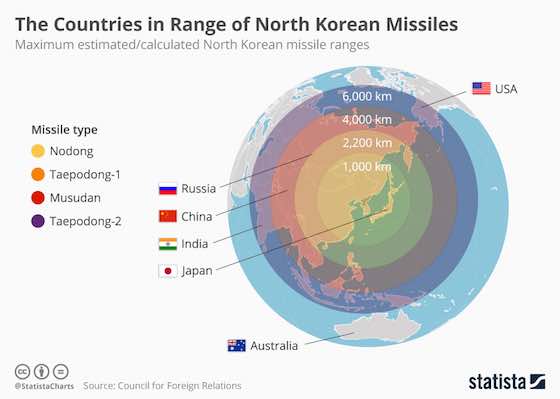 This chart shows the estimated ranges of North Korean missiles and the countries within that range.

In the latest of a series of missile tests by North Korea, leader Kim Jong-un has expressed his "great satisfaction" over a launch towards the Sea of Japan.

Described by state media as a 'surface-to-surface medium-to-long-range ballistic missile', the Pukguksong-2 is reported to have reached an altitude of about 550km (350 miles).

North Korea is hardly shy about it's nuclear ambitions, with each test leading to widespread condemnation and questions as to the country's current capability. As our infographic shows, the Council for Foreign Relations estimates the longest range missile, Taepodong-2, to have a reach of at least 6,000km meaning a strike on US soil would technically be possible.