Conflict in Kashmir: From the Ground Up 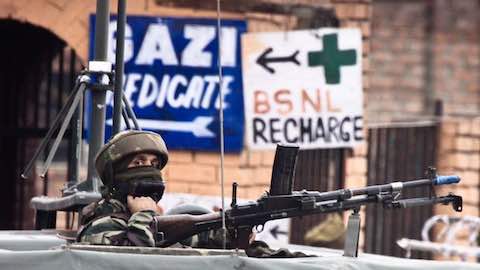 Conflict in Kashmir: From the Ground Up

As long as the world does not pay attention to the Kashmiri narrative, Kashmir will see many more periods of agitation, disruption and protest.

While the escalating tension between India and Pakistan is back in the spotlight, people in Kashmir are battling their own war to bring their narrative to the world.

The conflict in Kashmir is most often presented within the framework of Indo-Pakistani geopolitical, nuclear-enhanced enmity. In this traditional war narrative, the Kashmir Valley, nestled between the Himalayas and Pir Panjal mountain ranges, has been contested territory by India and Pakistan since independence and division of the Indian sub-continent in 1947. Part of the Maharajan Princely State of Jammu and Kashmir, in 1947 the Kashmir Valley became one of the three regions of the Indian state Jammu and Kashmir (which also comprises of Jammu and Ladakh).

However, a majority of the people in Kashmir have resisted this narrative from the outset. Within Kashmir, there has been an enduring uprising for azaadi, freedom, initially against the Maharaja in the 1930s and 1940s and then against the Indian rule since 1987. In the early 1990s, an intense battle was fought between militant groups, supported by a majority of the local population, and the Indian army. While some of the major militant groups, such as the Jammu and Kashmir Liberation Front, have since laid down their arms, a large proportion of the population in Kashmir still support the struggle for azaadi and regularly enter streets to protest against Indian presence. Since the start of the uprising in the late 1980s, more than 70,000 people have been killed and tens of thousands have been disappeared, tortured, and jailed.

In 2016 Kashmir has seen a new wave of agitation. These protests started as a response to the killing of a popular militant leader, Burhan Wani, on 8 July. Policies put in place by the Indian Government with the purpose of curbing dissent -- such as closing down of Internet and mobile phone networks, attacks on newspaper offices, pre-emptive arrests on"potential protesters" and well-known human rights activists -- have intensified the frustration.

Since the reinvigoration of agitation started in July, life in the Valley has been at a standstill. Due to curfews imposed by the Government and hartals (strikes) called by separatist groups, schools, shops, offices, and essential services such as medical clinics have been closed since. There have been reports that ambulances have been stopped and hospitals attacked by security forces. More than 150 Kashmiris have been killed and 17000 wounded in clashes between Indian security forces and protestors.

As a feminist scholar and activist I am interested in"[t]elling security narratives from the ground up and [&ellips] pay[ing] close attention to the impact of security policies, including war, on the everyday lives of people" (Wibben, 2011, p.11). Shifting the lens from the cross-border shelling to the everyday, we can see that insecurity affects all aspects of people's lives. Learning from the vast scholarship of feminists working in the field of IR, we see that these effects are gendered; women experience security differently from men.

When I conducted fieldwork in Kashmir a couple of years ago, I asked women about the impact of conflict on their lives. One activist retold her experience as a young woman in Kashmir:

[The] effect of conflict is also that your life completely takes a u-turn and somewhere you can't live like the [rest of the] world and you are in a sphere where you have only violations, threats, pain, misery, bloodshed. That's all you grew up with, that's all you have to deal with. I remember the effect of conflict for me as [&ellips] an individual, is that at the age of 13 I had every idea of what is difference between curfew and crackdown, but I had no idea what is synonym for picnic (quoted in Brännlund, 2015, p.165).

Young girls and boys growing up in Kashmir today will have similar experiences. Their schools have been closed for four months and when schools are opened, some of them have been burnt down. Since 10 September 2016, 33 schools have been set on fire. The perpetrators are still unknown and the arsonists have been criticised by all actors from all political camps. The Chief Minister of the state, Mehmooba Mufti, launched a programme a couple of weeks back to"empower the girl child" by awarding high achieving girls with scooters. This programme was based on the idea that parents would encourage their girls to study harder in order to accomplish this prize. However, the scheme has met with lukewarm enthusiasm in Kashmir; free scooters are not of much use if schools are closed or burning.

As winter is coming to the Kashmir Valley, life will soon be back to"business as usual." Exams are reported to have started in many schools amidst heavy security arrangements. Internet is being reconnected. In order to understand why the protests keep reoccurring and why the risk of death or blindness does not repel young men from entering the streets, we need to focus our attention beyond the headlines of Indo-Pakistani conflict. As long as the world does not pay attention to the Kashmiri narrative, Kashmir will see many more burning summers.

Dr. Emma Brännlund is Senior Lecturer in Politics and International Relations at the University of the West of England, Bristol.

"Conflict in Kashmir: From the Ground Up"