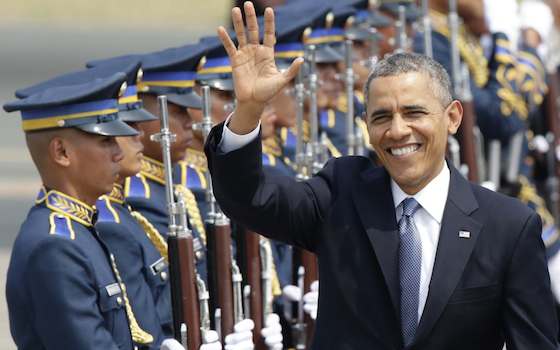 The first Obama administration was distinguished by eloquent promises and high expectations, especially in Norway where the jury of the Nobel Peace Prize awarded their annual distinction to even before he had settled down into the chair behind the presidential desk.

The record of those four years proved decidedly mixed, and the second Obama turn has been one of disappointments, danger, and amateurism -- the last-named quality in his second-term foreign policy team responsible for the first two judgments.

A third disappointment seems imminent. President Obama ruefully returned from Asia. The Obama "pivot" to Asia from the Middle East was always a mysterious initiative. Why? What could it mean other than a provocation or threat to China? Yet his trip excluded China. But while China has made trouble with neighboring states over rival claims to possession of certain islands and their seabed extensions, these are and should remain minor disputes subject to international arbitration or international legal adjudication -- the kind of solutions the United States should warmly recommend to all parties.

In the particular, and essentially trivial, case of the Sino-Japanese dispute over the Senkaku/Diaoyu isles, there was no cause for a brutal American warning to China that the U.S. considers the islands as falling under protection of the American-Japanese Security Treaty signed in the aftermath of the Second World War. A polite and indirect reference to the matter as one for peaceful settlement, of concern to the U.S. because of the existence of the security treaty, would have been tactful while conveying the same message. But tact seems a quality long abandoned in an America where officials communicate in obscenities.

The principal purpose of the Obama journey was to pressure reluctant Asian governments to join the . This is presented as a trade-promoting agreement of benefit to all, but as its terms have been kept totally secret from press and public it has become an increasing difficult sell -- even to Americans. Its real purpose, to put it succinctly, is permanently to install in international treaty law the supremacy of trade and corporate business interests over national political and social interests, specifically those that place limits on corporate freedom and unregulated trade.

According to informed Japanese sources, the negotiations, originally meant to end last year, have several times been postponed, mainly because of American resistance to any modification of its proposed terms.

For the Japanese, and the smaller Asian countries who are members of the negotiations, agricultural products are crucial subjects. These Japanese sources identify the American positions in Japanese as "demands" rather than translating them in softer expressions that convey the idea of exchange and compromise.

The latest reports on the discussion in Japan are that Japanese rice-growers, a politically vital lobby, refuse the American demands. As at the end of 2013, the treaty talks were already considered stalemated, it's suggested that Mr. Obama comes home without having rescued the trans-Pacific treaty. As its opponents in the have already announced that the president will not be given the "fast-track" powers he has requested -- to sign the agreement without preliminary Congressional or public debate of the treaty's terms, it seems that he should have stayed at home. The treaty, as they say, seems a dead parrot. Let us hope so.

The decision the president made at the beginning to balance his foreign policy by combining conservatives with liberals in his appointments has proven a bad one, although comprehensible in a new president whose previous personal experience was devoid of experience in international relations or foreign policy.

This has left him in a position where is widely regarded in both Europe and Asia -- not to speak of the -- as an indecisive figure in foreign policy matters, who has been led by his staff into issuing unfulfilled threats and warnings, and drawing unenforceable "red lines" for others to cross.

This has recently happened in the Middle East, in the case of the Syrian regime's alleged use of chemical weapons, and the matter of Israel's continuing deliberate territorial expansion into the occupied Palestinian territories and its settlement construction there. For all of the good will expended over many months by Secretary of State , the administration's nominal effort to produce a two-state solution to the Israel-Palestine conflict has been rebuffed by President with pathetic ease.

As American diplomats have conceded in the past (after retirement), the American role ever since these settlement negotiations began in the 1980s, the U.S. has performed the role of Israel's lawyer, its duty to humor the Palestinians (and the Europeans) while obtaining for Israel whatever the Israelis want.

Mr. Obama permitted the neo-conservatives in his (or ?) , together with the Congressionally-sponsored "democratization" NGOs dispatched to the former member-states of the Soviet Union, to become recruiting agents. The consequences were seen in Georgia in 2008, when (now ex-) President convinced himself that the United States would support his personal policy of recovering by war Georgia's lost lands. Similarly, this year in Ukraine, opponents of President were convinced that Russian President would accept (or be intimidated into tolerating) a pro- coup d'état.

He did not. It is another very serious reason Washington's European allies, as well as those in Asia, have lost their confidence in the Obama administration. It will be a struggle to regain it.