China and the Opportunity Costs of 9/11 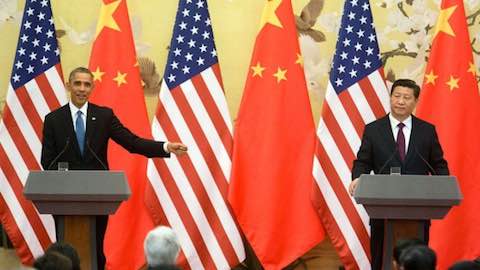 China and the Opportunity Costs of 9/11

The world's two major powers -- China and the United States -- lost a decade that could have been spent hashing out responses to climate change, the arms trade, and the global recession.

Both China and the United States face enormous challenges at home, common security problems, and an array of international crises that could really use the coordinated efforts of two superpowers. But the United States and China have about as much capacity to work together at the moment as Donald Trump and Jeb Bush.

The painful truth is that the United States is still trying to dig itself out from under the wreckage of the Bush years.

Our national security policy remains fixated on terrorism threats that only proliferated after the invasions of Afghanistan and Iraq. Our military budget, an enormous drain on the economy, is still up in the stratosphere. Even the greatest diplomatic success of the Obama administration -- the recent nuclear deal with Iran -- should have been concluded more than a decade ago, when Tehran was as freaked out as the United States was by the Sunni extremism of al-Qaeda.

One of the many opportunity costs of the Bush response to September 11 was Washington's reluctance to sit down with Beijing to work out a post-post-Cold War world that could accommodate China's economic rise without its bitter military aftertaste. The U.S. reliance on full-spectrum military dominance to deal with a full spectrum of problems sent a powerful message to China: bulk up or stay home. The upcoming summit will be the last chance to bolster the fragile partnership before the ritual China-bashing of the presidential election cycle once again strains the ties between Washington and Beijing.

Can President Obama make a real pivot to Asia that engages rather than contains China -- and, just as importantly, harnesses the power of the two global behemoths to change the world?

Duopoly: Not in the Cards

Gone are the days when big thinkers like Zbigniew Brzezinski , Niall Ferguson, and Fred Bergsten urged the United States and China to form a Group of Two to sort out the world's problems. It was a Brady Bunch proposal: Since mother and father had their hands full trying to manage their unruly children, why not join forces to bring order to an unharmonious world?

Four years ago, Richard Bush published his epitaph for the Brady Bunch idea:

It is fair to say…that people outside the United States paid far more attention to Brzezinski's and Bergsten's G-2 idea than did Americans themselves. The proposal sank like a stone in Washington but caused great ferment overseas, particularly among countries that would be unhappy if Beijing and Washington acted upon the idea.

Today, little remains of the mutual enthusiasm that Obama and Hu Jintao expressed in their first Strategic and Economic Dialogue in 2009. It's not quite as moribund as the"reset" with Russia, but that flirtation between China and the United States certainly didn't produce the marriage that Brzezinski and Bergsten imagined.

Indeed, this summer President Obama even began to consider a round of economic sanctions against China for a range of alleged hacks, including the theft of data from more than 20 million people at the U.S. government's Office of Personnel Management (OPM).

Mind you, the president was not overly vocal about the issue, and it looks like the Obama administration is reconsidering. The sanctions will likely target companies, not countries."That's because the Obama administration is wary of imposing sanctions for normal state-sponsored intelligence gathering tactics the U.S. government itself employs on an ongoing basis," writes Katie Bo Williams in The Hill.

That's putting it mildly. No less than James Clapper, the director of national intelligence, admitted in regard to the OPM theft:"If we had the opportunity to do the same thing, we’d probably do it."

Remember: This is an administration that taps into the cell phones of the leaders of allied countries, sucks up all manner of data from foreigners, and uses computer viruses to disrupt the infrastructure of U.S. adversaries. What is the National Security Agency but Hacker Central?

It turns out that the other major points of friction in the U.S.-China relationship are similarly complicated. Yes, China sent a couple of military ships up around the Arctic Circle recently, but they were in international waters. If the Obama administration complained, which it didn't, China would point to all those surveillance flights that the United States conducts near Chinese territory.

Or consider China's effort to claim as much of the South China Sea as it can get away with, much to the consternation of the other countries bordering that body of water. The United States is not engaged in any similar contest over territory, on land or sea, at least not explicitly. But we long ago turned the Pacific into an"American lake," and we've expended lives and money in the Middle East to, among other things, preserve access to the energy we need for our economy.

And then there's the whole currency manipulation"scandal."

Let's see if I've gotten this straight about China and its currency.

Over the summer, the largest and only remaining significant Communist country in the world allowed the yuan to fall in value in response to market forces. This move by a Communist country to allow global capitalism to have more impact on its currency received praise from none other than the International Monetary Fund.

But one of the most prominent billionaire capitalists in the United States, who has made at least some of his lucre from dealing with China, blasted his erstwhile trade partner for its financial manipulations. Republican presidential hopeful Donald Trump argued that China was"making it absolutely impossible for the United States to compete."

The ironies here are many. But even if we take Trump out of the equation -- and god knows, many people would like to see just that happen -- the United States can't really complain about what China is doing. The dollar floats, so the U.S. government can't intervene directly to manipulate its value relative to other currencies -- for instance, by lowering it to make U.S. exports cheaper. But it can do a number of indirect things. The Federal Reserve, for instance, has kept the interest rate low-- well, specifically the fed funds rate -- since 2009 to stimulate the economy.

China could conceivably complain about such"manipulations." But it knows that a sick U.S. economy would infect China immediately. So, from Beijing's point of view, the United States should"manipulate" as much as it can to help keep the global economy afloat.

Expectations are low for the upcoming U.S.-China summit.

The only commitment of any value that might come of the meeting would be a follow-up on climate change ahead of the big UN conference in December. There's plenty room for improvement. For instance, last year's accord between Obama and Xi only signaled only the intent of both sides: the United States to reduce carbon emissions 26-28 percent below 2005 levels by 2025 and China to up the non-fossil fuels in its energy use to 20 percent by 2030.

Of course, there's a good reason for the two sides stopping at"intent." An actual agreement would constitute a treaty, and then the Senate would have to weigh in. And what the two sides agreed to is not inconsequential, as The Washington Post notes:

The scale of construction for China to meet its goals is huge even by Chinese standards. It must add 800 to 1,000 gigawatts of nuclear, wind, solar, and other zero-emission generating capacity by 2030 -- more than all the coal-fired power plants that exist in China today and close to the total electricity generating capacity of the United States.

As for the United States:

There isn't much more to discuss on these proposals; both sides just have to implement the necessary domestic changes to meet these goals. They can also strategize on how to bring other major countries on board, as they did recently with Brazil.

Good as these initiatives are, they're just not good enough. Cue the authoritative voice of The New York Times:

It is increasingly evident that the policy actions by these countries and others will not be enough to stave off a rise in the atmospheric temperature of 2 degrees Celsius, or 3.6 degrees Fahrenheit. At that point, scientists say, the planet will be locked into a future of extreme storms, droughts, food and water shortages, and rising sea levels.

Put another way: Despite all the meetings, promises, and apocalyptic threats, global carbon emissions have risen from the Kyoto Protocol of 1997 until today -- from around 6.5 billion metric tons per year to nearly 10 billion. If both China and the United States had tackled this issue back in 2001, perhaps we wouldn't currently be in this pickle. Chalk that up as another opportunity cost (which might just cost us the planet).

Instead of haggling over currency, hacking, and sea-lanes, the two superpowers should be thinking big. Between them, the United States and China account for nearly one-third of the global economy, nearly one-quarter of the world's population, and more than two-fifths of the world's carbon emissions. What these two countries do by definition has an enormous global impact.

So, let's go back to that first imaginary press release to reconsider the challenges of the post-post-Cold War era and turn them into some bullet points:

This is the agenda interrupted by September 11. It's not too late for the United States and China to get together and lead the conversation back to these critical issues. But it's not going to happen by either cancelling the upcoming summit or treating it like just another obligatory photo op.

It's no time for a bunch of bickering children to control the agenda. The adults have to retake control, beginning with Barack and Jinping Brady.

"China and the Opportunity Costs of 9/11"