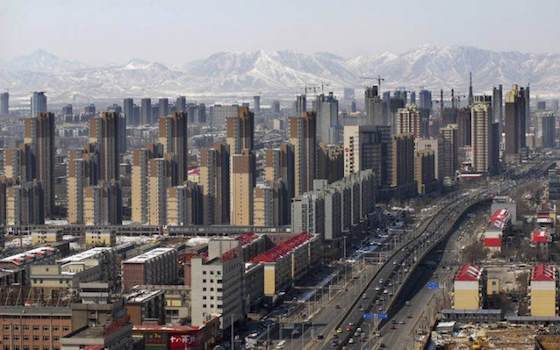 When Narendra Modi greeted Xi Jinping with the idea of "INCH (India and China) towards MILES (Millennium of Exceptional Synergy)" [1], the new age of "pragmatism"-based multi-polarity has taken another great step to replace the fading age of liberalism-based dominance by the United States.

In terms of military might, innovation capability, financial market leverage, natural resources endowment, and natural science progression, BRICS plus MIKT (Mexico, Indonesia, South Korea, Turkey) or CIVETS or "Next Eleven" altogether are no match with the USA. Yet, both analysts and ordinary people in the street can more or less sense that the U.S.-led unipolarity is under serious threat, especially from China.

Make no mistake, for example, China's weaponry is at least two decades behind the American. Take a look at the latest Zumwalt destroyer and the X-478 Unmanned Combat Air System on board of USS George H.W. Bush, then you know why no government can survive, including Beijing, Pyongyang and Tehran, if it dares to have direct combat against the United States' offshore forces, not to mention the onshore arsenals. Nevertheless, it seems Washington D.C. has been floundering hard to maintain the American supremacy in the international arena.

The primary reason, perhaps, is that the éclat of the American Creed has been losing its effulgence. Reaganomics (and Thatcherism) politically brought down the Soviet Union and economically presented decades-long prosperity to the post-WWII baby boomers. Laissez-faire, socio-political freedoms, individualism, democracy, human rights and rule of law all were inspiring ideals to peoples worldwide, thus reconfiguring many states in the Third World, and even fostering the recent Arab Spring and revolt in Ukraine. It seemed liberal universalism [2] was about to succeed. In his 1992 bestseller book, Stanford scholar Francis Fukuyama pronounced that we had come to the "End of History" as Western liberal democracy was the ultimate system for humanity [3].

Liberalism did not stop then and there, Ayn Rand's objectivism which emphasizes almost unrestricted individual rights and liberty pushed individualism beyond limits, amplifying and accelerating the expansion of egoism. The outcomes, unfortunately, were Wall Street wolves, Asian financial crisis 1997, subprime mortgage crisis 2008, rising 1%-vs-99% wealth gap and European PIIGS government debt turmoil. In his latest long essay "America in Decay", Fukuyama admits that the Madisonian check-and-balance system has been torn by judicialization, polarization and interest groups' explosion, and notably the "rise of vetocracy" is threatening the health of American democracy [4].

In 2012, the Free Exchange forum at The Economist highlighted the bottleneck problem of democracy in India: "Business leaders in India frequently suffer China envy. If only India's political system was like China's, they reason, the government could push through much needed reforms and the economy would take off (and stay airborne)" [5]. China's challenge to the United States' supreme status is not based on its overblown military strength, nor the multi-billion U.S. Dollar reserve, but on its doctrine of "pragmatism" as stipulated in the so-called China Model. No one is definitely sure what this model is, but as a matter of fact this model has been working well for more than 30 years. Rooted from Deng Xiaoping's "black cat or white cat, the one that can catch rat is a good cat" and "crossing the river by touching the stone at the riverbed", pragmatism in policy making refers to a decision logic that "benefits" and "trial and error" overriding ideological or moral principles. The China Model thereon includes a capitalistic socialist economic system and a rotational political succession mechanism [6].

With this unique model, China has transformed itself to become a gigantic market for raw materials, consumer products and technologies amid lots of defects. Simultaneously, the dynamics of this transformation have also battered and fluttered the prevailing world order through China's increasing share of world trade (China trade amounted to US$3.87 tn vs USA's $3.82 tn in 2013 [7]), foreign direct investment outflow (mainland China plus Hong Kong up from 5.65% of world total in 2008 to 13.65% 2013, vs USA's 23.98% [8]), and trade finance by Chinese Yuan (renminbi surpassed euro in Oct 2013 as the second major settlement currency behind US dollar [9] ). When more nations can reduce their economic reliance on the United States, quite many of them bid defiance to both the political and moral pressures from Washington. Germany since Kohl, France under the leadership of Mitterrand and Chirac, Saudi Arabia since King Abdullah [10], Turkey since Erdogan, Thailand since Thaksin, Venezuela since Chavez, and Brazil since Lula are discernible examples. After the formal establishment of the BRIC's New Development Bank on July 15, 2014, the American liberal policy's influence through IMF and World Bank will further be eroded [11].

For sure, none of them are looking to China for world leadership as Beijing is neither militarily mighty nor morally appealing. However, being pragmatic, these countries can look to China for lucrative trading in exchange for wealth and job opportunities for their own citizens, thus strengthening their own national powers on all fronts. One by one, each of them attempts to build its own sphere of influence to serve its own national interest respectively. Here is the source of the forthcoming multi-bloc international relations and the threat of China to the United States. Being infiltrated by pragmatic considerations, fewer national leaders are following the White House's conductor baton. "Minority rights? Press freedom? Please take care of your own Michael Brown case in Ferguson. Do not come to annoy me as I am in discussion with my customers from Shanghai, please."

The Four Little Dragons (Singapore, Hong Kong, Taiwan and South Korea), based on certain similar Chinese working ethics, succeeded in the 1980s-90s and are still affluent. However, the "New Society" economy in the Philippines under U.S.-backed Macros' leadership did not generate fruitful result. Japan, a faithful follower of the U.S., was for once shiny but then fell into "Lost Decades". Boris Yeltsin adopted Milton Friedman's "Shock Therapy" -- liberalization and privatization -- for Russia but it ended up with miseries and chaos. In India, the Cambridge/Oxford-educated Manmohan Singh's liberal economic policy also did not function well during his 2004-14 premiership (even though it was much better than the ISI [Import-substitution Industrialization] policy implemented in the 1950s) [12]. Unlike all his predecessors, Modi rose to power not through the Congress or PM's cabinet in New Delhi, but from his solid 13-year grassroots governance in Gujarat. Probably without any knowledge of econometrics or vector autoregression, Modi still managed to serve his region with jobs and weal. This background is very similar to the rise of Xi Jinping who worked in Hebei, Fujian and Zhejiang for almost 20 years before getting a promotion to Beijing. It is therefore not surprising to see them both think in the same frequency of pragmatic logic waves.

Putting the border dispute aside pragmatically, Modi developed a personal touch with Xi [13] and signed three Gujarat-specific pacts and then twelve investment and cultural international agreements. This synergy has upgraded the application of pragmatism to the level that commercial benefits override territorial or historical enmities. The warmongers will eventually realize that both India and China have no second choice other than being pragmatic [14], given their huge population sizes -- 13 and 12 billion respectively -- and limited natural resources.

In the due course of enriching their peoples, the Indian and other developing countries leaders cannot avert mistakes but they would probably opt for a pragmatic approach: "Chinese pragmatism or American liberalism, the one that can yield opulence is the good 'ism'". The other side of the coin means that the only way for the United States to revive its sole superpower status is to put liberalism in good practice at home so as to show the world it really works. And the best time to begin, perhaps, is Sep 30 -- the 'US-India Partnership Day' just passed by the Senate.

James Burnham's "policy of democratic world order" (1947) and Alexander Wendt's argument that a world state is inevitable (2003) are examples of liberal universalism. There are many relevant articles in Louiza Odysseos and Fabio Petito (eds.) (2007), The International Political Thought of Carl Schmitt: Terror, Liberal War and the Crisis of Global Order, London and New York: Routledge.

For more info, readers may read

Sinhua, Aseema (2011), An institutional perspective on the post-liberalization state in India, in Akhil Gupta and K. Sivramakrishnan (eds.), The State in India After liberalization: Interdisciplinary Perspectives, London and New York: Routledge.

Keith K C Hui is a Chinese University of Hong Kong graduate, a Fellow of The Association of Chartered Certified Accountants (UK), and the author of Helmsman Ruler: China's Pragmatic Version of Plato's Ideal Political Succession System in The Republic, Singapore: Trafford, 2013.