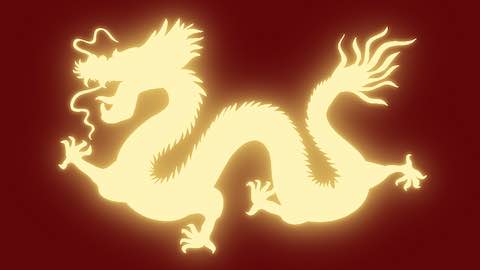 The proposed cut in the central government's fiscal deficit is a mistake:

- China saves too much. National savings are still close to 45 percent of GDP. 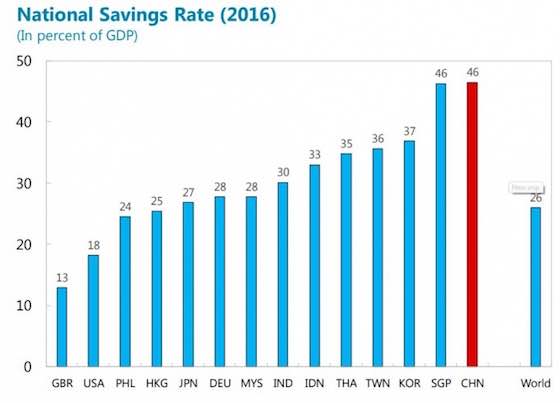 - Expanding the scope of social insurance is the key to bringing China's high levels of savings down. And it would be much easier to expand social insurance if the central government, not the provinces, took responsibility for the provision of basic pensions and unemployment insurance. That's what the IMF, among others, has found.

- A bigger on-budget fiscal deficit would actually make it easier to slow the growth of credit. Less credit -- meaning less credit to Chinese firms (often state-owned or state-backed firms to be sure) -- risks slowing growth. Historically, such growth slowdowns have led the government to ease off. But it seems that direct fiscal spending provides a more powerful impetus to growth than the expansion of credit. China could, in effect, get more with less if it relied less on bank credit and inefficient investment and more on central government borrowing and social spending to support its economy.

That's why China should be raising central government borrowing even as local governments cut back. The augmented fiscal deficit is something like 12 percent of China's GDP -- any needed reduction in the overall fiscal impulse could easily have come from squeezing off balance sheet borrowing by local governments.

This all matters for the world too.

So long as China saves so much, keeping demand growth up is a problem -- and in the past, the solution to that problem has either been exporting China's spare savings to the world and drawing on global demand, (through large trade surpluses) or putting those savings to work in China through credit easing. My view here hasn't changed from 2016: "Before the financial crisis, excess East Asian savings stoked the U.S. housing bubble and helped to create internal imbalances in the United States and the eurozone, which were sustained only through the accumulation of toxic risks in the U.S. and European banking systems. Since the crisis, they have contributed to bubbles and bad debts within the region, notably in China."

While a larger United States fiscal deficit adds to the world's balance of payments imbalances, a larger fiscal deficit in China helps to limit them -- without its fiscal deficit, China's external surplus would likely be much bigger. The 2016 fiscal stimulus (done largely off-budget), in my view, is a big reason why China's current account surplus is now well under 3 percent of its GDP.* 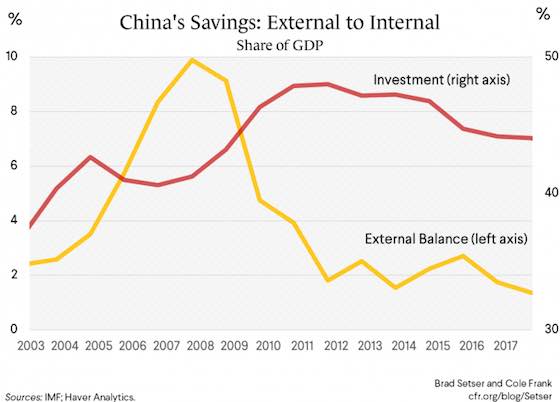 But set aside external imbalances for a moment. I worry more about them than some others.

China wants to reign in domestic credit and limit financial excesses. It also wants to scale back off-balance sheet borrowing by local government investment vehicles/locally owned state firms (China and the IMF haven't been able to agree if lending to such firms constitutes a hidden fiscal deficit or just another loan to China's indebted state backed firms, but that's mostly a question of accounting).

Fair enough -- there unquestionably have been significant excesses.

Yet such policies also restrain domestic demand growth, slamming on the brakes without having offsetting policies in place to help support demand would lead the economy to stall.

China can limit the risks posed by its desire to scale back off-budget credit to local firms through a larger on-budget fiscal deficit. That would keep up demand -- and reduce risk that restraints on financial sector leverage will be reversed should the economy slow more than expected. Not all parts of the economy need to "delever" (relative to GDP that is, not absolutely) simultaneously.

Moreover, constraining the central government's fiscal deficit -- particularly at a time when the government is cutting taxes -- inevitably will require squeezing public spending. That will make it hard to provide the kind of expansion of the social safety net -- higher minimum pensions, more spending on public health, more transfers to low wage workers -- that China needs to bring down its high household savings.** 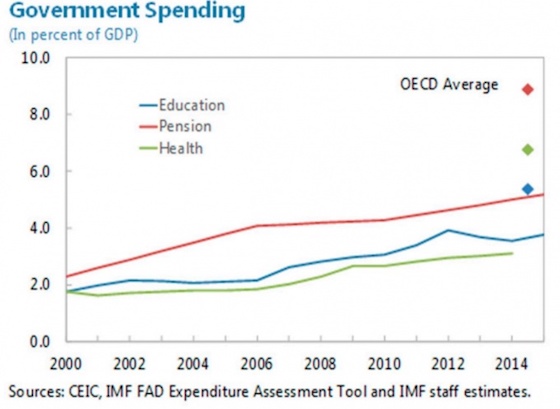 China in my view made a mistake after the global crisis by relying so heavily on off-budget stimulus (credit, local government investment vehicles, etc.).

It should have done more on budget, from the center. The Ministry of Finance's de facto 3 percent of GDP cap on the central government's fiscal deficit in effect just pushed borrowing on to the balance sheet of entities less able to handle it.

It risks continuing that mistake now.

*/ China's true current account surplus is between half a point and a full point of GDP higher than officially reported, as its tourism deficit is clearly overstated. See Anna Wong.

**/ The IMF's selected issues paper (basically, staff research) on China was particularly good this year. The underlying research is providing the basis for a series of stand-alone papers as well (links to the relevant papers are above). Many of thees papers strongly make the case that China would benefit from rebalancing government support for the economy away from credit and public investment toward stronger provision of social services, and that China would benefit from a much more progressive system of taxation. The IMF is still a bit too inclined to advocate fiscal consolidation in some current account surplus countries for my taste -- and a bit too timid in its call for fiscal expansion in Korea. But it now is a strong voice for expanding social spending in several East Asian surplus economies.