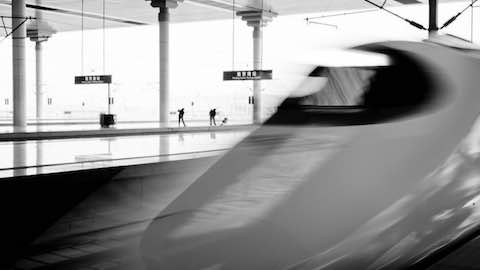 by Kerry Brown and Shan Huang

China largely operates on self-interest. Even so, understanding China's approach as pragmatic, not altruistic, those working with China can come out with economic gains.

The world has worked out some time ago that China largely operates on the basis of self-interest.

The language about win-win has been interpreted amongst some as simply meaning that China ends up winning twice. Even so, the right mode of engagement can mean that those who understand that China is not acting on altruism but with a core of pragmatism, too, can come out with some gains from their relations with the People's Republic.

Such a case might include that of the recently opened high-speed train constructed by two Chinese state companies between the East African powers of Ethiopia and Djibouti. This is the first such case of Chinese involvement along these lines in the continent, and the first high-speed rail of any kind, built by anyone, in this region. What does this signal for China's future engagement?

Firstly, there is a global context here. China has been interested in rolling out its infrastructural expertise in general and its high-speed rail construction in particular for a number of years. It was precisely to use and share some of its knowledge in these areas that it set up the Asian Infrastructure Investment Bank in 2014. China, in the era of reform and opening up, has learnt plenty about how to develop its rail, road, airline, and other transport links. It has an interest in making sure these exist in its main emerging markets and potential supplying countries.

Secondly, for high-speed rail in particular, having built the most extensive network of these domestically over a shorter period than any other nation on earth, China feels it has particular expertise. It has, for instance, bid to supply high-speed facilities to Indonesia. It has expressed interest in investing in the planned high-speed trains in the UK. It has competed against Japan and France in trying to secure contracts elsewhere in the world as well. Having an example like that of the Ethiopian-Djibouti project to showcase the viability of its technology to the rest of the world is invaluable. It would seek to use this as a stepping stone to getting access into more promising or strategically important markets like those of Europe or in China's own backyard, elsewhere in Asia.

Thirdly, there are very sound economic and political-strategic reasons for why China would want to be involved in the Ethiopian-Djibouti project. Africa is a wide market for its goods, which will become increasingly important, as well as a place it can source raw materials and energy from. China's hunger for these, while a little abated in the era when its growth rate is slowing, is still strong. Having as diverse a range of supply sources as possible suits it. In Africa, however, its greatest problem is the very poor standard of infrastructure. A train link like this can only help in improving things. In this case, too, it is particularly useful in view of the fact that for the first time ever, China has constructed a naval base in Djibouti along its coast, a first of its kind for the People's Republic. The base has great strategic importance, as it covers an area through which ample vessels carrying Chinese energy from the Middle East pass.

Finally, there is the political angle. China has been a long-term actor in African affairs, but a distracted one. It has been present there since the Maoist period, involved initially in aid projects, before lessening its attention from 1978 when its focus shifted towards developed countries like the US, through which it learned much about cutting-edge technology and the construction of a developed economy. In the last decade, however, it has been attending to Africa far more. A mere look at the increase in its trade and investment there illustrates this.

Since 2009, China was Africa’s largest trade partner six years in a row. The accumulative total amount of the contract projects which Chinese enterprises signed in the region exceeds $52 billion. The total length of railways is over 3,000 kilometers, with 1,424 kilometers under construction. Besides railways, China has also invested in over 3,530 kilometers of highway, 34 power plants, 9 ports, 14 airports, 11 bridges, and 8 high-capacity stadiums. Since 2000, China’s investment in Africa increased 60 times, standing at over $30 billion now, with trade value increasing 20 times compared to 2000. In 2014, the value of trade between China and Africa was over $220 billion. China’s total amount of investment to Africa in 2015 was nearly $40 billion. The figures paint a clear picture.

In December 2015, Chinese President Xi Jinping announced that China was going to promote ‘The Ten Cooperation Plan’ in three years at the China-Africa Cooperation Forum (FOCAC) held in South Africa that year, and also confirmed $60 billion resources to make sure these plans could be implemented. Till now, however, the Chinese government is yet to give an official concrete statement about how to distribute or implement the allocated funds.

Does all this mean that China is radically upgrading its links into Africa and looking for an even more committed relationship? The answer is not a straightforward one. Since the heady days of the mid-2000s, when it really seemed to have a scatter-gun, energetic approach towards Africa, it has learned that there are many pitfalls in the complex and often divisive politics of this continent. It has become more cautious and much more strategic. So, the current move of building East Africa's first high-speed rail network is one that makes sense to Beijing, because it plays to its strategic needs and strengths, and moreover, it figures in a bigger picture where China is not just able to see benefit for itself, but also express its support for partners in Africa while controlling the risks of being overexposed in the region.

China, however, seems to overlook that, economically and politically, Africa could be a bottomless pit. It would be interesting to see, therefore, what it seeks to do next. If it engages in more high-speed rail projects in the continent, then it would need to do so on the clear understanding that these are never likely to be viable economic or commercial entities. There are currently only two high-speed railways in the world which pay for their way -- the link between Tokyo and Kyoto in Japan and that between Beijing and Shanghai. Everywhere else, such networks tend to lose money. This means that if China commits, it will be so because of the constellation of reasons outlined above, which shall, in that event, not be a new story, but an old one -- China acting first and foremost for self-interest and others then managing to fit into the situation of conduciveness.