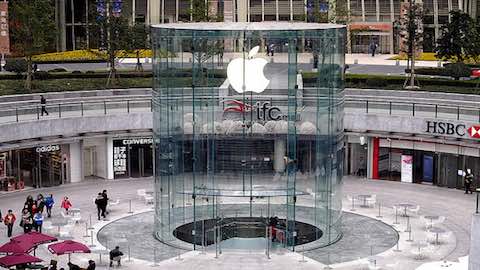 By Fergus Ryan (The Strategist)

China's ambition to shape the future of the internet received a helpful boost, courtesy of the CEOs and top executives from the most influential companies on the planet, including Apple, Google and Facebook.

The US tech execs were among the delegates at the highly choreographed World Internet Conference, held in the city of Wuzhen in East China. Their attendance was a coup for Beijing's censors and won new legitimacy for their vision for the internet in which nation-states are able to wall themselves off from the rest of the world.

Beijing's zealous censors pounced, ordering the gags to be scrubbed from websites inside the 'great firewall' -- a fact we know thanks to a leaked circular published online by the US-based China Digital Times.

It's a fitting example of how Beijing's vision for the internet works in practice. While dissenting voices are censored, those that parrot the official line are amplified.

'The theme of this conference -- developing a digital economy for openness and shared benefits -- is a vision we at Apple share', Apple's Tim Cook said in remarks that were gleefully reprinted by Chinese state media. 'We are proud to have worked alongside many of our partners in China to help build a community that will join a common future in cyberspace.'

One headline on the fiercely nationalistic rag the Global Times claimed, with its customary chutzpah, 'Chinese Net remains open'. Another read, 'Consensus grows at Internet conference'.

Ironically, Apple removed hundreds of VPN apps from its download store in China at the government's request earlier this year. But for the tech giant, the moral calculation is easy when you look at the numbers. Speaking at the conference on Sunday, Cook said that Apple's App Store has earned nearly $17 billion for 1.8 million Chinese developers, who together account for about one-quarter of all developers' revenue through the store.

The Chinese market is proving to be alluring in new ways. As new technological fields like AI open up, the country seems at a unique advantage due to its huge population and a lack of concern about privacy.

It's enough to have even Google -- which famously retreated from the mainland Chinese market in 2010 on a matter of principle after it declined to censor its results -- outlining big plans to return to the market in a big way.

Alibaba executive chairman Jack Ma offered a blunt warning to the Western tech companies that have been agonising over how to engage with the Chinese market. 'People complain too much', he said at Wuzhen. '[Foreign companies] are determined to come. Follow the rules and laws and if you’re unhappy, leave', he added. 'This is not a market [where] you can come and go.'

Beijing has been making slow, steady gains in promoting its vision for the internet, which it has dubbed 'cyber sovereignty' in multiple forums. The strategy came into sharper focus at Wuzhen after the government unveiled its plans for a 'Digital Silk Road' that would run along the Belt and Road Initiative. The developing world, in particular, is being wired by China, making the prospect of a global 'Splinternet' a worrying possibility.

'China stands ready to develop new rules and systems of internet governance to serve all parties and counteract current imbalances', Wang Huning, a member of China's top decision-making body, the Politburo Standing Committee, told an audience at Wuzhen that included Cook and Ma.

While Wang didn't shy away from spruiking the government's concept of 'cyber sovereignty', it was the delegates to the PLA's Cyberspace Strategy Forum -- held in Beijing a week before the Wuzhen conference, and to an entirely local audience -- who put it more bluntly.

At that event, China Institute of Contemporary International Relations' Zhao Chen spoke about the spirit of 'deepening comprehensive governance, widening the road to an Internet powerhouse', and quoted Xi Jinping:

Currently, the rivalry among major powers in cybersecurity is not just one for technology, but rivalry for ideology, for the power of discourse ... We should safeguard our cyberspace sovereignty with righteousness, and make our voice loud and clear.

For the Chinese government, cybersecurity isn't only about hackers and cybercrime; it's about 'information security' -- code for ensuring liberal foreign ideas like democracy and the separation of powers don't gain a foothold inside the middle kingdom.

As with each previous Wuzhen conference, the internet blocks on Facebook, Google, YouTube and Twitter were removed for the benefit of the international visitors. Perhaps next year Beijing will be confident enough to leave them blocked and let its visitors experience what 'cyber sovereignty' means in practice.