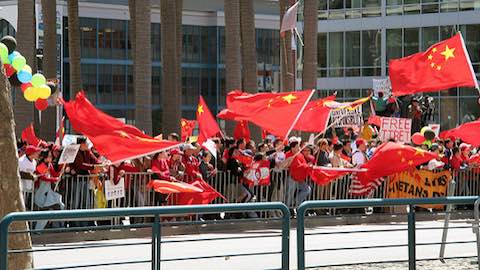 At the top of the list of issues is the increasing assertive and at times coercive behavior of China.

We're in Tokyo for the fifth Quadrilateral Plus track-two dialogue, along with think tanks from Japan, India and the US. With the Quad starting to get a bit of momentum behind it, it's time to start thinking about what it might actually do -- rather than just talk about -- to address the big security issues of our time. This article is adapted from a paper we presented at the meeting.

At the top of the list of issues for the Quad -- indeed one of the major reasons the Quad cohered in the first place -- is the increasing assertive and at times coercive behaviour of China. China's militarisation of the South China Sea, an increasingly threatening tone towards Taiwan, border incursions in the Himalayas, and the frequent and often aggressive incursions around the Senkaku Islands are the most obvious practical demonstrations of its emboldened foreign and strategic policy. None of those are helpful in positioning China as a non-revisionist power.

To be fair, when we take a more global view of China's actions, it doesn't look as threatening as it does nearer to home -- but it isn't a particularly reassuring picture either. Chinese money talks loudly in the developing world, and it's used as leverage to get Chinese companies into new places, often as a consequence of soft loans made to governments with little power to resist the funds on offer. Looking at the South Pacific, for example, there are many instances of loans being given for economically marginal ventures, with the locals getting only modest flow-on benefits.

Much of China's global activity is positive. China is currently the biggest contributor of troops to UN peacekeeping missions, for example, and it would be a stretch to say that selfish motives underlie the current rate of effort. Similarly, the Chinese navy has worked with multinational maritime forces to help police against piracy. China does some things because it wants to be seen as a major power, with the ability to contribute to global efforts, rather than with narrow self-interest as the motivation.

So the aim of any interactions with China should be to encourage behaviour that helps build common goods, while providing disincentives for the more aggressive and unhelpful applications of Chinese power. In recent years China has been very successful in achieving its geopolitical goals, but we should remember that it isn't an invulnerable colossus.

Weaknesses in elements of China's power provide potential points of leverage for the Quad countries, especially if we can take a consistent and strategic approach. It's fashionable in the Western press to talk about how dependent we are on China. That's especially true in Australia, where the narrative now is that our 26 years of uninterrupted growth are the result of economic ties with China. But that cuts both ways: China needs the rest of the world at least as much as we need it -- and may become more dependent as some of its internal structural problems become more obvious. It might be productive for Quad members to think through ways of making those interdependencies clearer. It would certainly help balance a lot of unthinking rhetoric about having no choice but to placate China.

But there's also a downside risk to the rest of us in Chinese weaknesses. The Communist Party (CCP) has quite skilfully used a combination of appealing to Chinese nationalism and providing economic benefits to strengthen its hold on the country. For most of the past 20 years, the economic element took precedence. Nationalism could be stirred up when it suited and, while an imprecise implement, it probably suited the CCP quite well to have a backdrop of angry nationalists when asserting its position on contested spaces.

But vehement nationalism is a deeply unattractive thing, especially when it's accompanied by anger at perceived social injustices, and it can lead to disaster if a nation is swept along by it. So the question becomes what happens when there's a confluence of factors that conspires to release the shackles on Chinese nationalism. An economic downturn, especially one that impacted heavily on China's relatively newly wealthy middle class, could cause the CCP to try to turn attention away from internal issues towards external ones.

So far China's assertiveness and unilateral ways have been calculated to not cross the threshold where open conflict is a predictable outcome. China has effectively annexed the South China Sea by never doing anything precipitous, for which a robust military response would be appropriate. Similarly, Beijing backed off the angry rhetoric regarding the Senkaku/Diaoyu islands after President Barack Obama said that the US--Japan Treaty provisions extended over the islands. They didn't, however, stop the low-level incursions, and in fact have ramped up their frequency -- always slowly enough that a big pushback isn't likely. That calibration depends on Chinese authorities being able to manage and control outbursts of nationalism. Growing public confidence in China's strength, combined with a desire by the PLA to show what it can do could result in the failure of managed calibration.

It's now clear that President Xi Jinping sees himself continuing to preside over China for many years to come. His status seems assured, and he has overseen a new level of monitoring and control of public discourse to ensure that his effective takeover is unchallenged. Party control seems solid enough for now, but it might be that the centralisation of power in the person of Xi turns out to be overreach in the party, or overreach in the party's management of China. It certainly makes it hard for Xi to be associated with failures, and a geopolitical setback might be hard to manage, especially if the economy slows further.

The Quad countries have many strengths as well, and our collective military and economic clout is more than a match for China. We think the Quad can collectively put a bit of a brake on China's geopolitical ambitions, but there are dangers here. Humiliating China plays into its nationalist narrative, and runs the risk of the CCP acting in response to internal agitation. That shouldn't stop us from acting in our interests, but we need to factor the risk of inadvertently sparking unrest in China into the calculus of what we might do.

Andrew Davies is tagging Michael Shoebridge in as the Director of the Defence and Strategy Program at ASPI.