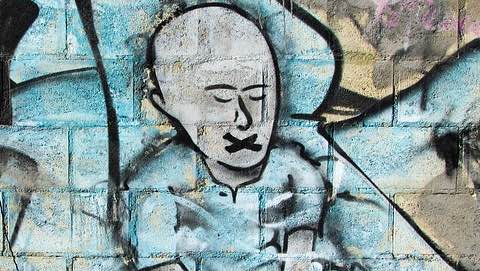 To watch the Chinese censorship apparatus working in overdrive has been to see China reach its reduction ad absurdum in real time.

So sensitive are the proposed changes to the Chinese constitution -- which clear the way for President Xi Jinping to stay in power indefinitely -- that even arguments made by social media users in favour of the change were caught in the censor's net. 'I'm not sure if Germany counts as a democracy,' hazarded one Weibo user in a tepidly supportive post, 'but their presidency doesn't have any term limit.' The post, like thousands of others, was promptly whacked by Chinese censors.

While some offered opinions, others sprang into action, prompting more action from the censors. Almost immediately after the constitutional announcement, queries for the word 'emigrate' spiked on Chinese search engine Baidu. Soon after, the word was blocked online altogether.

'Emigrate' was only the 10th most censored search term on Chinese micro-blogging site Weibo. Outranking it were words one might expect -- 'constitution', 'amend the constitution', 'Xi Jinping' and 'ascend to the throne'. But others, more obscure, were also blocked as censors scrambled to stamp out the memes and coded language that Weibo users were creating on the fly in an attempt to circumvent the censorship.

Some of the top words to face the chopping block included 'Winnie' from 'Winnie the Pooh', who has, since 2013, been used to mock Xi's appearance. With it banned, censors then had to block references to 'Disney China', the company that owns the rights to the famously cuddly bear.

Chinese netizens then began to plumb the depths of both low and high culture to find new allusions -- using screenshots as varied as those from popular TV shows featuring characters calling for the death of the emperor to direct references to historical figures like Yuan Shikai, the first president of the Republic of China who proclaimed himself emperor.

As the news spread, the list of banned words blew out to a ridiculous degree, to include 'I disagree', 'boarding a plane' and the title of George Orwell's dystopian classic, Animal farm. Even the Roman alphabet letter 'N' was blocked.

It would be funny if it weren't so serious. Behind the gallows humour is growing despair. Those Chinese internet users looking for ways to emigrate surely know in their bones what Jerome Cohen, a Chinese legal expert and New York University professor, wrote in a blog post: 'The Chinese Communist Party's proposed abolition of China's presidential term limit means that it has forgotten one of the main lessons of Mao’s long despotism. [The two-term limit's] abolition signals the likelihood of another long period of severe repression.' He goes on: 'It will enable [Xi] to move more boldly and increases the risk of his acting arbitrarily and perhaps mistakenly in international relations.'

Aside from the geopolitical risks, it pays to consider this censorship spree as an object lesson in how arbitrary the Chinese Communist Party's restrictions on free speech can be, and how readily the party can overreach.

Readers may well shrug their shoulders and ask what this has to do with them. So let's be clear: China's censorship apparatus is no longer just a boutique concern of China-watchers; it affects all of us.

During the Bennelong by-election in December last year, political parties courted the crucial Chinese--Australian vote in the electorate through the Chinese messaging app WeChat. The discussions that took place on that app between candidates, elected representatives and their constituents were therefore subject to CCP censorship by default.

What if some of those constituents wanted to ask a sensitive question about China's foreign policy in the South China Sea? What if they wanted to discuss one of the 'forbidden three Ts' -- Tiananmen, Taiwan or Tibet? Would those messages have reached the candidates? How would we know?

We can be sure that views approved by the CCP will be allowed to flourish. While liberal voices have been systematically silenced online, illiberal voices have taken full flight, drowning out discussions domestically and taking aim at foreign targets on the other side of the Great Firewall.

Australian Twitter users got a taste of this treatment in 2016 when thousands of trolls attacked Australian Olympic swimmer Mack Horton and his supporters after Horton called his Chinese rival Sun Yang a 'drug cheat'.

One by one, big Western companies like Apple, Daimler, Marriot International and Yum Brands are being cowed by hordes of nationalistic trolls for the crime of crossing patriotic red lines. The more abject the apologies, the more the trolls feel empowered and able to move on to bigger targets.

To what extent are our own companies, politicians, journalists and academics already self-censoring for fear of offending Xi's China?