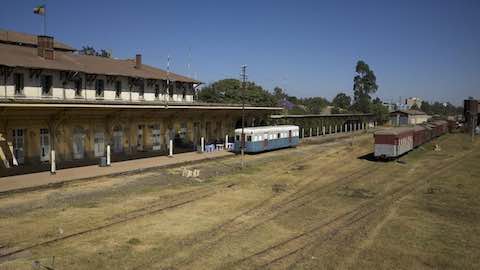 As China inches closer to becoming a global power, the rest of the world, especially critical voices within the US, may need to ask themselves: are we ready?

The China-funded Addis Ababa--Djibouti Railway, which became operational in October 2016, is Africa's first modern electrified railway. It links Ethiopia's capital city with the port of Djibouti, providing landlocked Ethiopia with railroad access to a vital maritime zone. More than 95% of Ethiopia's trade passes through Djibouti. The multi-year, multi-billion dollar project extends a length of 752.7 km (466 miles). Travelling at 120 km/h, the new service cuts the journey time down from three days by road to about 12 hours. Chinese controllers, technicians and station masters are contracted to manage the services for the next five years, during which the Chinese will train their Ethiopian counterparts who will take charge afterwards. The project is reminiscent of the Tanzam Railway or TAZARA that China helped build in the 1970s linking the port of Dar-es-Salaam in Tanzania with the town of Kapiri Mposhi in Zambia's Central Province. China's GDP was lower than many African countries then; today, China is the world's second largest economy with global reach.

What does this new Chinese penetration into the African continent mean?

Chinese-African cooperation is increasingly becoming multifaceted. For instance, China's First Lady, Peng Liyuan, and her Malawian counterpart, Gertrude Mutharika, both known for their devotion to charity, agreed recently to work together to fight against AIDS in Africa. At the onset, the new railway, serving as a catalyst for Ethiopia's and East Africa's economic development, will express how China's engagement with Africa has grown deeper and wider. Ethiopia's economy has been one of the fastest growing in the world recently, lifting millions out of poverty. The Ethiopian government is trying to transform its agriculture-based economy into a modern, industrialized one, with particular focus on infrastructure and other public projects. Thus, this new railway is significant in Ethiopia's economic transformation. With the new rail line, there is bound to be an increase in trade between Ethiopia and the Middle East, Europe and Central Asia. Djibouti will obviously benefit from the projected trade boom. As a main entry point into Africa for many countries in the Middle East, Djibouti's position in regional and global trade will be further enhanced. There is now a greater chance of conducting business in high value imports like fruits, vegetables and flowers, which makes trade between Africa and the Middle East ever more alluring.

Secondly, the railway demonstrates not just China's financial and construction prowess but also its huge potential and appetite for bilateral cooperation. It was built between 2011 and 2016 by the state-owned China Railway Group and the China Civil Engineering Construction Corporation. Financing for the new line was provided by the Exim Bank of China, the China Development Bank, and the Industrial and Commercial Bank of China. A total of US$4 billion were invested into the railway. Chinese investment accounted for 70 percent of the total cost. For the experienced Chinese contractors, the construction of a railway with a designed speed of 120 km per hour is not difficult, but it takes nothing short of a great feat to complete it with no compromise on quality and timeliness given the inadequacy of construction materials and technical staff in Ethiopia. China is also building major rail projects in several other African countries including Nigeria, Angola, DR Congo, Kenya and Tanzania. Given China's railway construction expertise and financial prowess, it is no more a mere dream that someday China will help build a trans-continental railway from Djibouti's coast all the way to the Atlantic Ocean.

Thirdly, the railway represents China's new approach to Africa, one that is more sensitive to local needs. China has been criticized for not generating local employment by bringing in its own workers to projects in Africa, and for paying little attention to the environment, labor and safety issues. For the Chinese firms, the lack of local technical personnel with adequate railway technology knowledge had been a serious hurdle in constructing the Addis Ababa-Djibouti Railway. For example, it took 20,000 workers to complete a specific section of the railway and it would have been impossible to have seen the posts filled entirely by the Chinese. To tackle the challenge, the Chinese firms involved made the training of local technical workers a routine part of their operations in Ethiopia. Thereon, more than 15,000 local workers went through various training programs, thus ensuring enough manpower for railway construction and a talent reserve for future management of railway operations. Environmentally, the Addis Ababa--Djibouti Railway is an electrified, eco-friendly system contributing to the region's green development.

There are many other instances of this new Chinese approach. Chinese companies such as Huawei are partnering with African businesses to accelerate Africa's digital economy. Chinese automotive manufacturer, BYD Motors, has been selected as the preferred bidder to supply a fleet of electric battery-operated buses to South Africa's Cape Town, which will be the first city in Africa to use electric buses for public transport. These clean-running buses will not just help provide its residents with a more sustainable public transport system but also assist the country in achieving its environmental objectives.

Finally, despite the imminent benefits of this railway for Africa, it is unlikely to lower the naysayers' anxieties about China's global ambitions. The question is not whether China's rise poses a threat; rather, it is whether others, especially the United States, is prepared. China wants to be able to protect its interests and investments throughout sub-Saharan Africa. At present, work is underway to construct China's first overseas military base in Djibouti, in close proximity to a key US national security asset: a 4,000-strong American military presence that includes the largest US drone installation outside Afghanistan.

Some observers tend to view US-China relations as a zero-sum game. In a March 2015 letter, US Representatives Dana Rohrabacher (R-Ca.) and Chris Smith (R-N.J.) wrote to Secretary of Defense Ash Carter, Secretary of State John Kerry and National Security Adviser Susan Rice to warn them of 'China's unprecedented investment in Djibouti and worrisome behavior by the country's longtime leader.' The two Congressmen warned that Chinese investment in infrastructure could be 'parlayed into investment in strategic influence.' 'We are worried that our own strategic interests around the Horn of Africa, specifically our critical counterterrorism operations, will be impacted by China's growing strategic influence in the region,' wrote Rohrabacher and Smith. It has perhaps not occurred to them how the two powers can work together in Africa in areas such as combating terrorism and piracy and promoting development and peace.

Regardless of its detractors, China's engagement with African countries, meanwhile, is likely to deepen as China's 'One Belt, One Road' initiative takes off. Alongside, China's investment in the developed world, notably including the US, is reaching a record high. As China inches closer to becoming a global power, the rest of the world, especially critical voices within the US, may need to ask themselves: are we ready?

Zhiqun Zhu is professor of political science and international relations at Bucknell University, USA. He has been following Chinese investment in Africa and other parts of the world.