Can a Green Asia Lead the World? 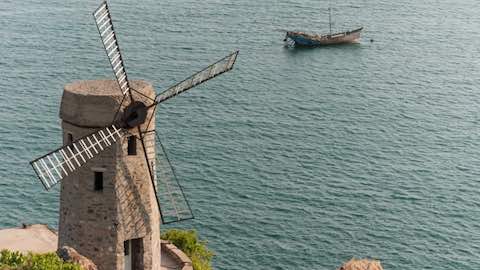 Can a Green Asia Lead the World?

If the countries of Northeast Asia can shrink their carbon footprint and still grow their economies, they can literally save the world.

China is worried about climate change. The largest emitter of carbon in the world, producing nearly twice as much as the number two United States, is looking at a future of flooded coastal cities, creeping deserts in the north, and water shortages throughout the country.

On the eve of the huge climate change meeting in Paris last week that brought together leaders of 150 countries, along with 40,000 representatives from every nation in the world, the Chinese government issued a report on the likely impact of global warming on the country. The third such report in a decade, each one increasingly dire, it reflects a rapidly dawning realization that China's remarkable economic growth comes with an enormous global price tag. It also explains China's willingness to offer, in advance of the Paris meeting, to up the share of renewables in its overall energy portfolio to 20 percent by 2030.

China is not the only country in East Asia to eye the global thermometer and begin to sweat. Of the top ten emitters of carbon dioxide in the world, three are close neighbors: China, Japan, and South Korea. China, at least, can argue that its per capita emissions are rather low. South Korea can't make that argument: its per capita carbon emissions are nearly twice that of the European Union.

South Korean President Park Geun-Hye has made a very public commitment to shrink her country's carbon footprint. Last June, she pledged that South Korea will cut its emissions by 37 percent by 2030. This pledge is accompanied by various initiatives: making Jeju Island carbon-neutral, investing in clean energy alternatives, and linking the country's new cap-and-trade system to a global carbon market

Strangely, even as the South Korean government has accelerated its Green programs, the number of South Koreans who view global warming as a serious threat has actually fallen in recent years. According to a recent Pew Research survey, only 48 percent of the population are very worried about climate change, down from 68 percent five years ago. At the same time, nine out of 10 South Koreans believe that climate change will directly affect their lives at some point.

Maybe all this government action has lulled South Korean citizens into thinking that they don't have to worry so much because the world is finally coming together to deal with the problem. That, unfortunately, would be a serious miscalculation.

The challenge facing the world's leaders is to keep global temperatures from rising an additional two degrees centigrade over the pre-industrial mark. In very concrete terms, the globe had, as of 2011, about a billion metric tons of carbon it could spew into the atmosphere before reaching the tipping point. After reaching that point, the community of nations would have to maintain a Green equilibrium to stay at the two-degree mark, emitting no more carbon than it could somehow capture.

Today, after emitting another 100 million tons of emissions, the world's global carbon account stands at about 900 million tons. It drops even more if the calculations are off or if other factors are included such as the ongoing deforestation that offsets emissions (trees being a very effective way of capture carbon dioxide).

But here's the critical issue: despite all the calls for reductions, the world continues to increase its carbon emissions. Even if all the current pledges are fulfilled, the increases won't stop for another 10-15 years. And even if the world manages to stop short of the two-degree increase -- which, frankly, seems virtually impossible at this point -- climate change will still set into motion irreversible changes.

The threat of nuclear war promised a more immediate cataclysm (and still does, for there are still more than 15,000 nuclear weapons, many of them still on hair-trigger alert). The effects of climate change, meanwhile, are much more gradual. The world won't end from one day to the next. Rather, life will simply get harder and harder for more and more people. For every degree of temperature increase, for instance, ocean waters will rise about seven feet. For a country like South Korea, that's a lot of lost coastline.

Climate change will also mean more frequent and more violent weather events (storms, tsunamis, hurricanes). It will sharpen conflicts over diminishing resources (water, arable land). It will pit countries that can afford Green development against those still trapped by yesterday's technologies. Even the Green Development Fund, capitalized at $100 billion and headquartered in Songdo, will not be able to bridge that gap without a much larger influx of capital.

Many are hoping that some new technology will magically appear to make the problem go away. Bill Gates, for instance, has just assembled his billionaire friends to launch a Breakthrough Energy Coalition that will push new clean energy technologies. Maybe one of Coalition's futuristic ideas -- like solar paint that generates electricity on the outside of houses -- will prove miraculous.

But here's a more sobering possibility. Climate change is just the most urgent example of our resource profligacy. It's not just that we're burning up fossil fuels at an unsustainable rate. We're also exhausting the soil, overfishing the seas, destroying our forests, and drinking up our potable water. We've made such a mess of things on Earth that some entrepreneurs, like Elon Musk, are dreaming of somehow starting over again on Mars.

Perhaps it's not too late to save our planet. China must radically reduce its overall carbon footprint while somehow continuing to grow economically. South Korea has to figure out a way to cut its per capita carbon emissions. And North Korea has to discover how to catch up to its neighbors without relying on fossil fuels. If Asia, with its very different levels of economic development, can go Green in a big way, then there's hope yet for the world.

"Can a Green Asia Lead the World?"