Can South Korea Save the Global Economy? 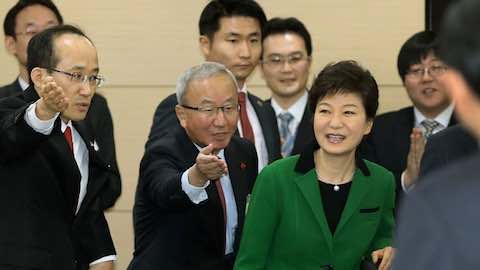 Can South Korea Save the Global Economy?

The South Korean economy has hit the skids. Could this be a moment for a radical rethink?

Over the last five years, South Koreans have worried that their economy has slipped deeper into stagnation. Growth rates have hovered between 2 and 3 percent. Consumer spending is weak, and household debt has risen to record levels. Because global demand has fallen, the world is not buying Korean exports as eagerly as before.

This is not just an economic crisis. It is an identity crisis.

South Korea has long been identified with rapid economic growth and a corresponding ppali ppali spirit. Koreans can take a lot of pride in their country's amazing trajectory from the devastation of the Korean War to a place among the top industrialized nations of the world in the space of a single generation.

It's no surprise, then, that Korean politicians are searching for a magic formula that can restore economic health to the country in the same way that those small bottles you can buy at a Korean store promise to"boost vitality."

But such a cure may not exist. It's very possible that Korea's miraculous growth rates are a thing of the past, never to return. It's not about a flaw in the Korean economy or in Korean thinking. Rather, developed countries all over the world -- Japan, Europe, the United States -- have settled into a similar malaise.

According to economist Robert Gordon, the era of dramatic growth is over. For the United States, that era ended in 1970 after an unprecedented series of inventions.

"Manual outdoor jobs were replaced by work in air-conditioned environments, housework was increasingly performed by electric appliances, darkness was replaced by light, and isolation was replaced not just by travel, but also by color television images bringing the world into the living room," writes Gordon in his new book, The Rise and Fall of American Growth."The economic revolution of 1870 to 1970 was unique in human history, unrepeatable because so many of its achievements could happen only once."

His argument consists of two parts. First, a set of unique inventions made it possible for an extraordinary increase in human productivity. People could make more things, make them faster, and put them in the hands of more people. Farmers became factory workers. Industrial workers became white-collar workers. Office workers became virtual employees. Most importantly, these developments can only happen once.

Second, these innovations not only spurred dramatic economic growth, they pulled huge numbers of people out of poverty and created an enormous middle class. We continue to innovate. But new technologies are more likely to create jobless growth, for instance through automation.

This slowdown in economic growth has obviously affected countries at a different pace. The United States began to see signs of stagnation beginning around 1972. Then Western Europe began to slow down. Japan wouldn't hit the wall until 1990.

Now it's South Korea's turn. Perhaps there is some consolation for Koreans to realize that their economic woes are part of a larger pattern. But it doesn't make the unemployment, stagnant wages, or rising debt any easier to swallow.

So, that's the diagnosis. What's the prescription?

South Korea could hold on tight until global demand picks up. This might happen, temporarily, if the United States continues to power through its recovery and as consumers in countries like India begin to buy more. The removal of trade barriers might also help. But this would be only a temporary improvement since dramatic growth is a thing of the past for most countries, even China. The challenge of climate change also represents a serious limit to how much and how fast the global economy can grow.

Another option would be for South Korea to prove Gordon wrong and develop a brand new technology that revolutionizes productivity -- artificial intelligence, perhaps, or some new-fangled drug. But the growth associated with such innovation would not likely create a lot of jobs or spread its benefits widely, at least judging by what has happened over the last decade or so in Silicon Valley.

The third option is the more radical one. South Korea can reinvent itself. It can redefine growth away from reliance on such statistics as GDP and instead link prosperity to environmental sustainability, income equality, cultural expression, community health, and individual freedom. It could stress well-being, a concept that already has wide currency in Korean culture.

Of course, Korea could wait for other countries to take the lead in what will ultimately have to be a global transformation. But Korea has been a leader in technology, in renewable energy, in demonstrating what a population can achieve in the space of a single generation. For those reasons, I put my money on Korea as the country best positioned to lead the world in its next and perhaps most important economic revolution.

"Can South Korea Save the Global Economy?"