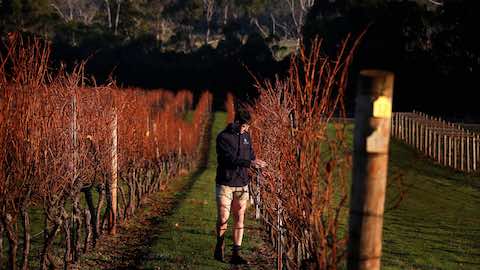 by Harry Pearl and Tom Westbrook

The value of Australian wine exports to China surged 40 percent, industry figures showed, unexpectedly driven by sales of premium labels rather than the cheaper wines that major producers had been looking to boost.

The jump defies a Chinese government crackdown on corruption that has cooled flashy spending there. If anything, industry insiders said the anti-graft campaign had been a boon for the likes of Treasury Wine Estates' top label Penfolds.

"Rather than drinking the super-expensive French wines, they were turning to Australian wines which were more affordable. Penfolds in comparison is (much cheaper)," wine exporter Greg Corra, managing director of Canberra-based Inland Trading, told Reuters.

A bilateral free trade agreement signed in 2015 has also boosted sales by cutting tariffs, and encouraged Chinese purchases of vineyards and grape processing plants in Australia. Even so, France continues to dominate China's wine market with a market share about twice the size of Australia's.

Shares in TWE rose 3.4 percent, outpacing the S&P/ASX 200 index which gained 0.72 percent. Treasury declined to comment on Friday ahead of its Feb. 14 earnings announcement.

"I think the premium end is always going to underpin some of the growth at Treasury because it's better known for its premium wines," said Mark Daniels, investment director at fund manager Aberdeen Asset Management, which holds a small stake in the company.

Last August the company reported a doubling of annual profit underpinned by a 76 percent surge in sales by volume to Asia. The company said at the time it expected fastest growth in the mid-market, where it was targeting millennial drinkers.

The fastest-growing export segment was wine priced between A$30 and A$50 ($22 to $38), according to the Wine Australia. Australian exports to the United States and Britain also rose.

But shipments to Hong Kong fell by 16 percent as many exporters re-routed stock directly to mainland China, where tariffs once as high as 20 percent are now below 9 percent.

"We're very excited about it, it'll make quite a significant difference," he said.