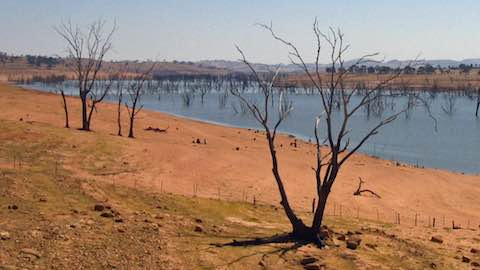 By Elizabeth L. Chalecki (The Strategist)

Australia, with 23 million people and a GDP of almost $1.2 trillion, isn't the largest, richest or most powerful nation. However, Australia possesses something unique: a willingness to articulate norms for the global good.

Hard on the heels of increasingly warm years, harvest-destroying heatwaves, and multiple billion-dollar storms comes a frightening number: 407. That is the ambient concentration of CO2 as of July 2017, the highest it has ever been in human history.

Climate change is recognised as a security threat by nations and military forces all over the world. Hotter temperatures, more variable precipitation, rising sea levels, and more extreme weather events will result in the degradation of military forces and installations, new public health threats, and the displacement of record numbers of people. But just when we need a strong global regime to address this enemy-less threat, our chances of forming such a regime are dwindling for lack of a leader.

The United States has been the chief architect of the post -- World War II liberal international order that relied on free trade and collective security to manage threats and ensure peace, but it is now divesting itself of that leadership role. President Donald Trump has indicated his dissatisfaction with NATO and his intention to withdraw the United States from NAFTA, the TPP and the Paris climate agreement.

If there was ever a security issue that required a collective approach to manage successfully, it's this one! Such a collective security regime doesn't necessarily need to be global, though the underlying climate problem certainly is. Even regional alliances and regimes that cooperate to manage the effects of climate change would provide a significant security benefit, in the form of both timely responses to shared threats and coherence between the national climate policies of participating states.

But climate regimes don't magically appear out of thin air. If the US is exiting stage right, then another nation will have to step in and take the Americans' place in guiding this regime to its desired operability. Lisa Friedman in the New York Times posited that, for various reasons, China, Canada, the EU, the United Nations, and US state and local governments aren't well suited for the task. However, there's one nation that has both the technological power and the stand-up reputation to do so. Why not Australia?

If size and power were the sole determining factors, China would seem to be the natural heir to the US in formulating international law. Australia, with 23 million people and a GDP of almost $1.2 trillion, isn't the largest, richest or most powerful nation in the Asia -- Pacific. However, it possesses something unique in the region: a willingness to articulate norms for the global good.

Australia has a deserved reputation as a good international player. It's a party to almost every applicable international regime. And it accepts the jurisdiction of the International Court of Justice and International Criminal Court (the United States does not) and has served on the UN Security Council five times, ending its most recent term in 2014.

Australia is also particularly vulnerable to the effects of climate change. The continent receives an average of less than 600 millimetres of rainfall a year, and prolonged droughts are already a serious problem. Increasing ambient air temperatures and changing precipitation will affect the nation's food security. Sea-level rise and extreme weather events will threaten infrastructure and coastal populations. Wicked second-order problems like climate refugees, new threats to public health, and the completely foreseeable call for international peacekeeping troops and humanitarian aid will all affect Australia.

In international law, you can't make the rules if you don't sit at the table. In this case, Australia's leading presence in forming a new Pacific climate regime would mean that it could help shape the regime to its own sense of justice. Want to embrace the principles of joint implementation and loss and damage? Write them into the founding documents. Think science policy should be based on actual science? Insist on an independent scientific advisory board vetting the information underlying any policies, and nominate people to sit on it.

Embracing norms of international cooperation, honest dealing, and policies based on science would be a welcome change at the upper levels of climate diplomacy, especially in the face of American abdication. And even nations that don't formally join the regional regime will face pressure to abide by the norms of behaviour that the regime spells out -- which seats Australia not only at the table, but at the head.

Why bother with the head of the table? In a word, power. By leading the formation of a new Pacific climate regime, Australia can raise its profile as a significant regional player and ensure that its national interests are looked after. The Australian Defence Force has already embraced the concept of climate change as a 'significant and growing national security threat', and the PM has indicated Australia's willingness to commit to long-term partnerships in the Pacific. These other nations can and should look to Australia as they once looked to the United States -- as a nation with a firm grasp on reality and its eye on a secure future of its own making.

Elizabeth L. Chalecki is an assistant professor of international relations at the University of Nebraska -- Omaha and a non-resident research fellow at the Stimson Center, Washington DC. Image courtesy of Flickr user Tim J Keegan.