Australia Shark Attacks Could Take Bite Out of Tourism 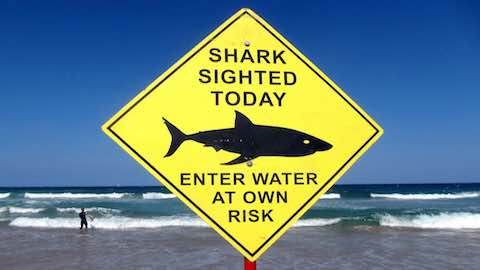 Australia Shark Attacks Could Take Bite Out of Tourism

A series of shark attacks off Australia's northeast coast has given the tourism industry the shudders, prompting a controversial deployment of protective nets to save lives and guard the country's reputation as a holiday destination.

Australia ranked behind only the United States in the number of unprovoked shark encounters with humans last year, the International Shark Attack File of the University of Florida shows.

There have been 16 attacks in the last two years, data from the Shark Research Institute shows, including one death, off the coast of New South Wales, a region favoured by tourists for its proximity to the international gateway of Sydney.

"When I surf, I always think about sharks," French tourist Alexandre Monteiro, 22, told Reuters. "Mostly when it's cloudy, or when the water is not clear."

The tourism industry, which supports one in three jobs and brings about A$3.7 billion into the regional economy, hailed the federal government's use of a national interest exemption to permit shark nets on five beaches over the busy summer holidays.

"Whenever there is a life at stake something needs to be done," Cameron Arnold, chairman of tourism body the North Coast Destination Network, told Reuters.

Current environmental laws ban such nets, but a decades-long netting program in heavily-populated areas such as Sydney and northern Queensland dates from before the laws were adopted.

While closely watched by businesses at holiday sites around the nation, the new shark nets have sparked heated debate over their usefulness and the harm they cause to marine life.

"We're going to see an increase in turtles, rays and seals trapped and killed in these nets."

The nets, about 150 metres (164 yards) long and six metres (7 yards) deep, stretch along roughly 200 km (124 miles) of coast between the cities of Newcastle and Wollongong.

Only the South African province of KwaZulu-Natal has a netting program on a similar scale.

The shark attacks have hit the holiday towns of Lennox Head and Ballina the hardest. Registrations and donations are down at surf lifesaving clubs and plans for several summer events have been scrapped, the New South Wales government says.

Visitors further north, in the tourism mecca of Byron Bay, have been left on edge by four shark attacks since 2015 began.

"Surf shops, places like mine, are front and foremost," said Loosemore, who estimated some businesses saw revenue shrink as much as a third after the attacks. Reuters could not independently confirm the figure.

Environmentalists say the nets authorities are relying on to discourage attacks can also harm a number of threatened and migratory species, including white sharks, and are outlawed by some federal and state protections.

"It's extremely difficult, if not impossible, to determine, from a scientific perspective, whether shark nets work," said Daryl McPhee, an environmental science professor at Bond University.

Tracking changes in the numbers of attacks is difficult, since they are rare and irregular, and little is known about why spikes occur.

The state's nets trapped 133 sharks and 615 other animals, during the period they were in use in 2015 and 2016, data showed this month. Just over half the animals were freed alive.

That compares with 44 sharks and 145 other marine animals caught and killed in the nets in the corresponding 2014-2015 period.

The nets are used only between the months of September and April, and removed between May and August, the season of the annual whale migration.

If the nets don't work, tougher measures, such as a cull of the animals, could be needed, say water sport enthusiasts.

"If things don't change, we have to think about managing and removal of sharks," said Don Munro, president of a group of boardriders. "Otherwise we're just going to see more and more attacks."

"Australia Shark Attacks Could Take Bite Out of Tourism"