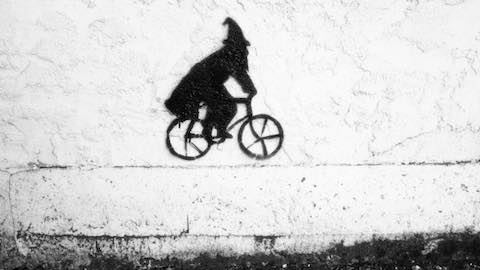 Australian politics is the art of riding a bicycle along a tightrope, pedalling furiously, using one hand to alternatively whisper into a phone and scream into a megaphone, while the other hand is used to cook a complex meal. And always the imperative is to both balance and steer the bike.

Australian politics is the art of riding a bicycle along a tightrope, pedalling furiously, using one hand to alternatively whisper into a phone and scream into a megaphone, while the other hand is used to cook a complex meal. And always the imperative is to both balance and steer the bike.

The bike-on-a-wire juggle is about communication and creation, plus the fundamentals of push and progress to avoid falling off. The image is political pedalling -- its essence is power.

Australia is unusual in housing the executive government and the parliament in the one building. Everything happens in the same place, up on the hill under the giant flag, where the politics and the policy meet the people: law-making and governing amidst debate and division -- and not just the voting divisions in the chambers.

The house on the hill is where Australia confronts its pressures and problems, a place of persuasion and policy decision. The parties caucus, the House and Senate enact, and out the back the ministerial offices jostle as the cabinet governs.

Mario Cuomo's truth applies in Canberra: 'You campaign in poetry. You govern in prose.'

The soaring visions of campaign verse turn pragmatically prosaic by the time they've been through the voting mill on the hill. Labor MP Andrew Leigh expresses the Cuomo line in a simpler Oz form: 'While politicians campaign in “and”, we govern in “or”.'

The campaigning pollie can promise this and that and the other and more besides. But when they sit down under the big flag, they confront a simple, tough reality: 'To govern is to choose.' And so they must choose between this or that. The or truth is that each dollar is spent only once.

The and/or crash of the prose against the poetry can push the cyclist to pedal harder, or so jam the works that the immobile bicycle tumbles off the wire. That was what George Megalogenis described as the enigma of Kevin Rudd:

He came to office with more than 600 promises to implement and a determination to win every day in the media. Ambition and indecisiveness linked arms to create an unusual model of leadership. Rudd talked and talked. In the end, he was all doorstop and no delivery.

Canberra does doorstops by the dozen. Delivery is tougher.

Having spent five years reporting in the old parliament building and a total of 20 years in the new parliament, I'm fascinated by attempts to describe how Canberra's bike-on-the-wire act works. Instead of political theory and academic explanation, I favour 'how-to' lists and the meanings offered in memoirs and anecdotes.

My unholy trinity of how politicians operate in Canberra is this:

For the public service, the first two rules shift dramatically:

The best list I've seen was written more than 20 years ago by John Kerin, who was a Labor cabinet minister for a decade:

The game hasn't changed much, to judge from the laws of politics handed down in 2012 by another former Labor minister, Lindsay Tanner:

All this is preparation to direct you to a fine Monthly essay by former Greens Senator Scott Ludlam, 'How politics works in Australia, and how to fix it'. It's an excellent insider-as-outsider description of what goes up the hill, how the battles get fought, and what comes down the hill as a result. I like it a lot, as much for the bits I argued with as for those where I nodded in agreement. Ludlam writes -- and writes well -- about the diverse realities of Parliament House: representative democracy as a 'festival of mediocrity', a caffeinated jumble of intensity and hilarity.

It's tough up on that tightrope -- balance and steer, shout and create, persuade and punish. One of our most important institutions can be circus one moment, colosseum the next.