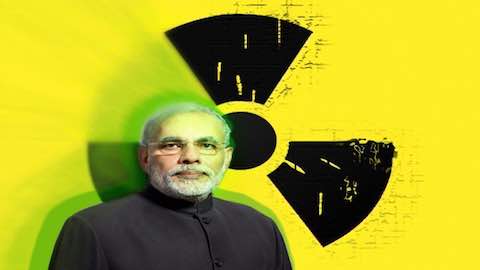 By roping India and Japan into its standoff with China, the United States is raising the nuclear stakes in Asia -- including, dangerously, between India and Pakistan.

With the world focused on the scary possibility of war on the Korean Peninsula, not many people paid much attention to a series of naval exercises this past July in the Malacca Strait, a 550-mile long passage between Sumatra and Malaysia through which pass over 50,000 ships a year.

With President Trump and North Korean leader Kim Jong Un exchanging threats and insults, why would the media bother with something innocuously labeled "Malabar 17"?

Malabar 17 brought together the U.S., Japanese, and Indian navies to practice shutting down a waterway through which 80 percent of China's energy supplies travel and to war game closing off the Indian Ocean to Chinese submarines. If Korea keeps you up at night, try imagining the outcome of choking off fuel for the world's second largest economy.

While Korea certainly represents the most acute crisis in Asia, the diplomatic maneuvers behind Malabar 17 may be more dangerous in the long run. The exercise elevates the possibility of a confrontation not only between China, the U.S., and India, but also between India and Pakistan, two nuclear-armed countries that have fought three wars in the past 70 years.

A Wedge Against China

This tale begins more than a decade and a half ago, when then Under Secretary of Defense for Policy, Douglas Feith -- one of the most hawkish members of the George W. Bush administration -- convened a meeting in May 2002 of the U.S.-India Defense Policy Group and the government of India.

As one of the founding members of the Non-Aligned Movement, India traditionally avoided being pulled into the Cold War between the U.S. and the Soviet Union. But the Bush administration had a plan for roping India into an alliance aimed at containing China, with a twist on an old diplomatic strategy: no stick, lots of carrots.

At the time India was banned from purchasing uranium on the international market because it had detonated a nuclear weapon in 1974 and refused to sign the Nuclear Non-Proliferation Treaty (NPT). There was a fear that if India had nuclear weapons, eventually so would Pakistan, a fear that turned real in 1998 when Islamabad tested its first nuclear device.

Under the rules of the treaty, both countries were excluded from the 45-member Nuclear Suppliers Group. While the ban was not a serious problem for Pakistan -- it has significant uranium deposits -- it was for India. With few domestic resources, India had to balance between using its uranium for weapons or to fuel nuclear power plants. Given that India is energy poor, that was a difficult choice.

When the Bush administration took over in 2001, it immediately changed the designation of China from " strategic partner" to "strategic competitor." It also resumed arms sales to New Delhi despite India's 1998 violation of the NPT with a new round of tests.

Then Washington offered a very big carrot called the 1-2-3 Agreement that allow India to bypass the NPT and buy uranium so long as it’s not used for weapons. This, however, would allow India to shift all of its domestic fuel into weapons production.

At the time, Pakistan -- which asked for the same deal and was rebuffed -- warned that the agreement would ignite a nuclear arms race in Asia, which is precisely what has happened. India and Pakistan are busily adding to their nuclear weapons stocks -- as is China and, of course, North Korea.

The 1-2-3 Agreement went into effect in 2008, although it has not been fully implemented.

Complicating this whole matter are ongoing tensions between India and Pakistan in Kashmir, over which the two have fought three wars, the last of which came close to going nuclear. Rather than trying to defuse a very dangerous conflict, however, the Bush administration ignored Kashmir. So did the Obama administration, in spite of a pre-election promise by Barack Obama to deal with the on-going crisis.

It would appear that a quid pro quo for India moving closer to the U.S. is Washington's silence on Kashmir.

In 2016, the Obama administration designated India a "Major Defense Partner," made Japan a permanent member of the Malabar exercises, and began training Indian pilots in "advanced aerial combat" at Nellis Air Force Base in Nevada.

The Trump administration has added to the tensions between India and Pakistan by encouraging New Delhi to deploy troops in Afghanistan. While India already has paramilitary road building units in southern Afghanistan, it does not have regular armed forces in the country. From Islamabad's point of view, Indian troops in Afghanistan will effectively sandwich Pakistan, north and south.

So far, India has resisted the request. But it’s hardly sending reassuring signals to Pakistan.

The government of Indian Prime Minister Narendra Modi has rolled out a new military strategy called "Cold Start," which allows the Indian military to attack and pursue "terrorists" as deep as 30 kilometers into Pakistani territory.

The danger is that a "Cold Start" operation could be misinterpreted by Islamabad as a major attack by the far larger Indian army. Faced with defeat, Pakistan might resort to tactical nuclear weapons, a decision that Pakistan has recently delegated to front-line commanders. Since India cannot respond in kind -- it has no tactical nukes -- New Delhi would either use its high yield strategic nuclear weapons or accept defeat. Since the latter is unlikely, the war could quickly escalate into a general nuclear exchange.

Such an exchange, according to a recent study by Scientific American, would not only kill tens of millions of people in both countries, it would cause a worldwide nuclear chill that would devastate agriculture in both hemispheres. In terms of impact, as scary as the Korea crisis is, a nuclear war between Pakistan and India would be qualitatively worse.

During his recent Asia tour, Trump used the term "Indo-Pacific" on a number of occasions, a term that was originally coined by the right-wing Prime Minister of Japan, Shinzo Abe. Japan is currently in a tense standoff with China over several uninhabited islands in the East China Sea, and Abe is trying to dismantle Japan's post-World War II "peace constitution" that restricts Japanese armed forces to "self-defense" operations.

Abe is also closely associated with a section of the Japanese political spectrum that argues that Japan was simply resisting western imperialism in World War II and denies or downplays its own colonial role and the massive atrocities committed by the Japanese army in China and Korea.

Asia looks like a pretty scary place these days. A right-wing Hindu fundamentalist government in India and a revanchist Japanese prime minister are allied with an increasingly unstable administration in Washington to surround and contain the second largest economy in the world.

There are some hopeful developments, however.

For one, following the recent Communist Party Congress, China seems to be looking for a way to turn down the heat in the region. After initially threatening South Korea for deploying a U.S. anti-missile system, the THAAD, Beijing has stepped back and cut a deal: no additional THAAD systems, no boycott of South Korean goods.

The Chinese also dialed down tensions with India in the mountainous Doldam region on the border of China and Bhutan with an agreement for a mutual withdrawal of troops. There has been some progress as well in finding a non-confrontational solution to China's illegal claims in the South China Sea, although Beijing is not likely to abandon its artificial islands until there is a downsizing of U.S. naval forces in the region.

And in spite of the tensions between the two, India and Pakistan formally joined the Shanghai Cooperation Organization this past summer, a security grouping largely dominated by Russia and China.

The danger here is that someone does something stupid and things get out of hand. There are those who point out that in spite of similar tensions during the Cold War, all concerned survived those dark times. That, however, ignores the fact that the world came very close to nuclear war, once by design -- the Cuban missile crisis -- and several times by accident.

If you keep rolling the dice, eventually they come up snake eyes.

Geoffrey Fattig was formerly a speechwriter for the U.S. Department of State and is currently the deputy international editor at the Hankyoreh newspaper in Seoul. He holds a master's degree in International Affairs from UC San Diego's School of International Relations/Pacific Studies.