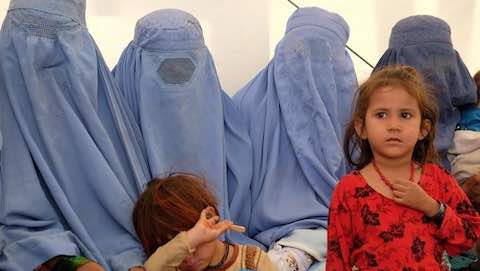 Thousands of undocumented Afghans have returned home from Iran and Pakistan, raising concerns over how the war-torn Asian nation will cope with the rising influx.

The vast majority were young men crossing the border from Iran.

Although repatriation is not compulsory, the Pakistani government has stepped up pressure to send people back amid growing local animosity towards Afghan refugees.

The United Nations migration agency -- the International Organization for Migration (IOM) - said most returnees from Iran were young men deported while looking for work, or on the migration route to Europe. Future patterns were hard to predict.

"It can be very unpredictable as there are a lot of factors at play that could push returns up at any day," said  Matthew Graydon, a UN spokesman in Afghanistan.

Graydon said unregistered Afghans face greater challenges than returnees who are officially logged as refugees because they are not entitled to cash grants from aid agencies, nor other benefits such as education or government-allocated land.

In the first week of 2017, 1,643 unregistered Afghans chose to return or were deported from Pakistan, and 7,776 returned from Iran, according to the IOM, with more expected as the weather improves in the next two months.

Another half a million undocumented Afghans are expected to be repatriated from Pakistan by the end of 2017. Numbers of returnees have been steadily rising over the past two years, with no letup in sight.

Since January 2016, more than 700,000 unregistered Afghans have returned from Pakistan and Iran, up 50,000 on the year before, the IOM said, stretching limited resources in a country still under threat from the Taliban, al Qaeda and Islamic State.

The rise in returnees comes amid a precarious security situation in Afghanistan, which has seen a steady increase in attacks since international troops ended combat operations in 2014, with record numbers of civilian casualties.

"There's still a lot of fighting here and it's put a lot of strain on the services and economy," said Graydon.

"We're ramping up and scaling up our facilities at the borders to be able to support a lot more families and we are anticipating that a lot more people will come," he told the Thomson Reuters Foundation in a telephone interview.

After the 1979 Soviet invasion of Afghanistan, more than 6 million Afghans crossed into neighbouring Pakistan and Iran.

IOM transit centres near the borders are providing basic accommodation, protection for unaccompanied minors, healthcare, household items such as pots and pans, as well as transport for families to resettle in their desired location.

"It's going to take a concerted effort within the humanitarian community and the government to make sure that their reintegration needs are met," said Graydon.