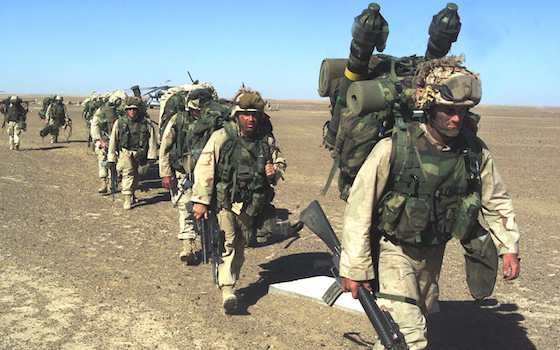 As public support for sweeping security surveillance of Americans' phone traffic to frustrate terrorism at home appears to be coming unglued, so has their patience with the longest war in U.S history, in far-off and incomprehensible Afghanistan.

The latest poll has found that 66 percent of Americans surveyed now say they don't think the war that began in response to the 9/11 terrorist attacks was "worth fighting," and 50 percent hold that view "strongly."

The findings are a sharp contrast to the 94 percent of respondents who supported military action when the invasion of Afghanistan began in 2001 to hunt down al-Qaida terrorists harbored there by the ruling Taliban regime. While that regime was soon deposed, the war dragged on as political instability continued. The U.S. mission was broadened to maintain a stable government and society there, and has remained ever since.

Despite the growing clamor for the United States to get out of Afghanistan altogether, the same poll has found that 55 percent of Americans surveyed would favor keeping some U.S. forces there "for training and anti-insurgency operations," a current sticking point.

After intensive and frustrating negotiations with Afghan President over a security agreement retaining up to 10,000 American troops after 2014 for such training of Afghan forces, the soon-to-depart Karzai has balked on signing it. Meanwhile, the U.S. presence is to be reduced from 47,000 to 32,000 by February.

The sharp decrease in American support obviously reflects disenchantment as the focus and purpose of the U.S. mission has switched from a highly popular military response to the 9/11 attacks to discouraging efforts to restore and solidify the Karzai regime. It has been a disputatious partner in a war that became essentially an exercise in nation building.

The Bush administration's invasion of Iraq in early 2003 on grounds that the Saddam Hussein regime had weapons of mass destruction was a sharp pivot from the unfinished war in Afghanistan, and undoubtedly was a factor in its longevity. That second, simultaneous, war also began with wide American public support but eventually lost it too. The Iraq adventure ousted the ruling regime but also turned into a nation-building exercise in behalf of an elected but similarly contentious regime in Baghdad.

In the 2008 American presidential campaign, Democratic nominee promised to extricate the United States from both wars. He eventually withdrew the American combat forces from Iraq but left a limited training force behind, and then began to do the same in Afghanistan.

However, terrorist attacks and other violence have continued to frustrate American policy in Iraq and in Afghanistan, and that has soured what earlier had been strong support at home for both military undertakings. As the Great Recession produced dire economic consequences domestically, including high and stagnant unemployment and a shrinking middle class, these foreign adventures have taken a particular heavy toll on President Obama's approval ratings.

As a result, his efforts to return American foreign policy away from the unilateral interventionism of the previous administration have become a long and frustrating slog. Obama did, however, avoid further involvement abroad with only a limited, secondary role in the ouster of Libyan strongman Moammar Gadhafi -- for which he was ridiculed as "leading from behind."

More recently, Obama also stepped back from military action in Syria over the Assad regime's use of chemical weapons in the civil war there, achieving the surrender and ongoing destruction of its cache under international supervision. But the continuing fighting in Afghanistan remains a thorn in his side, as the latest poll underscores.

With his hands full trying to straighten out the mess of his health-care insurance rollout, Obama's foreign policy has for now at least taken a back seat to public appraisal of his performance as a competent manager of one of the world's largest bureaucracies.

Yet his determined pivot away from military involvements abroad could prove to be his most notable achievement in office, if he can avoid further such engagements over his remaining three years there, of which there is no guarantee.