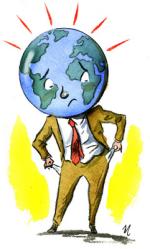 Since the 1960s, Asian economies have focused primarily on exports. It was the key to success in Japan, South Korea, Hong Kong, Singapore, and Taiwan. Much of Southeast Asia and China soon followed suit. Over the past decade, the region's exports have increased from 37 percent to 47 percent of GDP. By hitching their wagons to exports, however, Asian countries left themselves vulnerable to a drop-off in Western consumption.

Of all the unprecedented things that have happened during the economic crisis in Asia, the most startling occurred in early 2009, when shipping rates between China and Europe temporarily fell to zero.

The collapse in prices represented more than a downturn in trade: it exposed fundamental problems with Asia's economic development model.

Since the 1960s, these economies have focused primarily on manufacturing for export.

It was the reason for the stunning success and rapid increase in standards of living in Japan, South Korea, Hong Kong, Singapore, and Taiwan. Much of Southeast Asia and China soon followed suit. Over the past decade, the region's exports have increased from 37 percent to 47 percent of GDP.

By hitching their wagons to exports, however, Asian countries left themselves vulnerable to a drop-off in Western consumption.

In the current downturn, demand from the United States and Europe continues to plummet, furthering delaying recovery.

Meanwhile, social and political foundations were routinely neglected, from underinvestment in public education, health care, and social services, to poor governance and weak rule of law. Business and political leaders who benefited most from rapid economic growth largely ignored these issues, while the general population remained content as long as their incomes increased year after year.

Although it is hard to believe when visiting the region's major cities--newly blanketed with luxury malls, expensive bars, and fancy cars -- private consumption and wages as a proportion of overall GDP have actually fallen over the past two decades. While people are much better off than in the past, their well being has not kept pace with the growth around them.

Despite the recent spate of positive news these days -- stock markets rallying and bank lending on the rise -- the region's real economies are still struggling.

This comes as a surprise to many who believed that the Asian miracle knew no limits, with year after year of strong performance. Financial institutions largely eschewed toxic U.S. and European assets, governments displayed fiscal restraint and corporations maintained healthy balance sheets.

The region as a whole, however, is ill prepared for a drawn-out period of slower growth and a fragile middle class is increasingly at risk. Asia is left with some very hard decisions to make in a decidedly more difficult economic environment.

A major rebalancing clearly needs to take place, whereby the reliance on exports is reduced in favor of stimulating domestic consumption, the key driver of sustainable growth. To their credit, Asian countries have been quick to respond to the downturn. Across the region, approximately $1 trillion has been earmarked for stimulus measures.

However, although the plans make a point of investing in social programs, the bulk of the spending is on infrastructure projects (some clearly useful, others of questionable merit). Less than four percent of China's $587 billion stimulus is for healthcare and education.

Instead, there are more substantial policies that can be implemented in the areas of promoting human capital, improving incomes, and reducing savings. One positive long-term effort would be to expand the inadequate levels of national student loan and grant programs that currently exist. In this way, parents could pare back their savings in this area of critical financial concern.

Asian countries can also improve the structure of their labor markets through increased minimum wages as well as skills development. Depressed wage growth is one reason household income as a proportion of GDP has actually declined across Asia in recent years. In China's southern manufacturing heartland, competition for the lowest prices drove wages down, while factories with higher-skilled jobs routinely struggled to find enough employees.

Most importantly, Asian countries must invest in viable social safety nets before the wave of retirees significantly distorts social demographics. The lack of basic economic safeguards helps explain why Asian households save so much--between 10 and 30 percent of their annual income. They feel the need to "self-insure."

One way to alleviate this is to create a "social wealth fund" endowed with a portion of the government's stakes in state-owned companies. Dividends could be earmarked for a range of social initiatives such as social security and health care.

It is clearly in no one's interest to see Asia in disarray. A prosperous region can increase global economic growth, enhance stability, and continue lifting millions of people out of poverty. How the region responds to the current crisis--and how the West helps it cope--will determine the depth and duration of Asia's economic woes.

While the region will still boast powerful economies over the course of this century, a more sustainable economic model must be found.

If the root cause of unbalanced growth is not addressed, Asia's problems will become the world's.