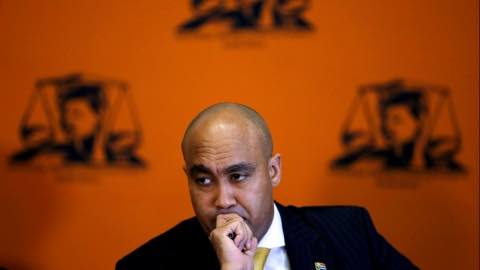 Shaun Abrahams, the national director of public prosecutions at the National Prosecuting Authority, announced that Zuma will face sixteen charges of corruption and money laundering.

Shaun Abrahams, the national director of public prosecutions at the National Prosecuting Authority, announced that Zuma will face sixteen charges of corruption and money laundering. The governing African National Congress (ANC), which Zuma dominated during his years as party president and state president of South Africa, has restricted itself to affirming its confidence in the South African judicial system in its official statements. The Rand, South Africa's currency, remained steady following the announcement.

Prosecution follows nine years of legal efforts by Zuma, at the taxpayers' expense, to get the charges set aside. They date from an arms deals in the 1990s, and the prosecuting authority set them aside in 2009 shortly before Zuma was elected state president. In 2016, the High Court reinstated the charges and Zuma lost his legal battle to overturn that ruling. Now, Abrahams says that prosecution will proceed, and that "there are reasonable prospects of a successful prosecution."

Abrahams has widely been seen as a political ally of Zuma, with critics claiming that Zuma irregularly appointed him director of public prosecutions to forestall his own prosecution. In the end, the courts sided with the critics and required current President Ramaphosa to appoint a new director within sixty days of its ruling. That time period has not yet lapsed, so Abraham remains in office. His replacement will be responsible for the prosecution of Zuma, but it is not yet clear who Ramaphosa will appoint.

That Abrahams is proceeding with prosecution shows just how far Zuma has fallen and how few allies he apparently still has within the ANC. Critics will likely question whether Abraham has made some sort of deal with the new Ramaphosa administration.

Prosecution of Zuma is a double-edged sword. South African civil society widely believes that Zuma is corrupt and that he should therefore be tried. Time after time, South Africans have reaffirmed their support for the rule of law and an independent judiciary. For his part, Ramaphosa, one of the architects of South Africa's constitution, has always been a staunch supporter of the law. Not to try Zuma would be viewed by many as evidence that the Ramaphosa administration had "sold out," that corruption has no consequences, and that he is willing to compromise on the rule of law for political ends. On the other hand, Zuma remains popular in his native KwaZulu and among the Zulus, South Africa's largest ethnic group. Ramaphosa has therefore sought to treat Zuma with dignity, but also cannot be seen as favoring Zuma in the impending prosecution. Furthermore, it remains to be seen whether Zuma's trial will expose the corrupt behavior of other ANC politicians still in office and how this affects party unity. For the time being, however, most South Africans across the political spectrum are likely to support the decision to prosecute.