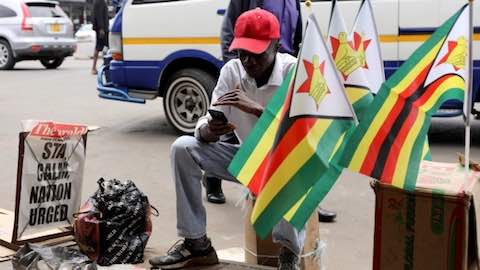 Though President Mnangagwa faces a withered and splintered democratic opposition, a key test for him and his government will be how restive informal workers like street vendors and their associations fare in the coming years.

The rapid fall of Robert Mugabe and ascent of former ally Emmerson Mnangagwa stunned even those closely following the country's long-running succession drama. The decisive end of the succession question caught many by surprise, including most Zimbabweans, who poured into the streets to celebrate the end of Mugabe's thirty-seven year rule.

The crowds on the streets testify to both the pent-up energy of people suffering through extended economic malaise as well as the much understood (if unstated) illegitimacy of Mugabe's personal leadership. Decades of rigged and stolen elections, rampant corruption and nepotism, and outlandish propaganda clearly atrophied support for the nonagenarian president.

Though this is not a democratic transition, it's clear there is rising public expectation that things will get better -- particularly in terms of jobs. Managing the elevated expectations of the people will be a key test for Mnangagwa. He inherits the leadership of an economy that has barely managed to stay afloat. Zimbabwe likely lost over seventy-five thousand formal jobs annually between 2011 and 2014. Another thirty thousand were lost in 2015 and an estimated eighteen thousand in 2016. This decline highlights the country's two decades of deindustrialization, when formal employment was curtailed in rail, industry, agricultural processing, and transport. This process has resulted in over 95 percent of the country's citizens making their living through informal employment.

These job losses, more than anything, withered what was once the country's most viable democratic opposition, organized labor. With formal jobs and union membership in decline, it has been workers in the informal economy who not only help Zimbabweans survive economically, but have steadily become more organized and aggressive in their demands for economic access and rights. Street vendors and other informal workers, organized into membership-based organizations, embody both the entrepreneurial as well as associational traditions of Zimbabweans in the face of decades of downward mobility as well as the desire of people for more say.

Informal workers long garnered the negative attention of both Mugabe and the ZANU-PF. Seen as a base of democratic opposition, the government attacked informal workers in 2005's Operation Murambatsvina ("drive out the trash" in Shona), razing informal markets and settlements and putting almost six hundred thousand people into immediate homelessness. In recent years, well-organized groups of street vendors have faced ZANU-PF authorities in Bulawayo and Harare in arguments over economic access and vendors' rights, which were somewhat overshadowed by the public and media focus on succession infighting. These arguments often escalated to violent attacks on vendors and took on a more political tone, with Mugabe himself weighing in and threatening action.

Zimbabwe's informal economy is not only where most people earn their living but also where they spend their money and it is a critical link between urban and rural markets. Though President Mnangagwa faces a withered and splintered democratic opposition, a key test for him and his government will be how restive informal workers like street vendors and their associations fare in the coming years. The question remains whether these workers will have more access to formal jobs, rights, and economic opportunities, or whether Zimbabwe maintains an ossified, corrupt economy which only benefits the well-connected at the top.

John Hosinski is the former senior program officer of the Africa department at the Solidarity Center. He is currently a freelance writer based in Paris, France.