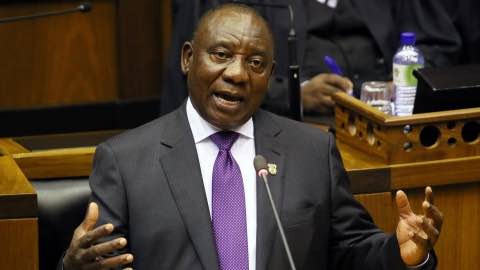 The ascendancy of Cyril Ramaphosa to the presidency of South Africa has been greeted with a mix of enthusiasm, relief, and skepticism.

It comes as South Africa prepares to celebrate the centenary of Nelson Mandela's birth and it is worth remembering that Ramaphosa was Mandela's first choice as his deputy, even though he was persuaded by the party to accept Thabo Mbeki. The country faces daunting challenges and Ramaphosa has only a slim majority of support in the National Executive Council of the African National Congress (ANC).

In his State of the Nation Address, corruption, jobs, and education stood out as the issues in need of immediate attention. President Ramaphosa addressed all three in some detail, but in trying to strike an optimistic note, he understandably glossed over many difficulties.

He gave prominence to rooting out corruption, which all agree is his most urgent task. It has corroded the effectiveness of government at all levels, from the cabinet down to the lowest ranking municipal or city official. "State Capture" involving Zuma and the Gupta family is only the most visible issue. Being a loyal ANC cadre became the sole criterion for selection to any official position, without regard to competence. Any service or contract inevitably resulted in kickbacks to those involved, artificially inflating prices. The result has been a deterioration in productivity and government effectiveness, and a steady decline in the overall growth of the economy since 2011. Per capita GDP growth was negative between 2012 and 2016, placing South Africa in the bottom twentieth percentile for the continent, just above Zimbabwe. Given this depressing picture, Ramaphosa needs to not only address corruption at the top of government and state enterprises, but throughout the ranks of the ANC down to the provincial and local government levels.

President Ramaphosa also focused on the need to provide jobs by restoring economic growth and development. Unemployment is over 36 percent and youth unemployment is even higher. About a third of the population is now receiving monthly social grants to keep them from poverty. Optimism and business confidence in Cyril Ramaphosa's considerable abilities will only go so far.

Renewed foreign direct investment will help to drive growth in the relatively sophisticated industrial sector, but will not do much for the large numbers of unskilled and poorly educated job seekers. Large-scale capital investment projects have up to now not been successful and real gross fixed capital formation is just above 18 percent, well below the government target of 30 percent. Large increases in government expenditures are constrained by the growing budget deficit, which now exceeds the apartheid-era high. Mr. Ramaphosa recognized this constraint in the budget just announced by finance minister, Malusi Gigaba, raising the VAT tax from 14 to 15 percent, the first increase since 1993, as well as increasing the income tax. Export-led growth will also be difficult to achieve with an unproductive, low-skilled, but relatively well-paid unionized workforce.

The government will need to develop creative new programs to address the problem of unemployment. President Ramaphosa outlined a number of suggestions in his address, including a Jobs Summit to explore practical solutions, infrastructure projects such as the installation of solar water heaters and the war on water leaks, the Employment Tax Incentive, and the Youth Employment Service Initiative, which will place unemployed youth in paid internships in companies across the economy. Other examples not mentioned include investment in labor intensive projects in low skilled sectors and a major emphasis on technical schools.

The third challenge is addressing the failure of primary and secondary education. South Africa is particularly weak in math and science, even when compared to other developing countries. The poor educational system is not a result of a lack of funding, but largely due to systemic problems. It starts with a lack of accountability at the administrator level, inadequate teacher training, and teacher unions that make holding teachers accountable for their performance (and even presence) in the classroom more difficult.

As with corruption and job creation, addressing the education problems will take new initiatives and time for the results to work their way through to the next generation of work seekers. Most importantly, literacy and basic education programs are urgently needed for those currently unemployed who left school early and still lack a basic education. Unfortunately, Ramaphosa's speech focused on the modest improvement in high school graduation rates and the politically charged issue of free university, not on primary education.

All these initiatives will require time and strong leadership to implement -- resources that are in very short supply. Of more immediate concern for the ANC are the 2019 national elections. Ramaphosa will have to prove that the party is serious about addressing corruption, joblessness, and education if they hope to capture over 50 percent of the vote. While there is good reason for optimism and faith in the resiliency of the country and its institutions, skeptics would be forgiven if they still have their doubts.

Author: Dr. Cedric L. Suzman was the founding executive vice president and program director of the World Affairs Council of Atlanta. He retired in 2015.