The Misleading Connections Between Terrorism and Ivory Poaching 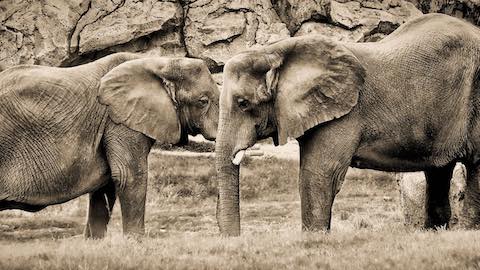 The Misleading Connections Between Terrorism and Ivory Poaching

Alex Reid looks at the evidence on the veracity of the connection between terrorism financing and ivory poaching.

The world is experiencing an 'environmental crime crisis'. Dwarfed only by the trafficking of drugs, humans and counterfeit goods, the illegal wildlife trade is estimated to be the fourth largest type of transnational organised crime. But compared to the smuggling of bullets and bodies, wildlife crime is vastly under-researched. Most people have not even heard of the world's most trafficked mammal, the humble and far from headline-grabbing pangolin. Yet one area of this booming illicit trade receives more attention than most: poaching for ivory and rhino horn.

Driven by growing Asian prosperity, particularly in Vietnam and China, a revived market for ivory and horn has expanded to unprecedented heights for modern times. Accompanying this growth is a narrative which connects poaching to insurgency and terrorism. Headlines on popular news sites like The Huffington Post carry the message that 'Ending Wildlife Trafficking Will Help the Fight Against Terrorism'. Though they exist, rare pieces rejecting the narrative are few and far between, with a much smaller readership. It continues to be a message that has a transatlantic audience among the readers of the New York Times to the English tabloid, the Mirror.

In the South African National Parks, home to the largest population of free roaming wild rhinos, poaching is a constant threat. Special-appointee General Johan Jooste has consistently depicted the poaching problem as a nationwide 'insurgency war'. Yet the three groups most commonly associated with financing insurgency through and ivory trafficking do not reside in South Africa. Instead, they are the Lord's Resistance Army (LRA) operating across East and Central Africa, the Janjaweed operating in Sudan, and Al-Shabaab operating in Somalia and Kenya.

Of these three, Al-Shabaab has been given the most attention with regards to their alleged connection to poaching, partly because of an influential 2013 report published by the Elephant Action League (EAL) entitled 'Africa's White Gold of Jihad.' EAL's report claimed Al-Shabaab financed up to 40 percent of their terrorist movement from 2010-2012 through the trafficking of 1-3 tons of ivory per month from the ports of southern Somalia. If true, dismantling the ivory trade provides a potent counterterrorism policy, and one worthy of national and international resources.

This particular connection between poaching and terrorism has been crucial in situating illegal poaching in Africa on the agenda of the United Nations, who identified the issue as a regional security threat in 2014. The illegal wildlife trade also rapidly climbed the U.S. policy agenda, partly motivated by the 'Call to Action' issued by then-Secretary of State Hillary Clinton. Whereas the 2011 U.S. Strategy to Combat Transnational Organised Crime omitted wildlife trafficking as a primary type of transnational organised crime, by 2013, President Obama's Executive Order 13648 established a Task Force to produce a National Strategy for Combatting Wildlife Trafficking on the grounds it was in 'the national interest of the United States.' Notably, Hillary Clinton's advocacy for this change in U.S. foreign policy was accompanied by rhetoric which explicitly connected the Janjaweed, LRA and Al-Shabaab to ivory poaching and therefore national security.

Yet when placed under closer scrutiny, EAL's report appears to suffer from critical methodological flaws. Firstly, the report fails to outline the rest of Al-Shabaab's funding portfolio and estimated expenses, throwing their 40% estimate into contention. Secondly, comparing the figures of the number of elephants poached in Kenya in 2012 in relation the volume of ivory allegedly exported, Al-Shabaab would have required all the ivory poached in Kenya to pass through Somalia, with additional sources of ivory from outside the area to supplement the volume.

This is highly unlikely, given that that the relatively small terrorist movement would have had to monopolise the entire trade, competing with not only established criminal poaching gangs in Kenya but lucky opportunists too. With no significant Al-Shabaab activity detected outside of the Kenyan-Somalia area during 2010-12, and no seizures of ivory in destination or transit ports traced back to Somalia during that period, it is clear this heady mix of environmental crime and terrorism has been misleading.

The EAL report clearly had a profound effect on the narrative surrounding the illegal wildlife trade. Of the 115 articles published between 2011-2015 citing Al-Shabaab's involvement with ivory, only 8 provided critical commentary, 48 used the report as their main source, 16 relied on circular media reporting, and 18 furnished no sources at all. Similarly, Lawson and Vines suggest there is no 'hard evidence' to link the LRA to poaching beyond relatively small and opportunistic volumes.

Basing policy responses on this flawed evidence has profound consequences. Privileging an unfounded or exaggerated connection between militant groups and the ivory trade is at best misleading, but at worst diverts limited resources away from where they could have the most impact. In her 2015 review of attitudes towards the illegal wildlife trade, Felbab-Brown, of the US think-tank Brookings Institution, cautioned against the 'over-securitisation' of the problem, resulting in a militarised and inappropriate response to what are instead problems of organised crime and corruption. Significantly, the distinction between crime and insurgency diverges over the legitimate use of force as a dominant, appropriate and effective policy response.

While framing the problem as a question of terrorist financing has helped to garner additional policy resources and international attention, it has been sold as a win-win for environmentalists and counter-terrorists alike. But this narrow lens has also led to a predominantly militaristic approach to the issue at the expense of other tools for engagement. Kenyan rangers, trained and equipped by the UK military, currently operate a shoot-to-kill counter-poaching policy. In South Asia, India also employs military tactics to combat illicit poaching. This is not to say that force is not required in the policy response to the poaching of critically endangered wild animals, but that the long history of the 'War on Drugs' and organised crime teaches us that going after low level operators that can be easily replaced will do little to deter the king-pins at the top of the trade.

As suggested by the recent release of a series of Whitehall Papers on the subject, it would be more useful to reclaim the definition of the activity as a form of transnational organised crime. This re-definition allows for a broader and more useful framework to investigate the multiple actors and activities which characterise the current poaching crisis. Redefinition offers a wider range of policy responses, including those which help to move away from tackling the issue only at the 'point of crime' to encompass the wider demand, corruption and trafficking chains that makes such a thriving transnational trade possible.

Even General Jooste, hired for his military credentials, recognises the complexity of dismantling a trade deeply embedded in organised crime and driven by such high profits. 'High demand for rhino horn means poaching cannot be defeated with force on force,' Jooste noted after his appointment, 'The only thing that can make a difference is taking on the crime networks. Victory will be won in the courts.' Jooste is right. Attention should instead be refocussed on transnational cooperation, rooting out both grand and petty corruption, and bolstering law enforcement at legislative and enforcement levels.

Africa - "The Misleading Connections Between Terrorism and Ivory Poaching"