The Governance of Ebola in Sierra Leone 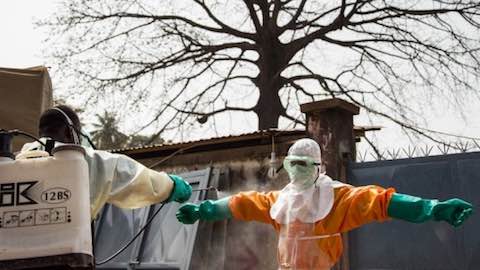 The Governance of Ebola in Sierra Leone

The Ebola Virus Disease (EVD) that broke out two years ago in the Mano River Basin countries of Guinea, Liberia, and Sierra Leone is considered "the largest, longest, most severe and complex" manifestation of the disease since its discovery, in the now Democratic Republic of Congo, in 1976. 1 This is because the outbreak took place across borders and in urban centers and had an unprecedented death rate. In August 2014, after it had spread in the previous month from the Mano River Basin to Nigeria,2 the World Health Organization (WHO) declared the epidemic an international public health crisis.

As these numbers indicate, both the prevalence of EVD and mortality rates were lower in Guinea, despite the disease having started there, than in the other two post-conflict countries. From a public health perspective, Guinea apparently has better preventive measures and EVD treatment than either Liberia or Sierra Leone. Liberia's high mortality rate shows EVD treatment is weaker there, while Sierra Leone's high prevalence rate is indicative of poor preventive measures.

Regrettably, with specific regard to prevention, governance of the health sector has not been a forte of post-war Sierra Leone. In 2012, for example, the government spent only $16 per person on health care.5 Moreover, Sierra Leone lacks the human resources necessary to deal with daily health issues, much less an epidemic, with the country having only one health worker per 5,319 citizens.6 Finally, health care is not universally accessible in Sierra Leone.

These shortcomings need not necessarily have resulted in an epidemic, however. In contrast, while Nigeria's public health system is also lacking, that country was able to tackle Ebola when the disease first arrived there. This was due to the government's effective collaboration with health authorities and strict enforcement of preventive measures (for example, tracing contact between people as the contagion spread) to contain EVD. Nigeria was thus declared EVD free on October 20, 2014, after just twenty cases and eight deaths.

The Poor Governance of the Ebola Virus Disease

The poor governance of EVD in Sierra Leone can be attributed to historical, institutional, and political factors. Historically, the health sector had yet to recover fully from the effects of the decade-long civil war that ravaged the country in the 1990s. Institutionally, the Infectious Disease and Environmental Health Divisions within the Ministry of Health and Sanitation (MoHS) were marginalized and lacking in technical expertise. The minister, Miatta Kargbo, who was uninformed about the disease, was unwilling to work with the WHO, whose country office also lacked the technical expertise to confront it. The ineptitude and wrangling between these two health focal points -- the MoHS and the WHO -- delayed the implementation of protocols needed to contain the spread of Ebola. To make headway in the unnecessary power tussle, both the minister and the WHO country representative had to be recalled from their posts.

Moreover, the National Ebola Response Centre (NERC), whose task was to coordinate the efforts of all partners engaged in the fight to stop the spread of Ebola and report infection, deliberately delayed the reporting of Ebola cases in the country. A health practitioner provides this account:

The morning of the president's Makeni visit, our medical lead receives a call from the District Ebola Response Centre (DERC) . . .the message being "Mateneh [Ebola Treatment Center], please DO NOT report any Ebola cases today. Reporting of any positive Ebola tests you receive today must be withheld for twenty-four hours. You can report them tomorrow but certainly not today!" . . . Our medical lead very quickly but very politely explains that this is not a request that the [International Medical Corps] is able to comply with. We report two new cases to the DERC later that day. The next day we all check the Sierra Leone NERC website to make sure our cases had been reported -- they had . . . There is a cynicism now developing. Each one of us now checks the NERC website daily, I have it bookmarked -- I'm learning -- about Ebolitics!!7

Although this is the only documented incidence of NERC's politicking with the publication of EVD cases, the fact that it can be done shows the lack of professionalism adopted by government officials in charge of protecting the lives of citizens during a health emergency. This is not surprising, however, because, as Koroma and Lv observed, "There seems to be more lip service than actual work being done."8 Their claim is based on observations of the government's incompetence:

The government continues to shift the goal post, and the rules are being changed in the middle of the game, resulting in Sierra Leone being the highest infected country in the Mano River Union.9

At the political level, Ebola was used as a propaganda tool by the opposition party to strengthen support and loyalty in its traditional strongholds. The party's base, Kailahun district, was the first area in the country to be hit by the disease, leading the opposition to claim the ruling party did not treat the issue with the urgency it deserved, as its own base was not affected. Opposition supporters also claimed the government's preventive protocols had political undertones. They argued that the rules and regulations were strictly enforced in the southern and eastern provinces -- opposition strongholds -- and not in the northern province, the ruling party's base. Regardless of the veracity of these assertions, the government's slow response to the epidemic, coupled with the above observations, gave the opposition party credence.

Second, the rules and regulations on burials and social activities were not applied uniformly but were based on class and other social inequalities. For instance, while some medical personnel were buried according to the Ebola burial guidelines, others were accorded full funeral rites and buried in normal cemeteries and not the designated Ebola sites. Also, at the height of the state of emergency, two members of the country's political elite lost their mothers. Although they did not die of Ebola, not only were they accorded full traditional burial rites10 -- a blatant violation of government's regulations, given that the government had prohibited traditional burials for both Ebola and non-Ebola patients during this period -- the associated social activities were held for them. Consequently, when the chief sowei, a female genital practitioner, died in Kailahun district and the DERC wanted her to have a funeral based on Ebola regulations, secret society members revolted and buried her according to their traditional rites.

While it is true that the three most affected EVD countries have weak health care systems -- partly due to the legacy of years of political instability and civil wars -- the extremely high rate of infection observed in Sierra Leone is attributable to poor governance, mishandling, and the politicization of EVD in the country. Sierra Leone's weak postwar governance structures were ill-equipped to handle regular public health demands and completely unprepared for a crisis of the magnitude occasioned by the outbreak of EVD. As a result, lives that could have been saved by effective prevention measures, quick intervention, and efficient management were needlessly wasted.

The author gratefully acknowledges comments made by Esther Murana and Hussainatu Abdullah.

Iyamide Olukoshi is from Nigeria and Sierra Leone. She is currently a student at the Friedman School of Nutrition Science and Food Policy at Tufts University. She holds a Master's in public health with a specialization and international focus in maternal and child health. She hopes to work somewhere in West Africa in the field of maternal and child nutrition. She is a huge football fan and loves running and learning new languages and cultures.

Africa - "The Governance of Ebola in Sierra Leone"