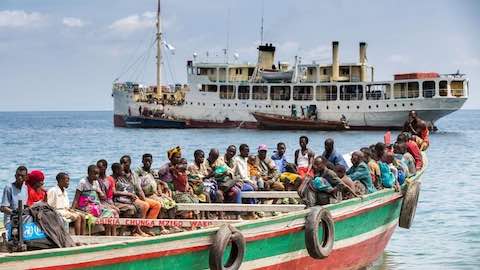 A move by Tanzania to ban refugees from entering the country in groups could undermine efforts to protect them and to provide humanitarian assistance, the United Nations refugee agency (UNHCR).

Tanzania's home affairs minister, Mwigulu Nchemba, announced recently the government would no longer accept groups of refugees at the border, instead it would vet individual cases before granting refugee status.

"We will no longer allow entry to refugees who come in groups. Anyone seeking asylum has from now on to be individually assessed by the relevant authorities," Nchemba said on a visit to the western Kigoma region, according to local media.

The east African nation hosts more than 280,000 refugees and asylum seekers, mostly from the Democratic Republic of Congo (DRC) and Burundi.

Fleeing political violence at home, some 10,000 Burundians arrived in neighboring Tanzania each month towards the end of 2016, swelling three already overcrowded northwestern camps.

"UNHCR has yet to receive a formal communication from the government of Tanzania on the matter," she told the Thomson Reuters Foundation.

"However if what is reported in the media is a true reflection of the government's position then we believe that there will be implications on the quality of refugee protection and humanitarian assistance provided to refugees."

The claims of at least 10,000 asylum seekers from DRC have been awaiting a decision since November, she said.

According to UNHCR, Burundians who have recently arrived in Tanzania reported that young people were still targeted for recruitment by the Imbonerakure youth militia group - and if denied entry their lives could be in danger.

"Our mandate does not allow us to ignore these accounts of violence or intimidation," Kapaya said.

More than 300,000 Burundians have fled since the political crisis began in April 2015 when President Pierre Nkurunziza decided to run for a third term, which he secured in a disputed election in July 2015.

Half of those fleeing Burundi have gone to Tanzania and others to Rwanda, Uganda and the Democratic Republic of Congo.

The refugees say they are fleeing violence and harassment, worsening hunger and an uncertain future.