South Africa's Ramaphosa is the Man of the Hour, Despite the Zuma Cronies 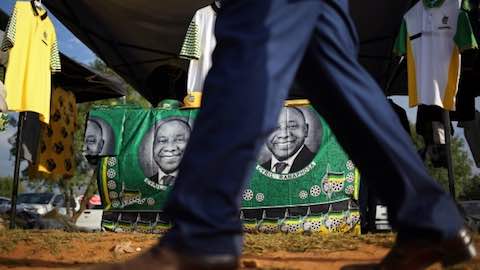 South Africa's Ramaphosa is the Man of the Hour, Despite the Zuma Cronies

Cyril Ramaphosa is elected the president of the party, and his victory shows the strength of the reform faction within the African National Congress, even if it is not absolutely predominant.

The euphoria among South Africa's friends over the election of Cyril Ramaphosa as president of the governing African National Congress (ANC) was followed by disappointment, if not despair, at the election of three members of the president Jacob Zuma/Dlimini-Zuma camp to the "Top Six" of the party leadership. The hope had been that Ramaphosa and a new ANC leadership would clean out the corruption and cronyism that so disfigured the years of Zuma government. Many South Africans saw the billionaire Ramaphosa as so rich that he would be above personal corruption. They hoped that a Ramaphosa administration and a revived ANC could restore an economic growth trajectory and end the (failed) assaults on the media and civil society characteristic of the Zuma administration.

Despite the disappointment, Ramaphosa is president of the party, and his victory shows the strength of the reform faction within the ANC, even if it is not absolutely predominant. It is likely that some of the Zuma faction will defect to Ramaphosa, even in the short term. The "Top Six" are not all equal. As president, Ramaphosa will have the largest voice on issues of cabinet and other appointments. Indeed, if Zuma is forced out of the presidency, it will be Acting President Ramaphosa who will be responsible for cabinet and other senior level appointments.

It is on matters of personnel that a Ramaphosa presidency of the party (and perhaps acting presidency of the country) can make his mark most easily. Especially toward the end of his administration, Jacob Zuma's appointments appeared to be the consequence of cronyism and perceived short-term political interest. Post-apartheid South Africa under Nelson Mandela and Thabo Mbeki had been characterized by talented cabinet ministers, especially at treasury and the central bank, as well as sound administration. State-owned enterprises were an exception, seemingly enduring nests of corruption. Ramaphosa is likely to return to that pattern. He is much better educated than Zuma, knows the outside world, and knows that solid financial institutions are vital to attracting the investment he believes South Africa needs. Ramaphosa also understands the need for efficient administration -- something that Zuma subordinated to short-term political goals. A Ramaphosa administration may make South Africa once again Africa's best administered state.

Nevertheless, the popular drivers of Zuma-style populism and tolerance for corruption remain: a society that is one of the most unequal in the world, where a small minority of white people live in the First World and the huge majority of black people live in poverty. Ramaphosa proposes to address this reality through economic growth rather than by redistribution, which would almost certainly make everybody -- black and white -- poorer. Yet accelerating economic growth takes time as well as political skill, and Ramaphosa will need to be lucky as well as politically adept.

Photo: A man walks past ANC merchandise with the face of newly elected president Cyril Ramaphosa outside the venue of the 54th National Conference of the ruling African National Congress (ANC) at the Nasrec Expo Centre in Johannesburg, South Africa. Siphiwe Sibeko/Reuters

Africa - "South Africa's Ramaphosa is the Man of the Hour, Despite the Zuma Cronies"