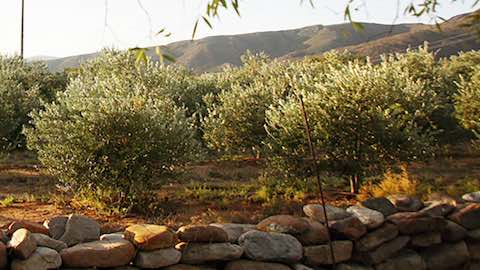 When Americans think olive oil, South Africa probably doesn't leap to mind, but like South African wine, the country's extra virgin olive oil is beginning to turn global heads. The industry was started by an Italian immigrant in the 1950s, but it's the new flush of small- to medium-size producers that are pressing the premium oils, and winning awards.

About 90 percent of South Africa's olive oil comes from the Western Cape, either from picturesque valleys where olive groves neighbor vineyards, or from the Karoo, a semi-desert farther north. "In the past eight years, South Africa's olive oil production has doubled, to 2.4 million liters (about 634,000 gallons) annually," says Nick Wilkinson, chairman of industry regulatory body SA Olive. Wilkinson and his wife, Brenda, are also producers; their Scherpenheuwel Valley farm, Rio Largo, is an hour and half drive from Cape Town.

For starters, nearly all South African olive oils are extra virgin. "There isn't enough volume to justify secondary production, which in itself is a savior of quality," Wilkinson says. Olives are handpicked apart from one or two large producers, and because volume tends to be low, are likely pressed soon after harvest.

A nurseryman from Genoa, Ferdinando Costa, recognizing similarities in climate, first brought olive trees to South Africa in the early 1900s. "Years after grafting imported cultivars onto Olea Africana, the indigenous wild olive, Costa decided it wasn't a fantastic bond, and started growing from root cuttings, which eventually became the norm," says granddaughter Linda Costa, an olive consultant. Costa persuaded a few local farmers to grow this unknown tree, and by the 1950s, the olive oil industry was born. To this day, South Africa's olive oils are produced almost exclusively from Italian cultivars.

In South Africa, European olive oils are often cheaper due to farm subsidies, but consumers are beginning to favor local over imported, particularly after reports emerged of fraudulent and chemically manipulated imported oils.

At Rio Largo, a medium-sized producer, Wilkinson blends his oil from Frantoio, Leccino, Coratina and Favolosa olives, using a customized Italian-made extractor with a computerized management system and cameras linked to his adviser in Italy. "It gives me the information I need to be a quality artisanal producer."

Many producers are looking toward export: They can offer high quality at very competitive prices to countries with stronger currencies. "We also have the advantage of being able to market to the Northern hemisphere in August through November, during the heat of their summer and when their stocks are less fresh than ours," Wilkinson says. Rio Largo currently exports 35 percent of its oil, but Wilkinson hopes to build on that.

The industry is attracting a new crop of young producers, such as Hestie Roodt, a fashion designer who runs Lettas Kraal, her family's olive oil business in the Karoo. After an eight-year stint abroad in fashion, she returned to South Africa, and was enlisted by her father to take on marketing and distribution of the oil produced on their farm. Her passion ignited, she soon took over, and now does everything from farm management to extraction and blending, to labeling and sales.

When the family bought the farm, it had been overgrazed by sheep and goats. "There was nothing there, just rocks for miles and miles. But there's a beautiful Italian saying that goes something like this: 'You need stones and silence for olive trees to thrive' … we have all of that." Her father planted Tuscan varieties: FS 17, Frantoio, Leccino, Coratina and a little Mission, which she blends. "It's the high polyphenol count of the Coratina, which gives it its characteristic robustness and bitterness." Most South Africans are still used to softer imported European oils, so education is an industry-wide task.

"Our oil is much like oil from Puglia," she said. "We have similar long dry summers and cold humid winters. This extremity influences the olives and brings out flavors." Roodt is particularly proud of her harvest-to-press turnaround: from tree to mill within four to five hours. "I'm pedantic about it; I'd rather stay and finish even if it's the middle of the night. That's how we derive our quality." Lettas Kraal has won many awards in South Africa, and Roodt hopes to be exporting soon.

If you're visiting Cape Town, Olive Branch Deli is a good place to see the diversity of oils on offer, with about 40 producers represented on shelf. Sibling owners Omeros and Hélène Demetriou know the ins and outs of South African olive oil and are bullish about its future.