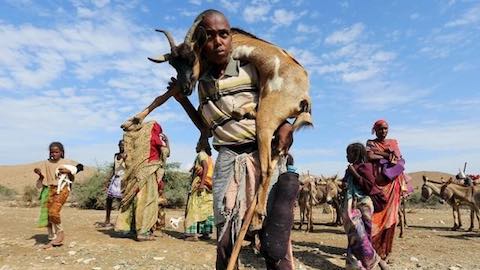 Somalia risks slipping back into famine as worsening drought has left millions of people without food, water or healthcare in a country crippled by decades of war.

Five million Somalis, or more than four out of 10 residents, do not have enough to eat because of poor rains and fighting between the Islamist militant group al Shabaab and Somalia's African Union-backed government.

Famine last struck pockets of Somalia in 2011, killing 260,000 people. It was caused by drought, conflict and a ban on food aid in territory held by al Shabaab.

"The humanitarian situation remains grim for millions of Somalis," the U.N.'s humanitarian coordinator for Somalia, Peter de Clercq, said in a statement.

"We are faced with a slight but steady increase in the number of people in need, and most recently with a significant risk of further deterioration to famine."

Both of Somalia's 2016 rainy seasons were below average and the April to June 2017 Gu rains are predicted to be poor, the U.S.-based Famine Early Warning Systems Network (FEWSNET) said.

"Urgent action to ramp up assistance provision and ensure adequate humanitarian access is needed to address rising levels of food insecurity and mitigate the potential for large-scale loss of life," it said.

In the south, the regions of Bay and Bakool are most worrying, as poor households have had little to no harvest, own few livestock and rely on wage labour which declines quickly during severe droughts, it said.

Half of those who died in 2011 lost their lives before famine was officially declared, a situation that must not be repeated, de Clercq said.

However, while official declarations of famine may encourage awareness and foreign aid, some governments are reluctant to do so because of the negative image.

Many indicators like those seen in Somalia in 2011, such as rising food prices and falling livestock prices, have reappeared, according to FEWSNET.

As crops fail and animals die, people move into towns or across the border to Ethiopia, de Clercq told the Thomson Reuters Foundation in the U.N. compound near Mogadishu's airport.

"They think that is where they're going to find water," he said. "Mistakenly, because that is not necessarily true."

Some 320,000 children under age 5 are acutely malnourished, and 50,000 of them are so severely malnourished they risk dying without emergency intervention.

De Clercq made an appeal for $864 million to provide emergency aid to 3.9 million people.

"Early action is the only way to demonstrate that we have learnt the lessons from the past to avert another catastrophe," he said.

The crisis will be a major test for the new government in Somalia, which is in the process of electing a president.

The government last week announced an inter-agency National Drought Relief Committee to coordinate a response to the drought, which de Clercq called encouraging.

Delivering aid in Somalia is difficult due to violence, kidnapping and corruption. In 2010, a U.N. panel of experts said up to half of food aid to Somalia was diverted to corrupt contractors, al Shabaab and local staff.