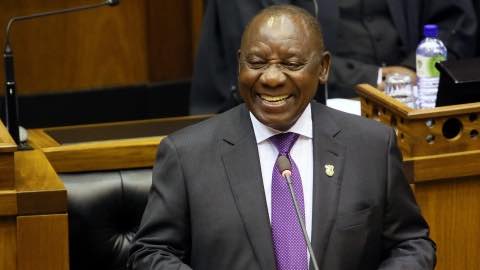 South African President Cyril Ramaphosa's forthright remarks represent a paradigm shift in South Africa's governance and governing principles and provides an opportunity for the United States to reengage with a strategic ally after nearly two decades of eroding relations.

South Africa's recent State of the Nation Address by newly-elected South African President Cyril Ramaphosa outlined many of the challenges that confront his country nearly a quarter of a century after the end of apartheid. These include economic inequality, unemployment, decaying social conditions, and corruption. His forthright remarks represent a paradigm shift in that country's governance and governing principles and provides an opportunity for the United States to reengage with a strategic ally after nearly two decades of eroding relations.

It is only fitting that Mr. Ramaphosa usher in this new era. Once the favored protégé of Nelson Mandela, Ramaphosa was the chief negotiator for the ANC during the Convention for a Democratic South Africa (CODESA) process that effectively dismantled the odious system of apartheid. The institutions established at that time, including a much admired constitution, have flexed their muscles in the past few months exorcizing the corrupt and incoherent eight-year reign of Mr. Ramaphosa's predecessor, Jacob Zuma. The coming months will reveal the depths of corruption that marked the Zuma era and, as the Truth and Reconciliation process salved the wounds of apartheid, provide South Africa an opportunity to set a new course.

The United States should extend its hand to Mr. Ramaphosa and contribute when requested and where it can, not only for some ideal but for its own strategic self-interest. This process will not be easy. After the bloom of the post-apartheid process faded and Nelson Mandela relinquished power, U.S.-South Africa relations began a downward arc. Among the irritants included dismay over President Thabo Mbeki's policies on HIV/AIDS, differing positions on Israel, Palestine, Iraq, and Libya, South Africa's preferred embrace of fellow BRICS countries (most concernedly Russia) and myriad disagreement on trade relations starting with a scrapped regional free trade agreement and more recently, disputes on U.S. chicken exports.

While this trend occurred in both Republican and Democratic administrations, it has been especially fractured during the later years of the Zuma administration. The symptoms included a compulsive attention to protocol over substance, limited access to government decision makers in Pretoria, thinly veiled opprobrium by U.S. diplomats, and an eroded civil discourse that included allegations by high level ANC officials that the United States was intent on fomenting regime change. Well, regime change did occur, and the United States had nothing to do with it. Rather, it was South Africa's independent media, civil society, parliament, and judiciary that waltzed Zuma and his cronies out the door.

So where to begin?

We can start by maintaining our current programs of assistance in South Africa. While we have ongoing military and counterterrorism collaboration with South Africa, laudable U.S. initiatives in health programming like PEPFAR have benefited millions of South Africans. A second area of strength is in trade. South Africa has been the largest beneficiary of the Africa Growth and Opportunity Act (AGOA) by trading 141 items without duty, including automobiles and fine wines. Lastly, over 600 U.S. firms have offices in South Africa and provide a strategic and secure platform to grow U.S. commercial interests on the African continent. Using these as a base, here below are a few recommendations where the United States could advance Mr. Ramaphosa's and its own interests.

First, South Africa is a leader in medical research and life sciences in both the government and private sector. The United States could foster partnerships between U.S. educational institutions and bioscience organizations such as the Biotechnology Innovation Organization (BIO) that could address Africa's vast unmet health needs.

Second, South Africa is the logical platform for U.S. businesses to exploit the Africa continent. Indeed, South Africa's fastest growing trade relations are with its African neighbors. American technical assistance and political capital can be leveraged to support the emergence of African regional integration, a process logically led by South Africa, the continents largest and most sophisticated economy.

Additionally, South African financial institutions, including the Johannesburg Stock Exchange (the world's fourth oldest exchange) can be a conduit for U.S. creative capital going into Africa. Last, with three consulates and Africa's largest embassy in Pretoria, the U.S. government has the platform in which to respond to advise and technical assistance requests by the South African government, private sector, and civil society.

Author: Anthony Carroll is founding director of Acorus Capital, a private equity fund investing in Africa, and a vice president of Manchester Trade Limited, an international business advisory firm. He has over forty years of experience working with Africa and is an adjunct professor at Johns Hopkins School of Advanced International Studies.