Odinga Backs Down in Kenya 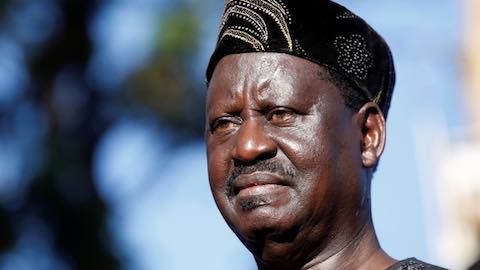 Odinga Backs Down in Kenya

After first declaring that he would be inaugurated as president of an opposition People's Assembly, NASA leader Raila Odinga has backed down, at least for now.

Kenyan opposition leader Raila Odinga's decision to postpone his inauguration as the president of an alternative "People's assembly" for Kenya has, at least for the time being, lowered the political temperature in the country.

Odinga had announced that he would be sworn in as president, based on his claim to have won the original August 8 elections. Those elections, in which the election commission had certified Uhuru Kenyatta as the winner, were thrown out by the Supreme Court as not having followed all the constitutionally-mandated procedures. Odinga and opposition voters subsequently boycotted the election rerun in October and they do not recognize the legitimacy of Kenyatta's victory. Following that election, Kenyatta was sworn in as president and has organized his administration. However, up to half of all Kenyans question or deny the legitimacy of his election and inauguration, according to polling. Spokesmen for the Kenyatta administration said that if Odinga proceeded with parallel inauguration, he would be committing treason, raising the possibility that Kenyatta might attempt to arrest him. In a bitterly divided Kenya, this could provoke widespread ethnic violence, even civil war. (Kenyatta is a Kikuyu, Odinga a Luo; both big ethnic groups are allied with smaller ones). Odinga is still saying that he will proceed with his inauguration, perhaps even before the end of he year.

Why did Odinga back down? Will he continue to do so? The Kenyan press is reporting that some of Odinga's coalition partners, the National Super Alliance (NASA), Odinga's family (especially his wife), and foreign diplomats led by the U.S. ambassador, urged him to pull back from the brink. On Twitter, U.S. Ambassador Robert Godec said, "NASA's decision yesterday (December 10) is a positive step. We again call for a sustained, open, and transparent national conversation involving all Kenyans to build national unity and address long-standing issues." Ambassador Godec and Acting Assistant Secretary for Africa Don Yamomoto are continuing to call for dialogue between Odinga and Kenyatta. However, the Kenyan press is also reporting anger at the postponement among Odinga's grass-roots supporters.

Odinga's spokespeople say that he and NASA want dialogue on security reform, strengthening the judiciary, and greater government devolution. Kenyatta, too, is calling for dialogue, but he has ruled out further talks about election reform, a recurrent Odinga theme. So, if Kenya is back from the brink, the political stalemate continues. Christmas is coming, and much of Kenya shuts down for the holidays. Come January, however, politics will resume. In the meantime Kenya is divided and uncertainty about almost everything is the watchword.

Photo: Kenyan opposition leader of the NASA coalition Raila Odinga at a commemoration of supporters killed by security forces over the election period in Nairobi, Kenya, November 29, 2017. Baz Ratner/Reuters

Africa - "Odinga Backs Down in Kenya"