No Justice in South Sudan 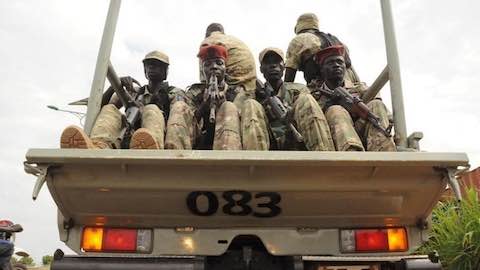 No Justice in South Sudan

The United Nations rebuked South Sudan for failing to pursue justice after grave human rights abuses -- including killings and gang rapes -- were committed during an explosion of violence in the capital Juba.

The South Sudan government spokesman was not immediately available for comment.

"The fighting that erupted in July 2016 was a serious setback for peace in South Sudan and showed just how volatile the situation in the country is, with civilians living under the risk of mass atrocities," Zeid Ra'ad Al Hussein, U.N. High Commissioner for Human Rights, said in a statement.

"In the absence of any semblance of justice and accountability for the violations perpetrated -- including possible war crimes -- such unbridled outbursts of violence could quickly escalate (and) civilians will continue to suffer immensely.

"Concrete steps to halt this downward spiral must be urgently taken, beginning with justice and accountability."

Political rivalry between Kiir, an ethnic Dinka, and his former deputy Machar, a Nuer, led to civil war in 2013 that has often followed ethnic lines. The pair signed a shaky peace deal in 2015, but fighting has continued.

According to the U.N., nearly 1.4 million South Sudanese have fled to other countries and another 1.8 million have been displaced inside the country.

In its report, the U.N. said July abuses were targeting civilians along ethnic lines and women and children were subjected to extreme violence.

On one occasion women and girls were ordered to cook for soldiers when their friends or family members were raped.

The U.N. said most cases of extreme violence were committed by SPLA soldiers, police officers and members of the National Security Services (NSS). According to one testimony, ethnic Nuer men and women appeared to have been particularly targeted.

It called on South Sudan to support the creation and operation of a hybrid court to be set up with responsibilities divided between the African Union and South Sudan, and that all victims of abuses get justice.

Africa - "No Justice in South Sudan"