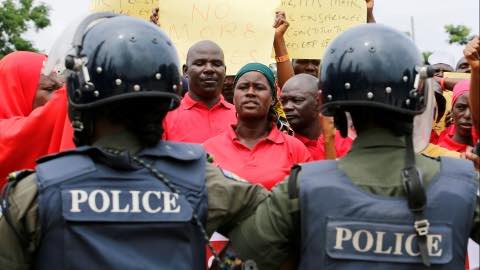 The Boko Haram insurgency in the north is heating up; the ongoing, low-level insurgency in the Niger Delta oil patch waxes and wanes; conflicts over land and water use with ethnic and religious overtones in the Middle Belt at times produces more victims than the conflict with Boko Haram in the north; pro-Biafra sentiments have found new life in the south; and the Islamic Movement of Nigeria (IMN), a Shia group, has become more salient in the Middle Belt and the north, resulting in regular clashes with security services, and the detainment, since 2015, of its leader, Ibrahim el-Zakzaky, despite orders to release him.

These challenges would normally fall under the purview of the Nigeria Police Force (NPF), a national gendarmerie (Nigeria does not benefit from local or state police). The police number some 370,000 with proposals for greatly expanding it, but they are also implicated in many of the country's problems: Boko Haram's early leader, Muhammad Yusuf, was killed in police custody; the police routinely clash with and have killed members of the IMN, whose protests are generally peaceful (though authorities disagree); and the police are struggling to respond to the current kidnapping epidemic. The winner of the election would do well to prioritize police reform.

Chronically underfunded and under-trained, the police are too often unequipped to deal with local security issues, forcing the Nigerian military to step in and establish order. The army is now deployed in thirty of the thirty-six states, mostly doing police work and undercutting the credibility of the NPF.

Unable to perform its basic functions to safeguard the community, the police are often used for VIP protection. To meet the UN recommended ratio of one policeman for 400 residents, the police force would need to add 155,000 officers. This implies a major recruitment and training effort, which the Inspector General proposes would take five years to implement.

Furthermore, police salaries are low. Recruits make less than $400 a year (though they also receive allowances), forcing many police officers to engage in corrupt practices just to scrape by. As part of an effort to address police corruption, President Buhari approved legislation to increase salaries earlier this month. Many Nigerians hope this salary increase will improve the quality of officers in the NPF, but for others, the police's lack of credibility reduces support for their salary increase. As for enhancement of police training, outside assistance is likely required. While in effect, U.S. law precludes our training of police, other partners of Nigeria, notably the British, have long been involved. That effort could be expanded, perhaps with indirect assistance from the United States.

There are numerous proposals for police reform in general circulation. One such reform, which has the support of some governors, is the creation of state police forces to replace or augment the NPF. In the north, vigilante groups, most notably members of the Civilian Joint Task Force, have an established presence in their communities and can be effective instruments of law enforcement, though they are not entirely accountable at present. There are calls for the regularization of their status, either into the army or the police. However, there appears to be little consensus among the Nigerian political class about such measures and are therefore probably too ambitious for an incoming administration.

Photo: A parent of one of the abducted Chibok school girls cries after the police prevented the parents access to see President Muhammadu Buhari during a rally in Abuja, Nigeria. Afolabi Sotunde/Reuters