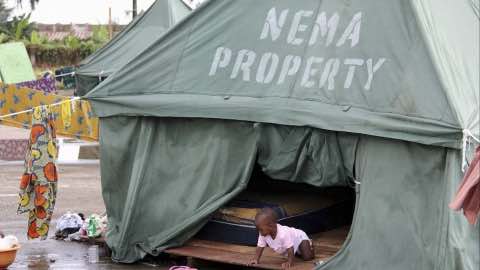 The low-lying coast off the Gulf of Guinea is especially vulnerable to rising sea levels, the Sahara has expanded about 10 percent since 1920, and natural disasters appear to be on the rise. In 2017, flooding affected an estimated 250,000 Nigerians; in 2016, 92,000 were displaced. At the other end of the climate spectrum, up to 40 percent of the country's land area is now estimated to be subject to periodic drought.

Uncontrolled urbanization and rapid population growth, without the expansion of the necessary infrastructure to address them, will exacerbate the destructive force of natural disasters. Nigeria is now about half urban, and the population is expected to grow from 200 million people to perhaps 450 million by mid-century.

Climate change is not a subject of popular debate in Nigeria, but there is widespread discontent with how the government responds to natural disasters. The Nigerian Emergency Management Agency (NEMA), similar to its American counterpart, FEMA, is on the front line of providing relief to the victims of natural disasters and plays a major, if not exclusive, role in the relief of internally displaced persons. Nigerians appear to have a low opinion of NEMA's capabilities. Reform, for its own sake, is badly needed. It will likely require extensive personnel house-cleaning and the assurance of a steady revenue stream. Closer NEMA cooperation with international relief agencies so far as been disappointing, and it might well require presidential leadership, given a general Nigerian aversion, rarely articulated, to partnership with international agencies. But corrupt and weak institutions are notoriously difficult to reform, as the shortcomings of President Buhari's anti-corruption campaign illustrate.

Nevertheless, reforming NEMA should be fiscally feasible and -- important to any incoming administration -- would be publicly visible. Such reforms might be taken by Nigerians as a down payment by a new or a second-term administration for a commitment to more extensive reform. It therefore presents itself as an opportunity to the incoming Nigerian administration to rebuild trust with the citizens it is sworn to protect.

Photo: A child is seen crawling in a tent belonging to the National Emergency Management Agency (NEMA) at a relief centre for flood victims in Igbogene community Bayelsa state. Tife Owolabi/Reuters