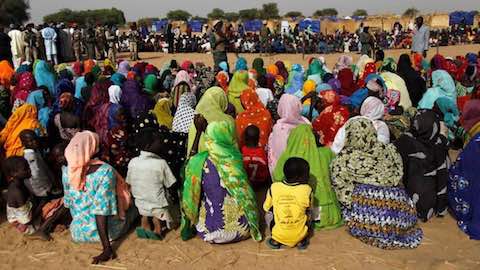 Aid agencies say northeast Nigeria is on the brink of famine after two years of missed harvests, with a third missed year likely.

Hundreds of thousands of Nigerians could starve to death in the famine-threatened northeast due to lack of aid funds, the United Nations warned.

It said almost half a million of the region's most desperate and hungry people could miss out on food aid next month because the World Food Programme (WFP) did not have enough money to feed them.

"We need $250 million to prevent famine in the coming months," the WFP's regional director Abdou Dieng told the Thomson Reuters Foundation in Dakar.

About 4.7 million people in northeast Nigeria - where the jihadist group Boko Haram has waged an eight-year insurgency - need food aid, a number expected to rise to 5.2 million by August, according to the WFP.

Yet a shortfall in funding means the U.N. agency can only provide aid to 1.3 million of those most in need next month, instead of the 1.8 million people it had originally planned to reach, said Dieng.

"If we don't get the funding, hundreds of thousands of people could die of hunger," he said, adding that hunger levels would increase as the rainy season restricted aid delivery and continuing insecurity limited the population's ability to farm.

Aid agencies say the northeast is on the brink of famine after two years of missed harvests, with a third missed year looking likely.

The threat of mass starvation in four countries - Nigeria, Somalia, South Sudan and Yemen - is rising due to drought and conflict, and 20 million people are at risk in what could become the world's worst famine for decades, the United Nations says.

Nigeria's aid response plan for 2017 has received $241 million of a requested $1.05 billion to date, of which the WFP's demand for $300 million to provide life-saving food aid in the northeast has only been a sixth funded.

"Nigeria is not a poor country ... many donors believe that the government should contribute more resources," Dieng said. "But amid its recession (its first in 25 years) and falling oil prices, the country needs help now more than ever," he added.

The conflict with Islamist group Boko Haram, which seeks to establish a caliphate in Nigeria's northeast, began in 2009 and shows no sign of ending. It has killed more than 20,000 people and displaced more than two million.