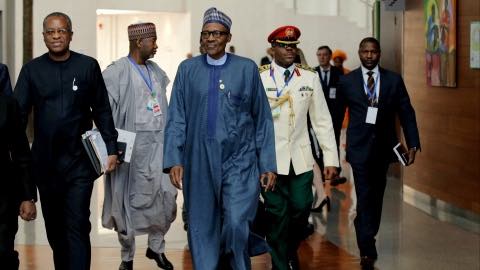 Under Nigeria's custom of power rotation between the predominately Christian south and predominately Muslin north, it is still the north's 'turn.'

The Nigerian political class is deeply engaged in one of its favorite party games: speculating about whether President Muhammadu Buhari will seek reelection in 2019. Given the advantages of incumbency, the smart money says that he will seek reelection and win. Under Nigeria's custom of power rotation between the predominately Christian south and predominately Muslin north, it is still the north's "turn." This means that the opposition People's Democratic Party will likely field a northern and Muslim candidate, but it will be difficult to find such a candidate that could mount a successful challenge to Buhari, a northern Muslim himself.

Within the political establishment, however, many hope Buhari will not run. Former president Olusegun Obasanjo has urged Buhari to step down after his term expires and accused his government of incompetency and nepotism. Obasanjo has also called for the reconstruction of state institutions from the ground up. Former military chief of state Ibrahim Babangida has also urged Buhari not to run.

The three are of the same generation and have dominated Nigerian politics since the aftermath of the 1967-1970 civil war. Babangida was born in 1941, Buhari in 1942, and Obasanjo in 1937. All three grew up during the colonial period and advanced through a Nigerian army that in those days was trained by the British. All three have served as military chiefs of state and Obasanjo and Buhari subsequently embraced civilian democracy and served as elected presidents. None represents a significant break with the past, though Buhari campaigned heavily on an anti-corruption platform.

Discontent with politicians that have "aged in place" is widespread in Nigeria. There are many calls for a Sovereign National Conference to review the country's institutions and perhaps recast its politics, but it is hard to see how such talk will result in concrete action at this stage.

Meanwhile, a Buhari candidacy remains hostage to his health. While he appears healthy at present, during his presidential term he has spent long periods in the United Kingdom undergoing treatment for a disease that has never been disclosed to the public.

Photo: Nigeria's President Muhammadu Buhari arrives for the 30th Ordinary Session of the Assembly of the Heads of State and the Government of the African Union in Addis Ababa, Ethiopia. Tiksa Negeri/Reuters