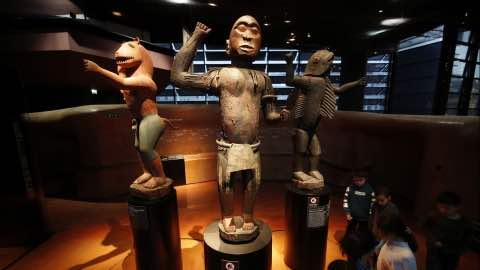 A report commissioned by French President Emmanuel Macron recommends that France should return to Africa art and artifacts held in French cultural institutions.

The report characterizes the collections as part of "a system of appropriation and alienation" that takes away from Africans their "spiritual nourishment that is the foundation of their humanity."

The authors of the report are Felwine Sarr, a Senegalese economist, and Benedicte Savoy, a French historian. As part of his "reset" of France's relations with Africa, President Macron in 2017 said he wanted to start returning African cultural artifacts within the next five years, and has since called for an international conference on the return of African artifacts. However, under French law, the French government is prohibited from returning or "alienating" items in public art collections.

Discussions organized in the Netherlands by the Benin Dialogue Group (BDG), comprising representatives of European museums with significant African collections and Nigeria, produced an agreement to loan artifacts back to Nigeria within three years. The artifacts would be housed at Nigeria's planned Benin Royal Museum. Many of the artifacts in question were looted from Benin City in a retaliatory British raid in 1897.

The Sarr and Savoy report is non-binding and it is unlikely that France will return significant amounts of art to Africa anytime soon. At present, Macron has committed to returning twenty-six artifacts to Benin. But the report, together with the agreement reached by members of the BDG, will likely reinvigorate the long standing debate about the disposition of art and cultural artifacts acquired as a result of colonialism.

At first glance, the return of art to Africa from European or American collections is appealing, the restitution of a cultural heritage looted by former colonial masters. Certainly many of the African objects had a religious purpose. Native Americans have been successful in recovering from American institutions art and artifacts, especially those with a religious value. Similarly, the Greeks have been demanding for years that the British Museum return the Elgin Marbles to the Parthenon in Athens.

Too many museums in Africa lack the resources to protect and care for art and artifacts. There are plenty of examples of works having been stolen from poorly-secured African museums. The hyper-monetization of art makes theft even more likely than in the past, especially in very poor countries characterized by high levels of corruption. On the other hand, art housed at, say, the Musee Quai Branly in Paris or the British Museum in London or the Metropolitan Museum in New York, are secure, cared for, and readily available to the public. There is also the question of where the return of art should stop. Should Italian renaissance altar pieces in American museums automatically be returned to Italian churches? Or El Greco's religious paintings to Spanish churches? Or Powhatan's Mantle, now in England, be returned to Virginia? It can be argued that renaissance art, Dutch old masters, and African bronzes are part of the world's cultural patrimony, not just that of the countries where they were originally created.

Photo: Three large royal statues of the Kingdom of Dahomey, located in present-day Benin, are displayed at the Quai Branly Museum in Paris, France. Philippe Wojazer/Reuters