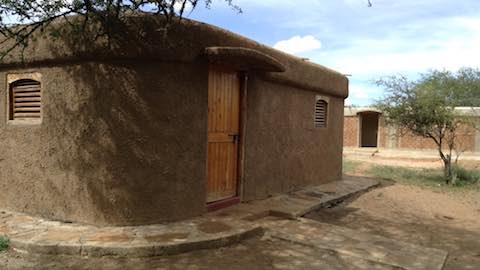 The Twala women's group has decided to add more eco-manyattas on its 40-acre (16-hectare) plot of land in Laikipia County in Kenya's Rift Valley, to expand tourism as a source of income

In the late evening, Eunice Kaparo and Rosemary Nenini finish up their daily cleaning routine in the modern Maasai dwellings, or manyattas, owned by the Twala women's group.

"This is elephant dung -- they destroyed trees last night. They are such a nuisance, but we can't do without them since they attract tourists," said Nenini.

The "eco-manyatta" she's tidying is an environmentally friendly version of a traditional Maasai one-room hut normally built with mud and wood.

The eco-manyatta, a solid structure made of bricks and cement, comes equipped with a solar panel, a digester to produce biogas, a water harvesting tank, and a bathroom with a toilet.

While maintaining the oblong shape of the traditional building, it is well ventilated thanks to windows in the bedroom and sitting area. And solar power means it has lighting both day and night.

"We also have enough time to attend to other chores since we don't have to go and look for firewood or fetch water, as we have a rain-harvesting tank and a biogas digester," said Nenini.

Kaparo said the modern manyattas do not require frequent repairs, whereas traditional manyattas need a makeover every three months and suffer from leaks in the rainy season.

The Twala women's group has decided to add more eco-manyattas on its 40-acre (16-hectare) plot of land in Laikipia County in Kenya's Rift Valley, to expand tourism as a source of income, the two women said.

Since they started welcoming guests in 2007, they have hosted close to 1,000 visitors, they estimate, and can now put up 12 people at a time in the manyattas they began building in 2009.

Kenyans and foreigners are attracted by the opportunity to experience the Maasai tribal culture but cannot be accommodated in old huts due to smoke and poor ventilation, the women explained. Hosting tourists in the modern buildings allows them to gain an insight into the Maasai identity in comfort, they added.

Nina Kosen Soila, managing director of Eco-Manyatta Afrika, the company that constructs the modern huts, said building one traditional manyatta requires three trees, excluding the wood used for repairs. This has had a negative impact on the environment, such as rivers drying up, partly due to deforestation, she added.

But modern manyattas don't come cheap -- including all the additional features, they cost $5,800 each. Kosen Soila admitted the price is quite high but said the company has come up with a way to ease the financial burden.

"We accept payments in the form of bulls, since it's what the Maasais have in plenty," she said. "One mature bull can cost between $490 and $980, so with two bulls per year for a period of five years, a buyer will have cleared the balance."

Building contractor Francis Njuki said the cost of the modern huts will be lower once there is skilled labour to do the work. He is currently training women and young people to bake bricks and put up the eco-manyattas.

John Akaale, minister in charge of culture for the Laikipia County government, said Maasai community members needed to be sensitised to the benefits of the new houses, since they are traditionally a nomadic, pastoralist people.

But many families are now stationary since there is no longer enough grazing land to move around with animals, and children are required to attend school, he added.

The modern manyattas can act as markers, shielding communities from losing their land even if they do move with their herds in search of pastures, he added.

Johnson Sipitek of the African Conservation Centre, an NGO that is collaborating with Eco-Manyatta Afrika on the Twala project, said the green buildings would prove a cheaper option in the long run for pastoralists, as they can provide water for their animals.

More donors should follow the example of the Netherlands and Britain, and fund eco-manyatta projects that help protect the local environment, he added, urging communities to pool their resources to start innovative projects like this that can boost their livelihoods.

Akaale said commercial ventures, such as tourism, would give communities an alternative source of income, making them more resilient to severe droughts, which are expected to increase with climate change.

Kosen Soila said the tourism business of the Twala women's group was bringing more money into the community -- especially to the benefit of women, who are often married early and mostly do not own land -- without altering the tribal culture.

Local women are making profits, which they use mainly to cover household spending, she said.

This can offer girls a different perspective on life, she added. With a higher income, their mothers can pay their school fees and avoid them being married off due to poverty.

"It gives them hope for a better future," she said.